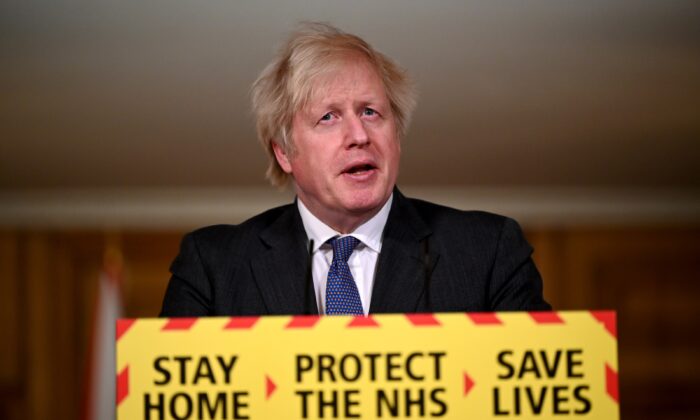 While the war in Ukraine is partly responsible for the cost-of-living squeeze in the UK, the bed for high inflation had already been made following COVID-19 lockdowns and years of big government spending and borrowing, experts told The Epoch Times.

David Paton, professor of Industrial Economics at the Nottingham University Business School, said he believes COVID-19 lockdowns are “the driving force” of the cost-of-living increase.

Ben Harris-Quinney, chairman and research fellow of Conservative think tank The Bow Group, argued that the successive governments’ high taxation, high spending fiscal policy, and the Bank of England’s monetary policy are to blame for the situation.

In July, the UK’s inflation hit double-digits (10.1 percent) for the first time in 40 years, the highest among the Group of Seven nations. The number came down slightly in August to 9.9 percent thanks to lowering energy prices, but food prices kept rising, according to the Office for National Statistics.

Paton said that after paying people to not work and businesses to shut their doors during the lockdowns, the pent-up demand was unleashed when countries opened up at the same time, pushing up the price of oil and other commodities, and at the same time, public purses were lean because of big government spendings during the pandemic.

“You have this sort of perfect storm. Now what’s made it worse is, of course, the energy crisis which is partly related to the war in Ukraine, but the roots of the price increases started with the lockdown policies that many governments pursued,” he said.

It was estimated in March that the UK government had spent between £310 billion to £410 billion on COVID-19 measures, including the support for the NHS, the NHS Test and Trace programme, and support schemes that were designed to compensate individuals and businesses during lockdowns.

The National Audit Office put the estimate of business support cost, which included the £70-billion furlough scheme, at £147 billion.

Paton, who has criticised the government throughout the COVID-19 pandemic for failing to consider the cost of restriction measures, said, “spending that money, especially when [COVID-19 restriction measures] had very little benefit in terms of reducing infection rates as far as we can tell, it was really money the government didn’t have to spend. That’s a big hit and a big hit to the public finances.”

Paton said he believes governments took a view that they could “turn infections off and on like a tap as if they had that power” while “in fact, they have much less power than they thought they did.”

He said governments could have “taken a much more cautious approach which would have been far less damaging in the long run” and focused on more effective measures such as improving hospital capacity “rather than deceiving themselves into thinking they could control infections.”

When speaking of the cost-of-living crisis in the UK, ministers have always acknowledged that it’s partly because the country is dealing with the aftermath of the COVID-19 pandemic, but Paton believes that while the pandemic itself does have an impact on the economy, it’s “absolutely vital” to differentiate that from the impact of political decisions.

“Until politicians admit the differences between those two, I think it’s going to be quite hard to move on and make sure we learn the lessons,” he said.

Harris-Quinney said he believes an earlier lockdown that involved shutting the borders at the start of the pandemic “would have made sense” because it’s the first duty of the government to protect British citizens and “save the maximum number of lives” in a crisis, but “very quickly, we got to a point where the lockdowns were, even if you leave aside the economic question, the lockdowns were killing more people than they were saving.”

While pointing to statistics showing spikes in non-COVID-19 deaths that are partly caused by the delay in tests during the pandemic, Harris-Quinney said he also believes the lives lost because of the economic downturn “will probably eclipse” COVID-19 mortality.

We are now having to “pay for what the government did” because it “chose the option in terms of bailouts and lockdowns and so forth that they felt [to] be most popular at the time,” he argued.

“Now, upon reflection, those policies are becoming unpopular with the public as the public is realizing what the cost of those policies will be and have been,” he said, adding that the government has no defense because ministers “would have known that” but opted to “take a short-term popular decision rather than a long-term responsible decision.”

‘The Most Left-Wing Government in History’

Harris-Quinney said the government’s COVID-19 policies are part of an “array of other government spending which shouldn’t be overlooked.”

He argued that the current cost-of-living crisis “has been caused entirely by the policy decisions of the government predominantly of the last 12 years, but you could say of the last few decades,” such as spending on net-zero, HS2, and foreign interventionism.

According to the latest official figures, the UK’s debt to GDP ratio was 99.6 percent at the end of March.

Harris-Quinney said the Conservative government led by Boris Johnson, who was recently succeeded by new Prime Minister Liz Truss, was “arguably, in very significant areas of government policy, the most left-wing government in history in terms of that approach of taxes and spend,” citing “the highest taxes since the 1950s and the highest spending also.”

He also criticised the successive Conservative governments for allowing the Bank of England to double down on “policies like quantitive easing, which is essentially printing money, which really is the biggest driver of inflation.”

The cost-of-living crisis has been the largest issue debated during the Conservative leadership campaign between Truss and her opponent, former Chancellor of the Exchequer Rishi Sunak.

Truss advocated for a low-tax strategy, saying higher taxation would throttle growth and result in lower revenue when Sunak labeled Truss’s plan “starry-eyed boosterism” that would result in more inflation.

Since Truss took office, she has announced a multi-billion package to offset the cost of energy bills for households and businesses. Chancellor Kwasi Kwarteng is expecting to make an emergency budget statement on Friday, but it’s widely expected that most of the package would be funded by borrowing.

Asked about his views on what the government should do in the cost-of-living crisis, Harris-Quinney said the previous governments have “got themselves into such a mess” that there is no other choice but to help people with their energy bills, but to prevent debt and deficit from spiraling out of control, the new government needs to “make at least 250 billion in cuts” to gain room for a surplus as well as undertaking long term planning such as restoring the UK’s energy infrastructure.

The Epoch Times reached out to The Treasury, former Prime Minister Boris Johnson, and former Chancellor Rishi Sunak for comment.