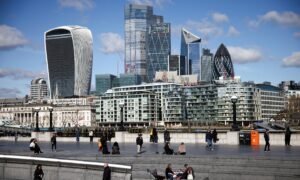 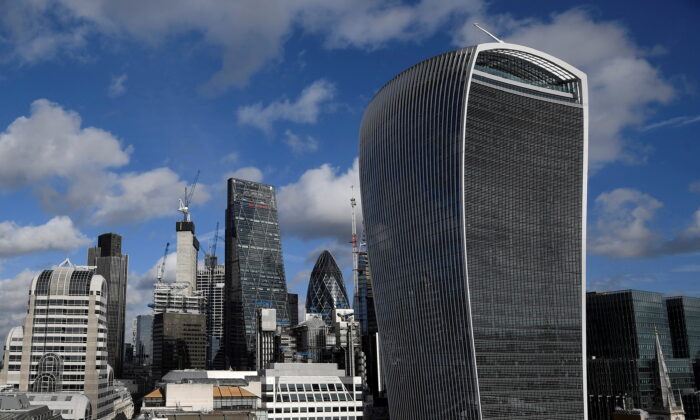 The City of London financial district is seen with office skyscrapers commonly known as 'Cheesegrater,' 'Gherkin,' and 'Walkie Talkie' in London on Jan. 25, 2018. (Toby Melville/File/Reuters)
UK

Lockdowns during the COVID-19 pandemic have given City of London firms a final push toward hybrid working after a “long-term shift” in favour of the flexible model, experts say.

Prime Minister Boris Johnson is poised to move forward with the third stage of his roadmap out of lockdown on May 17, when foreign travel will resume and Britons will be able to meet friends and family indoors.

As restrictions ease, some London-based firms have pledged to adopt a hybrid working pattern in which employees can split their week between the office and home.

HSBC and JP Morgan are among those to announce the shift, with Lloyds Bank confirming it will reduce its office space by 20 percent as working from home becomes a permanent lifestyle (pdf).

Changes like this will have a significant impact on the typically bustling City of London, but real estate experts claim the demand for a five-day workweek “has been reducing for some time.”

David Perowne, the head of City leasing at CBRE, an international commercial real estate services company, told NTD: “There’s been a long-term shift towards a more hybrid model of working. The demand for the five-day working week has been reducing for some time.

“I think COVID has probably got us to a point that we would have got to anyway, but obviously a lot quicker than we would have done otherwise.”

Accounting firm KPMG, based in Canary Wharf, said in a statement it will only ask its 7,300 London staff to work from the office two days a week following the pandemic.

Google has taken a similar stance, yesterday revealing plans to allow 20 percent of its 140,000 employees to permanently work from home starting Sept. 1.

Research by the London Chamber of Commerce has revealed almost two-thirds of employers have allowed staff to work from home at least two days a week as a result of the pandemic.

More than half said they will continue remote working in some capacity once lockdown lifts, according to the research report.

However, not all City of London firms agree with this stance, with Goldman Sachs boss David Solomon claiming remote working is “an aberration that we’re going to correct as soon as possible.”

He said in a conference earlier this year, “I do think for a business like ours, which is an innovative, collaborative apprenticeship culture, this [remote working] is not ideal for us.”

On the other side, Michael Dubicki, director of business development at rental agency Flexioffices, told NTD there is now a “huge focus on giving people the flexibility to re-engage with the working environment on their own terms” following a year of home working.

He added that interest in flexible office space in the City has been slower than in other parts of central London.

“This could be as a result of simple migration of staff into locations easier to commute to or it could be simply to do with the fact companies in the City of London want to be very certain about restrictions easing,” Dubicki said.