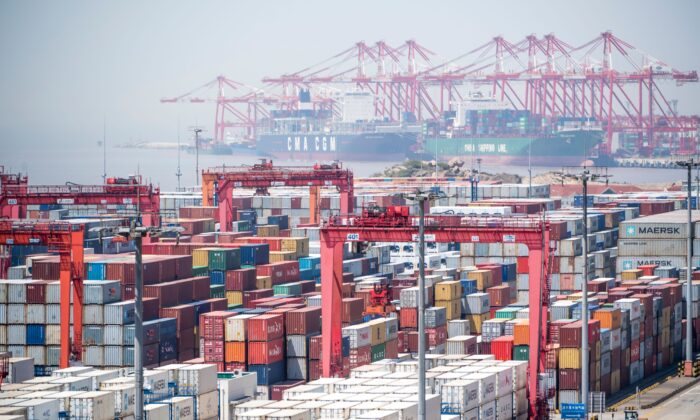 A prolonged citywide lockdown caused congestion in the Port of Shanghai and affected the global supply chain due to the megacity’s influential position in foreign trade and transportation.

Zhang Jinglun, a U.S. financial expert, told The Epoch Times that the Shanghai lockdown, part of China’s intensifying anti-virus measures, is bound to cause disruptions in production and logistics there, and many shipments will be delayed, thus exacerbating the global supply chain and inflationary pressures, especially in the United States, citing, Shanghai’s crucial role in the global manufacturing industry.

According to a survey of 167 U.S. companies conducted by the American Chamber of Commerce in Shanghai, as of April 1, more than half of U.S. multinational companies there have lowered their annual revenue forecasts due to the COVID-19 outbreak in Shanghai, more than 80 percent of manufacturers have reported a shortage of staff and unavailability of raw materials, resulting in slower or lower production, and another 77 percent have expressed dissatisfaction with the length of the quarantine period, Reuters reported.

More than 15 percent of U.S. imports come from China.

U.S. prices have been rising and the inflation rate has exceeded 6 percent for six consecutive months, well above the average target of 2 percent set by the Federal Reserve.

In March the U.S. Consumer Price Index (CPI) rose to 8.5 percent from 7.9 percent in February, a 40-year record high according to data released by the U.S. Department of Labor on April 12.

Doug Barry, spokesman of the U.S.-China Business Council, told Radio Free Asia on April 7 about the difficulties currently experienced by U.S. companies in response to the Shanghai lockdown.

Christmas orders will need to be anticipated before the summer, otherwise, port blockages could result in costly delays and commodity shortages on shelves for the year-end holidays, Barry said.

In June last year, the Yantian port in Shenzhen in southern China was closed for nearly a month due to the COVID-19 epidemic, causing stagnation of tens of thousands of sea containers and obliging many ships to wait outside the port for weeks.

However, the ongoing lockdown of Shanghai would cause an even worse effect.

Although Shanghai port and airport remained open, transportation has been severely restricted due to the blocking of roads, bridges, and tunnels between Pudong and Puxi, the major eastern and western districts of Shanghai, according to the Chinese portal Sohu on April 1.

Relevant data showed that in early March the Shanghai port started to clog up and as of April 1, the number of ships waiting for loading and unloading had increased nearly fivefold. With the large-scale Covid screening occurring in Shanghai, the congestion in Shanghai port will be further aggravated, the report predicted.

According to Refinitiv data, the number of container ships waiting at the Port of Shanghai and the nearby Zhoushan port in Ningbo city has more than doubled since April, almost three times as many as a year ago, Reuters reported on April 13.

Road traffic burdens a major part of freight transport in China. Truck driver movements were kept within bounds by strict quarantine and testing measures imposed by the Chinese government at all levels during the epidemic, making it difficult for many trunk drivers to transfer raw materials and finished products between ports and factories.

In the face of tough port operations and sluggish land transportation, many carriers like Maersk, ONE, and ZIM canceled some routes to Shanghai port and replaced them with railway or waterway services. Other carriers like Hapag-Lloyd, Mediterranean, and CMA CGM also had to transfer dangerous goods and refer containers to other ports for discharge due to entry difficulties to Shanghai port, according to Sina, Chinese media on April 12.

James Hookham, head of the Global Shippers Forum, told the Express.co.uk that the Shanghai lockdown has led to massive cancellations, a surge in traffic, and overwhelming of other international ports.

Spanish financial services firm BBVA said “If Shanghai port stops functioning, it’s difficult for other nearby ports to fill in the void given its gigantic capacity … By then the global supply chain will directly feel the pain of Shanghai’s lockdown.”

In addition to Shanghai, nearby provinces Zhejiang and Jiangsu are also manufacturing hubs in the Yangtze River Delta region, accounting for about one-third of China’s total exports.

Chinese manufacturing accounts for about one-third of the global manufacturing industry data as the United Nations analysis shows.

Taiwan confirmed that 161 Taiwanese companies in Shanghai and Kunshan city, Jiangsu Province, have announced  work stoppages as of April 11.

A spokesman for the International Chamber of Shipping (ICS) told Express.com.uk on April 13 there is a lag in the supply chain and the impact of the China closure is expected to continue to fester in the coming weeks and months, saying that China is the source of many of the world’s trade routes and any disruption to China’s routes will have a global impact.

Michael Wax, CEO, and co-founder of digital freight forwarder Forto told The Loadstar, a news resource for freight and logistics, on April 11, the surge in infections in China and the resulting port congestion will have a domino effect on the supply chain, with the shockwaves expected to spread to the European market in six weeks.