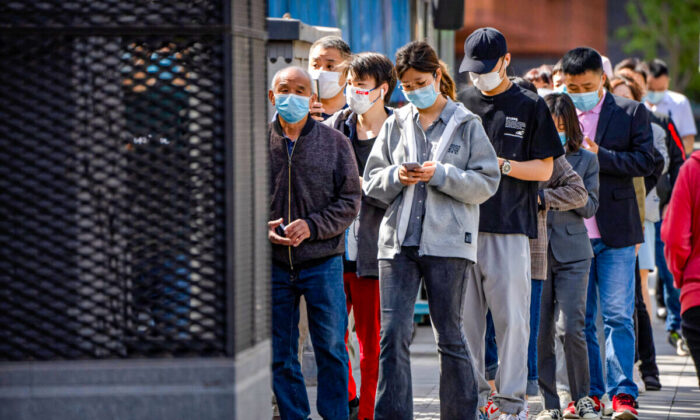 People stand in line for coronavirus tests in a neighborhood in the Dongcheng district of Beijing on April 26, 2022. (Mark Schiefelbein/AP Photo)
CCP Virus

China’s capital city, Beijing, on April 26 started testing most of its 21 million residents, stoking fears that a citywide lockdown was imminent.

Lines formed from the city’s university district of Haidian to Dongcheng, which houses the country’s top officials, with residents waiting for throat swabs.

After recording a handful of cases, the municipal government of Beijing announced late on April 25 that residents in the city’s 10 districts and one economic development zone—covering three-quarters of the city’s population—have to take three PCR tests this week.

Only five districts—less dense in population and located in suburban areas—are currently excluded from the program.

The first district to order mass testing was the most populous Chaoyang, home to foreign embassies and luxury shopping centers, which completed an initial round on April 25. By the evening, more than 52,000 results came out and all were reported as negative, but officials decided to expand the scale of the program to almost the entire city.

Schools, stores, and offices remained open, but parts of the Chaoyang district had been sealed off since April 25. On April 26, the authorities added dozens more residential buildings to the lockdown list.

A Chaoyang resident surnamed Li believes the control measures in his neighborhood will be tightened soon, and that he might be confined in his home as well, because the authorities said the outbreak had been spreading for days before being detected.

A resident in the district of Fengtai, where only two cases have been reported since April 22, was also not optimistic.

She believes the twice-a-decade meeting of the Chinese Community Party in Beijing this autumn, during which Party leader Xi Jinping is seeking an unprecedented third term in office, is partly to blame, as authorities often tighten their grip on the populace ahead of major Party events.

“It could only be tightened,” the woman surnamed Wu told The Epoch Times. She said officials have already doubled down on containment efforts and locked down a village in Fengtai’s Changxindian residential district after a single case was registered on April 25.

The capital city is hoping to contain the fast-moving Omicron variant by acting more swiftly after learning lessons from Shanghai. The financial hub waited for weeks before commencing mass testing of its 25 million residents and imposing a lockdown in late March.

After multiple citywide testings and a month of strict curbs, Shanghai recorded 16,980 cases on April 26. Although residents and experts are skeptical of the official figures, given the regime’s history of downplaying and covering up information about outbreaks across the country, new infections in Shanghai are reportedly hundreds of times higher than in Beijing, which registered 33 cases the same day.

The Chinese regime has held firm to its zero-COVID policy aimed at eliminating the virus through mandatory screening, tracing, and lockdown, despite the high economic cost and human toll.

Having seen the struggles of Shanghai’s struggle to meet the basic needs of its increasingly frustrated 25 million residents, people in Beijing have been stocking up on food and supplies.

For weeks, sealed-in Shanghai residents have taken to social media to voice their discontent and struggles in obtaining basic supplies, only to have their posts quickly wiped in China’s tightly controlled internet. Last week, videos on social media emerged showing residents leaning out of their windows to beat pots and pans in anger, or playing on flutes and trumpets “Do You Hear the People Sing?”—a protest anthem from the musical “Les Miserables.”

Luo Ya, Lin Cenxin, and Reuters contributed to this report.