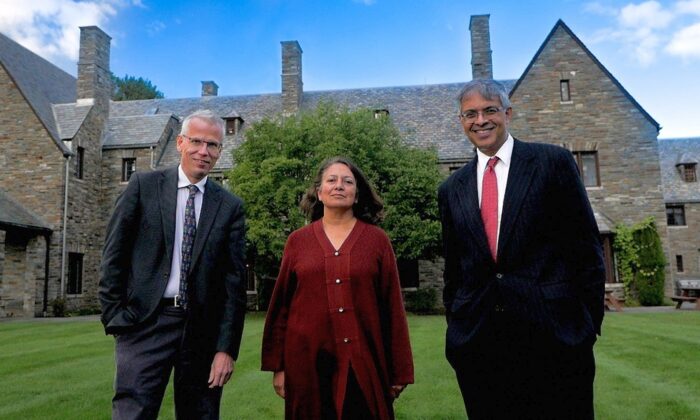 The authors of the Great Barrington Declaration at the American Institute for Economic Research, (L–R) Martin Kulldorff, Sunetra Gupta, and Jay Bhattacharya, on October 2020. (Taleed Brown/[CC BY 4.0 (ept.ms/2htXG3C)])
International

Social media influence helped shape the narrative that shielding the vulnerable while allowing natural immunity to build up was unethical, data expert says
By Jared Gnam

Scientists opposed to COVID-19 lockdowns were viewed as “fringe” partly because those calling for draconian restrictions had more social media influence, a study has shown.

John Ioannidis, a Stanford University professor and expert in medical data science, analyzed the expertise of scientists that signed either the Great Barrington Declaration (GBD) or the John Snow Memorandum.

The GBD, first published in October 2020, called for a more nuanced approach to the one-size-fits-all restrictions that had been imposed on much of Western society. The scientists behind the declaration prioritized the protection of vulnerable people while allowing immunity to build up in the rest of the public to avoid collateral damage on society, education, and public health.

The John Snow Memorandum (JSM) was signed in July 2021 by over 12o scientists as a rebuke to the GBD. The memorandum was printed in the prestigious medical journal The Lancet, which argued that such a policy of herd immunity was unethical.

Martin Kulldorff, a prominent American epidemiologist and statistician, is one of the three authors of the GBD. He told The Epoch Times in February that a key was to “break the pretense” that there was scientific consensus for the lockdowns, which he says there wasn’t.

Ioannidis wrote that he sought to determine whether the “prevailing narrative” that the GBD was only a minority view among experts. In his paper published in BMJ Open Research, he found that “Twitter firepower” had helped shape the narrative.

While Ioannidis said that both letters were backed by well-cited experts, he noted that the JSM signatories had much greater social media influence, which swayed belief that their view had more support.

“Both the Great Barrington Declaration and John Snow Memorandum include many stellar scientists, but JSM has far more powerful social media presence and this may have shaped the impression that it is the dominant narrative,” Ioannidis concluded.

The study notes that the JSM scientists’ Twitter superiority may have also reinforced their argument as superior in news media coverage.

In a darker vein, it may also have been responsible for some bad publicity that the GBD received. The researcher highlighted that Google suppressed the GBD in online searches, while Wikipedia pages for key signatories of the GBD have often smeared their reputations while discrediting their argument.

“This creates a situation where scientific debate becomes vitriolic, and censoring, including self-censoring, may become prominent,” the study reads.

Kulldorff, who has authored more than 201 peer-reviewed published journal papers, told The Epoch Times that the appearance of a scientific consensus for lockdowns was first formed through high-profile U.S. public health officials such as Dr. Anthony Fauci, Dr. Francis Collins, and Dr. Deborah Birx. This led to further stifling from corporate media along with big tech censorship on opposing viewpoints.

Emails uncovered in December 2021 provided the public a first-hand look into how swiftly dissenting voices were maligned.

“This proposal from the three fringe epidemiologists … seems to be getting a lot of attention,” Collins told Fauci in the Oct. 8, 2020, email. “There needs to be a quick and devastating published takedown of its premises. I don’t see anything like that online yet—is it underway?”

Fauci appeared to be on board with Collins’s proposal to tear down the authors and their declaration, sending a one-line reply.

“I am pasting in below a piece from the Wired [magazine] that debunks this theory,” he wrote. Collins replied: “Excellent.”

Within a day of the Collins–Fauci exchange, Google began to censor search results for “Great Barrington Declaration.”

Ioannidis said signatories of the John Snow Memorandum had also contributed to the vilification of authors of the GBD through their tweets and op-eds.

Ioannidis said his study reveals how social media can cause knowledgeable scientists, such as signatories of the GBD, to become victims of misinformation, animosity, and loss of decorum. When prominent scientists have their voices supressed, it creates negative consequences for society, he added.

“The Great Barrington Declaration is clearly not a fringe minority report compared with John Snow Memorandum, as many social media and media allude,” Ioannidis wrote.

“Given the magnitude of the COVID-19 crisis, it is important to ensure that scientific disciplines can collaborate dispassionately and that different views can be juxtaposed and integrated.”