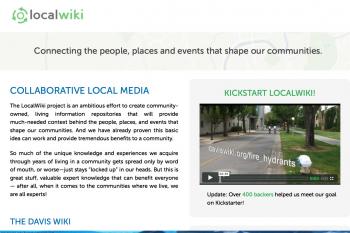 A screen shot of LocalWiki.org. ()
Tech

LocalWiki to Connect Communities in the Digital World

Joshua Philipp
Joshua Philipp is an award-winning investigative reporter with The Epoch Times and host of EpochTV's "Crossroads" program. He is a recognized expert on unrestricted warfare, asymmetrical hybrid warfare, subversion, and historical perspectives on today’s issues. His 10-plus years of research and investigations on the Chinese Communist Party, subversion, and related topics give him unique insight into the global threat and political landscape.
View profile
Follow
biggersmaller
Print
Davis, California, is a quiet town, and about a third of its nearly 65,000 residents are students at the local UC Davis. Each year, a quarter of the student population leaves the town, and a significant portion of information leaves with them.

A realization struck Philip Neustrom and his friend Mike Ivanov, both software engineers—once they left, the information they gained about the community would be lost to newcomers.

Their vision, although unclear at first, would become a technology that rivals Facebook on a local scale and blows even Wikipedia out of the water in terms of user collaboration.

“We were supposed to be doing this research project in math, but we didn’t really spend much time on that, and instead, started this ‘DavisWiki,’” Ivanov said.

Seeing what they were creating, UC Davis wanted to sponsor the project early on. “They saw the value and wanted to, but we really want to keep it independent from commercial interests, or even school interests,” Ivanov said.

“They would have imposed all kinds of rules that we don’t want to be held to,” he said.

DavisWiki started small. It uses the same open source technology at the heart of Wikipedia that allows users to edit content on Web pages.

Neustrom and a few friends began by adding a few bits of information about things they thought were interesting. “…And all of the sudden it just started to snowball as people started to add bits here and there,” Neustrom said. “Now it has information about basically everything.”

At first, users were a bit immature. There were plenty of posts about random things. Some also used it to post rude or defamatory comments. Then users began to document things about the community, and as interest spread, data began to flow in. Its use started with kids at the college, but soon spread throughout Davis.

More users meant more possibilities of use. People now use it as a repository of information on every part of the community. Users add data about everything from local politicians, to lost pets, to the history and ownership of the local restaurants.

The website’s usage is also almost unheard of. “In Davis about one in seven people will contribute back to the wiki in the course of a year, according to our statistics. Just about everyone will use it in about the course of a month,” Ivanov said.

“It’s really kind of unprecedented, and we haven’t really seen the same type of success anywhere else.”

A shift also took place among the users, and people began to take ownership over DavisWiki, updating it and removing spam and vandalism.

“They may never meet in real life, but they know that this is another person in Davis, and it really creates a sense of community online,” Ivanov said. “When you go on this website really feel like you’re getting connected to your local community. You have things on there that are unique to Davis.”

Seeing what they created, Ivanov and Neustrom decided that this was something they wanted to spread to the world.