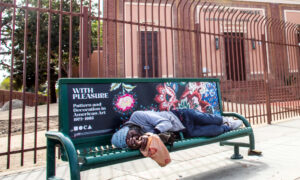 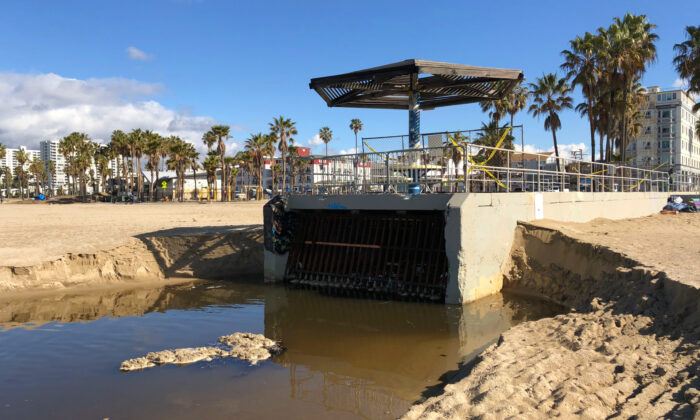 LOS ANGELES—When Brian Averill began surfing in Venice Beach 20 years ago, he said one of the best times to catch a wave was the day after rainfall. It’s not unusual to see beachgoers enjoying a swim or a jog on the first day of sunshine after a storm, but Averill soon realized he was putting himself at risk.

“I would surf after a rainstorm, and I would always get sick, and it took me two or three years to figure it out. And finally, an older surfer said, ‘Do not, don’t go into the water after rain,’” Averill told The Epoch Times. “I would get ear infections, eye infections, sinus infections.”

Why? Because trash, human waste, needles, and other hazardous materials from around the city make their way into the Rose Avenue drainage system, ultimately leading into the ocean.

It’s not a new problem for Los Angeles County communities to deal with hazardous waste discharging out of the storm drains. But residents say proliferating homeless encampments that lack regulations, and street-cleaning rollbacks due to the COVID-19 pandemic, have created an even worse public health crisis—this time, on the world-renowned beachfront—with no end in sight.

“Pesticides, dog waste, human waste, heavy metals, brake dust, and motor oil” are among the things coming through the pipelines from around the city, Averill said—and when it rains, “it basically just shoots straight out into the ocean.”

He said locals typically know the risk and will avoid the beach for a few days after rainfall. But some are worried the pollution could place tourists who don’t know any better at risk. On average, over 10 million people visit Venice Beach and its eccentric boardwalk each year.

Residents, including environmental activist Rick Swinger, are concerned that the city’s growing homeless encampments are increasing pollution—and they point to a large storm drain with steel bars that empties out onto the beach as proof.

Swinger told The Epoch Times he’s concerned because there are human feces in the storm drain, a fact well-known by residents since “tenants and property owners have to hose it down.”

“We have a huge homeless population, and some of them have mental illnesses, like claustrophobia, and they don’t want to go inside a small porta-potty,” he said.

Swinger said he first identified the storm drain as a potential risk for children when he noticed a yellow toy sand bucket awash in the drain’s runoff. “What’s really alarming is that you see that playground over there,” he said, pointing nearby. “Kids come over here and play.”

Soledad Ursua is chair of the community’s Venice Neighborhood Council (VNC). She told The Epoch Times the homeless regularly defecate on sidewalks and residential properties, adding that she’s had to hose feces from her carport more than three times in the past year.

“What you see is that all drains come directly into the ocean. So a way to really mitigate this and to help out is to make sure that we constantly have street sweeping, because anything you throw in the trash is just going to end up here,” she said.

However, street sweeping has been significantly reduced because of the pandemic, she said, adding to the problem.

Averill said the Venice community has been split into two factions over the rising homelessness.

“You’ve got homeless advocates on one side, who are understandably defending these people’s rights. And then you’ve got homeowners in Venice who are scared and fed up. So there’s a new tension in the neighborhood, which is kind of tearing it apart,” he said.

Swinger, who has been calling attention to the growing problem for the last five years on his Facebook page “Stop Illegal Dumping in Venice Beach,” has faced off regularly with LA politicians over their handling of the homeless.

In 2018, he ordered a certified E. coli water testing kit and collected samples from the runoff to send to Schneider Laboratories Global, a hygiene testing lab. The report he received back showed there were levels of E. coli bacteria in the samples.

“This is like Third World conditions. And you can also see the signage here is very poor,” he said, as he stood on the beach near the storm drain.

“We know that human feces can give you Hepatitis A, if you have a cut or you get it in your mouth or whatever. And hepatitis A, to a young kid that their immune system is just developing, can be a death sentence.”

Earlier this month, the VNC passed two motions, calling for the city of LA to restore weekly street cleanings and begin official testing for E. coli, pathogens, and hazardous substances in stormwater runoff. The community group also wants the city to provide clear signage on the beach to warn the public not to swim in the water or walk near the runoff after it rains.

When The Epoch Times visited the storm drain two days after it rained, needles, trash, waste, and other materials could be seen in the runoff.

“If you’re walking on the beach, if you’re a barefoot jogger, you really have no idea,” said Ursua.

She’s documented the runoff flow after it’s rained, she said. “And I’m just horrified every time I come out. I’ve seen children swimming right in front of the runoff in the ocean. I’ve seen people picnicking in the sand next to this. … What we’re asking for is testing in this ponding area and in the sand.”

The city and county have already tested for E. coli in the water and “found high levels there,” she said. Proper signage will let the public know of the potential health risk.

LA County officials told The Epoch Times that the water quality at the shoreline is “routinely tested” and the outfall of the Rose Avenue drain is “regularly cleaned.” Signage is posted to notify the public of the outfall, according to a statement provided by the LA County Public Works Department.

But residents say the signage is unclear, tagged with graffiti, and too distant for people farther on the beach who walk through the runoff.

“All of our elected officials keep talking about a commitment to social equity. This is a great place to start. This is an issue that mostly affects low-income families. They deserve clean beaches,” Ursua said.

The Blue Water Task Force of the Surfrider Foundation supports county and city efforts to test local beaches, focusing on areas with storm drains. According to program coordinator Joshua Pereira, urban storm-drain runoff is “a very complicated and multifaceted issue.”

“When you have runoff, that runoff will tend to be filtered out by the soil. But in Los Angeles, we have a lot of impervious ground surface, with cement and urban construction that tends to prevent that filtration from happening,” he told The Epoch Times.

Pereira said the Blue Water Task Force tests the water to find indicators of bacteria. Bacteria is not harmful on its own, but he said it’s a good indicator of other pathogens and viruses, and other hazards that could be extremely harmful to swimmers.

Pereira said federal permits allow certain pollutants, which are regulated through the Clean Water Act, to be discharged into the ocean through a series of separate storm sewer systems that run throughout the city. As a result, “there’s the chance of exposure to bacteria and other harmful chemicals.”

Following rain, the ocean water is tested along LA County beaches, and bacteria levels are posted on an LA County Public Health website. According to the website, “The Department of Public Health recommends that beach users avoid contact with ocean water for a period of 3 days after significant rainfall, especially near flowing storm drains, creeks and rivers.”

Pereira said the Task Force doesn’t know if there’s a correlation between the homeless population in Venice and increased pollution. “Whatever is going into the ocean from Rose Avenue can come from miles away,” he said.

Though the coastal cities share many of the same issues, “they’re magnified in this part of Los Angeles, in Venice,” he said. “But we all have serious issues. We need to try and help our homeless individuals, and also make sure that they obey the rules that we put out for everybody.”

Brock—who owns an apartment on Rose Avenue in Venice—worries for the safety of his tenants and the potential decrease in property value. He said county leaders aren’t doing the homeless any favors “by leaving them on our streets, by leaving them on the boardwalk in Venice, or in downtown Santa Monica.”

Santa Monica’s drainage system has its own oversight in place. He said the council is coming up with new ways of building reservoirs close to the beach, which is also dotted with homelessness.

“We are doing our best to stop urban runoff from hitting the ocean,” Brock said. “Our storm drains still exit into the ocean, [but] we’re trying to treat that water first. … We try and cleanse it, recycle it, and then use it as gray water.

“I think that’s important, and I think maybe where LA County and LA city have failed is that they’re not treating this water before it gets here.”

LA Councilman Mike Bonin represents the 11th District, which includes Venice Beach. He didn’t respond to repeated requests for comment by The Epoch Times prior to publication.