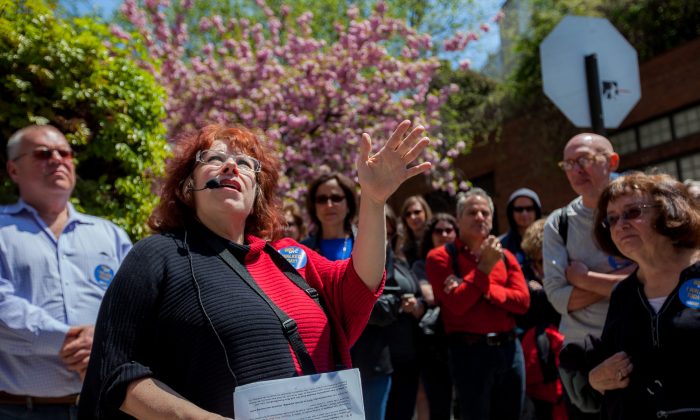 NEW YORK—The West Village in Lower Manhattan must be one of the city’s most loved neighborhoods. It is a primarily low-rise historic district with charming facades, a view of the Hudson River, plenty of celebrities, and streets just slightly off the grid.

“None of this would be here if Jane Jacobs hadn’t won,” said Joan Schechter, who grew up in Greenwich Village and now lives in Chelsea.

Schechter was referring to urbanist Jacobs’s grass-roots efforts to save Greenwich Village from becoming the Lower Manhattan Expressway, going up against then- Commissioner of Parks Robert Moses.

“Talk about David and Goliath,” said Steve Meyer, a programmer working for a financial company in Manhattan with an inexplicable love for architecture and a newfound fascination with Jacobs. “Moses was a man who had all this power, everything, and Jane Jacobs had nothing on her side.”

Meyer, who moved to New York nearly two years ago, has wanted to go on Schechter’s tour of Jane Jacobs’s West Village, but it had been sold out. Schechter is a docent with the Municipal Arts Society, but on Saturday she led a free walk in the West Village in honor of Jacobs’s birthday, a yearly tradition that spans the globe.

Over 130 Jane’s Walks took place in New York City over the weekend. Those leading the walks were New Yorkers who live in, work in, or just want to draw attention to a particular area of the city. Unlike guided tours attended by tourists, locals look forward to Jane’s Walks to learn more about yet-unexplored nooks of this city of neighborhoods.

When Jacobs moved to New York City, she first lived in Brooklyn with her sister Betty. It was the Great Depression, and Jacobs, an aspiring writer, would explore the city between looking for work. Arriving at the Christopher Street subway stop, she fell in love immediately with Greenwich Village, and insisted on moving there.

She resided on 555 Hudson St.—a fact some area residents were eager to point out. By observing the nature of the neighborhood and writing about it, she created the core of what urban planning aims to do today.

Jacobs actually went up against Moses multiple times in the 1950s and 1960s. First she stopped a highway through Washington Square Park. Next she protected people from being displaced from the heart of Greenwich Village. Most memorably she defeated plans for a huge expressway through Lower Manhattan. Thus, the entire neighborhood, now filled with luxury apartments and bike shops along the Hudson, is a testament to her ideas.

In a more tangible form, the plain brick West Village Houses are considered a standing tribute, Schechter said, (although nearly every structure seemed to be accompanied by a lengthy anecdote). Over 20,000 people were buried under Washington Square Park, Weehawken Street is the smallest in the city, and many middle-income residents were longshoremen, so when ships became too big to accommodate in Lower Manhattan, that class moved to the outer boroughs along with the ships.

Jacobs was a proponent of mixed-use and mixed-income neighborhoods driven by community. Spaces like basements and elevators were often crime-ridden, so she did not want them in the West Village Houses. She proposed walk-ups with the laundry room on the first floor and a communal open space between each cluster of buildings, but the designs were continually stripped down due to construction costs.

“The best way to see a city is to walk it, and New York is a very walkable city,” Schechter said.

Jacobs was not an urbanist by training. Her ideas are rooted in looking at how people use space, an idea recent NYU Gallatin School of Individualized Study graduate Michael Ryan took to.

A two-year resident of Astoria Village, Ryan led a walk Saturday morning for a diverse group of New Yorkers. Some had lived in New York for over 60 years, and others were recent transplants. Several have tried to make as many walks as possible over the years. Another asked, “Who’s Jane?”

“They’re talking about first impressions and longtime experiences in the same space, and I think that discussion is the most important thing,” Ryan said. “I think this really whets the appetite for people to [explore the city].”

The village on the Western coast of Queens is one of the oldest in the borough. Established in 1659 by William Hallet and his wife, it was first known as Hallet’s Cove, with narrow streets and gardened mansions. It was eventually renamed in honor of the industrialist John Jacob Astor (who reportedly never set foot in the village), and thrived until development moved away from that waterfront. Some original buildings still survive north of Astoria Boulevard, tucked in between large developments planned for the surrounding area.

“I love New York and I love exploring the city,” said Ginny Donnelly on a walk in Astoria Village. She has lived in the city for 62 years. The walks give Donnelly a chance to see parts of the city she’s never set foot in. She had three or four more lined up for the day.

“I love the diversity—I love things from all over the world and why go out of my way to do that when I can do that with a walk or subway ride?”