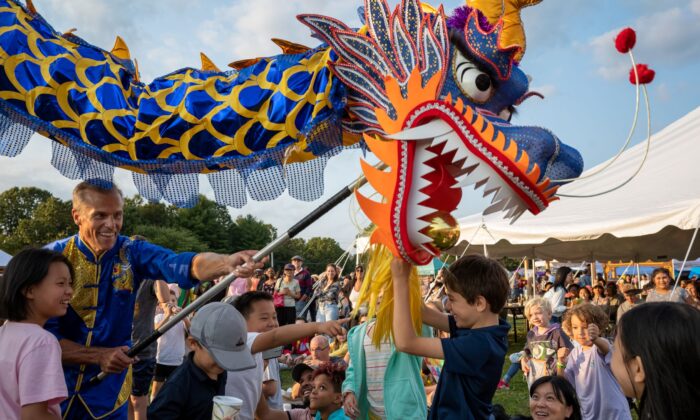 DEERPARK, N.Y.—Betty Bianchi, a resident of Bloomingburg, New York, said she was pleasantly surprised by the wide array of cultural offerings at the annual Moon Festival in the town of Deerpark.

“This is one of few events around here that is cultural-themed, which really brings something new to the area. I know there are so many cultures here and it’s a shame that we don’t see more of this,” Bianchi told The Epoch Times on Sept. 17.

Bianchi’s ancestors were among the first settlers in Middletown, New York, in the mid-1700s. She loves history and enjoyed learning about the Chinese culture, which goes back thousands of years, she said.

The Moon Festival, also known as the Mid-Autumn festival, is a traditional Chinese festival where families and friends gather on the day when the moon is the roundest in shape. Other Asian countries such as Korea and Japan also celebrate it.

This year’s Deerpark Moon Festival has the most variety of cultural programs, Asian food, local vendors, and kid activities, according to Peter Wei, executive director at New Century Film, the organization that hosts the event.

At least 10,000 people came to the two-day event, according to Wei.

“For locals whose families have lived here for 300 or 400 years, Chinese people are newcomers. We want to share with them our culture, so we can understand each other, become one community, and build up together,” Wei told The Epoch Times.

Mary Phillips and her daughter Julia Phillips, both from Port Jervis, New York, also appreciated the cultural elements on offer.

“We have the Fall Foliage Festival and the Christmas Show, but we don’t really have something like this. I love to see international stuff and different cultures,” Mary Phillips told The Epoch Times.

For Jennifer Leon, resident of Honesdale, Pennsylvania, the best part of the event is the food.

Reimfurt also liked the traditional Chinese dance on stage, which she had never seen before.

“It is really cool to see how similar and how different we are. We are similar in that we all use dances to express ourselves, and we are just different in the way that we do it,” Reimfurt told The Epoch Times.

“Beautiful dresses. It’s very traditional. I also saw a little girl running around in traditional outfits, her hair pinned back into a little low bun; her dress was beautiful,” Sam Kressevich told The Epoch Times.

Sam Kressevich’s mother, Lori Kressevich, saw a flyer about the festival at an Asian store in Middletown and brought her two daughters to the event. Lori Kressevich has always been drawn to Asian cultures, having quite a few Asian-styled pieces of furniture at home, she said.

“I like all the vendors and especially the traditional Asian things like the tea sets and jewelry. I just love all of that. I’ve always loved it,” Lori Kressevich told The Epoch Times.

Bob and Dee Steeger, from Warwick, New York, attended the event in 2018 and decided to come again.

The Steeger couple not only enjoyed the on-stage cultural shows but also learned about the worldwide petition drive to end the Chinese Communist Party (CCP.) Both signed the petition.

“I felt like the general population in China was taken advantage of by those in power. I don’t know what can be done about it. But just like the lady told us about the petition said, ‘People have to stand up and do something,’” Bob Steeger told The Epoch Times.

Many Chinese immigrants in Deerpark and surrounding communities had escaped the persecution of people of faith in communist China. Since their arrival in the United States, they have tried to let local people know about the harm of the Chinese Communist Party.

“It is just shocking and melting my heart at the same time,” Mann told The Epoch Times.