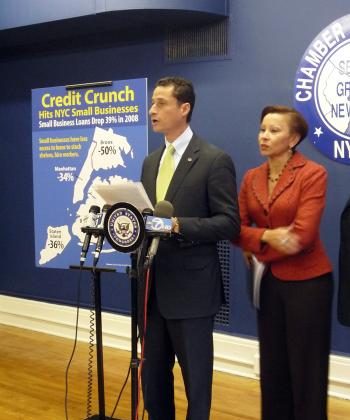 FUND US: Representatives Anthony Weiner and Nydia Velazquez announce a request funding for small businesses. They submitted a letter to the Federal Reserve and U.S. Treasury on Monday, Nov. 24. (Christine Lin/Epoch Times)
US

Christine Lin
Christine Lin is an arts reporter for the Epoch Times. She can be found lurking in museum galleries and poking around in artists' studios when not at her desk writing.
View profile
Follow
biggersmaller
Print
NEW YORK—When the bailout for Wall Street was approved in September, the thinking was that as long as the country's financial institutions are safe, so would be the businesses and individuals who depend on them. But U.S. Representatives Anthony Weiner and Nydia Velazquez say that the funding hasn't trickled down to small businesses, which provide most of the country's jobs.

“So far the Federal Government has given $1.6 billion dollars in taxpayer dollars to big businesses, yet we are still waiting to see a targeted finance program for small businesses,” said Velazquez, who chairs the House Small Business Committee.

Thus, the two have submitted a letter to Federal Reserve Chairman Ben Bernanke and Treasury Secretary Henry Paulson urging them to set aside a portion of money for banks that typically lend to small businesses. Weiner and Velazquez announced their submission of the letter at the Greater New York Chamber of Commerce on Monday.

“This is not bailing out small businesses. The question here is 'how can we get financial institutions to continue to lend?'” Velazquez said.

In New York City alone, loans given to small businesses declined by 39 percent compared to last year—Manhattan by 34%, the Bronx by 50%, Staten Island by 36%, Brooklyn by 38%, and Queens by 44%, according to the U.S. Small Business Administration. “$65 million less in government-backed loans have been given in New York City,” said Weiner.

Small businesses are defined as any privately owned business having 500 or fewer employees. According to the SBA, small businesses account for 99.7 percent of all companies in the United States, pay almost 45 percent of the total U.S. private payroll, and generate 60 to 80 percent of new jobs each year over the last decade.

“Historically, when we have confronted a recession, SBA lending has increased,” said Velazquez. In 1973, the SBA's 7(a) program, which offers long terms and low monthly payments to small businesses, increased its lending by 20 percent. “In 1980, it was up 7 percent; in the 90s, up 11 percent. This time, down 50 percent,” Velazquez said.

Today President Elect Barack Obama named the members of his economic team. Weiner and Velazquez expressed hope that the Obama administration will pay more attention to the needs of small businesses.

“I've sought leaders who…share my fundamental belief that we cannot have a thriving Wall Street without a thriving Main Street; that in this country we rise or fall as one nation, as one people,” Obama said in Chicago.

The President Elect also mentioned the need for a “big stimulus package that will jolt the economy back into shape."