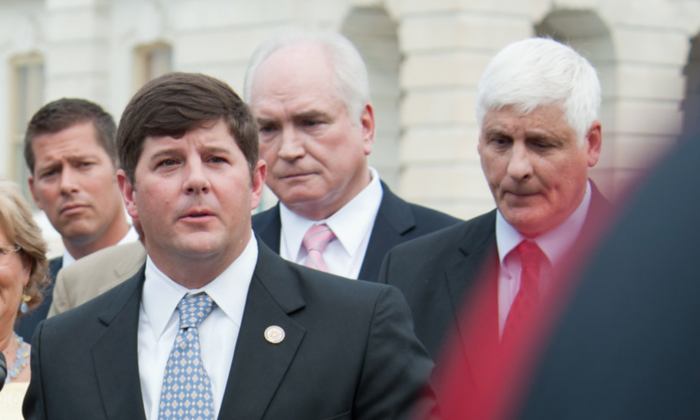 Mike Ezell, a local sheriff, defeated Rep. Steven Palazzo (R-Miss.) in the June 28 GOP primary runoff for Mississippi’s 4th Congressional District, marking the end of a race that intensified after a June 7 primary election split the vote among multiple candidates.

After Palazzo and Ezell finished first and second in the June 7 primary, every other candidate endorsed Ezell.

“We’re just over-the-top excited about the win last night. I’m really thankful for everybody that showed up and supported us,” Ezell told The Epoch Times in a June 29 interview.

He said he had a “brief conversation” with the losing incumbent, Palazzo, last night after the results were announced.

Although the district is a Republican stronghold, Ezell said he isn’t taking a victory in November for granted.

“We’re going to keep working—we’re not going to assume anything,” he said.

The contest has been riven by dueling accusations of corruption and mismanagement.

Ezell, the sheriff of Jackson County, highlighted an ongoing investigation of Palazzo’s alleged ethical lapses, including the personal use of money from his campaign to improve a riverfront property he expected to sell.

The Office of Congressional Ethics (OCE) reported in 2021 that there is “substantial reason to believe” those and similar accusations. The House Committee on Ethics has not yet followed up by forming a subcommittee on the case.

“That’s a cloud that’s been hanging over his head for over a year,” Ezell told The Epoch Times in a June 21 interview.

Palazzo maintained he would be vindicated by a fuller investigation by the ethics committee, saying he would welcome such a move.

In a June 21 interview with The Epoch Times, he called it “a false political attack by my opponents.”

Under Ezell’s leadership, meanwhile, the Jackson County Sheriff’s Department has not been free of controversy.

In 2021, for example, inmates sued Jackson County Jail over alleged civil rights violations, citing lights in their cells that were on twenty-four hours a day.

The Epoch Times has reached out to Ezell for comment.

Some Veterans Wary of Palazzo

Another flash point has been Palazzo’s availability to local veterans. Palazzo is himself a veteran of the U.S. Marine Corps.

While Palazzo said he has helped veterans secure assistance and medals, Ezell has argued that local veterans think Palazzo is hard to reach.

To learn more about what veterans on the ground really think, The Epoch Times randomly contacted veterans’ organizations throughout the district.

While none of the organizations had a stance on the election, individual veterans voiced their opinions in interviews.

They expressed frustration with Palazzo’s leadership in the district, which he began serving in 2011.

“He’s done nothing positive for the veterans—he talks a lot,” said Russell Peters, who spoke with The Epoch Times on June 28 from an American Legion post in Gulfport, Mississippi.

Peters, who said he served in the U.S. Air Force during the 1980s, estimated that eight out of 10 of those at his post support Ezell over Palazzo.

“I’ve never heard of anyone he’s helped,” said Michael Lock, who was reached at a Veterans of Foreign Wars post in Pascagoula, Mississippi, on June 22.

“His office has never returned one of my phone calls,” added Lock, who told The Epoch Times he served in the Gulf War.

Jeff Barnes, a veteran who described serving in both the Gulf War and the Iraq War, told The Epoch Times on June 27 that Palazzo had failed to live up to the promise of his 2010 campaign.

At that time, he ran on the slogan, “Fire Pelosi!”

“The guy he beat, Gene Taylor, even though he was a Democrat, if you called his office, someone from his staff would call you back and would do their level best to help you with their issue,” he said, referring to Palazzo’s predecessor in the district.

He contrasted that with Palazzo, who he said has been unavailable to constituents.

A former coworker of Ezell’s at the Pascagoula Police Department, Barnes had nothing but praise for the candidate.

“Mike Ezell is probably one of the most above-board, honest individuals that I’ve ever met,” he said.

In Barnes’ view, Ezell “does not play games” with departmental subordinates who commit unethical or illegal acts.

In 2015, Ezell fired a deputy who uttered racial slurs while gaming on Xbox Live.

A spokesman for Palazzo said the office had no case files for Barnes or Lock.

“It seems clear they are connected to our opponent and from his area and know him, which leads me to believe this is more about the election and less about any legitimate casework issues they have,” he added.

The Palazzo campaign provided The Epoch Times with the names of veterans they said benefited from the congressman’s assistance.

“I got good help,” said James Harris, Sr., who spoke with The Epoch Times in a June 28 interview. He said Palazzo had helped him with medical claims that had been denied for decades after his stint in the Army during the early 1970s.

He added that veterans seeking help with their Veterans Administration claims should follow up with Palazzo’s office, which he said would monitor those claims.

“He’s certainly No.1 in my book,” said Ken Duncan.

Duncan, who said he served in Vietnam during the Tet Offensive, received a belated Purple Heart for a shrapnel wound he sustained, thanks in part to Palazzo’s help.

Palazzo arranged a large ceremony complete with coverage from local and regional media.

“He wanted to present it [to me],” Duncan said.

Army veteran Steven Stockstill struck a somewhat more neutral tone on the election. He said he didn’t care which candidate won in the June 28 runoff.

“Palazzo is from the coast, and as far as my knowledge, I don’t think he’s been that helpful to anybody I know,” said Stockstill, who spoke to The Epoch Times from an American Legion post in Picayune, Mississippi.

Echoing Barnes, Stockstill added that Democrat Gene Taylor had assisted some of his friends with claims or other concerns.

The winner of the Republican primary is all but sure to sail to victory in the general election as the district is considered safely Republican.