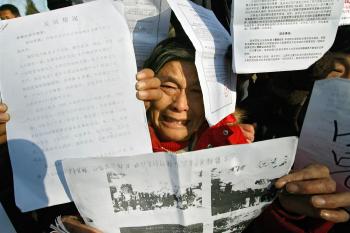 A agitated petitioner shows documents during a gathering in Beijing, 03 December 2007 to protest against corruption and graft ahead of the nation's annual 'legal day'. (Teh Eng Koon/AFP/Getty Images)
China

Local Officials Use China’s Legal System for Own Ends

At midnight on Sept. 15, Mr. Yao Haiying still lingered on the streets of Wuhan, a big city 700 miles southwest of Beijing. He dared not go home, because he did not know whether the police would break into his house and take him away.

He is a reporter working for a local newspaper, the Changjiang Times. His nightmare started with a fairly mundane investigative report he published on Sept. 4. A local company had sued its current and former employees for stealing its commercial secrets for a competitive company in Tianjing, another big city immediately east of Beijing. The focus of the case was whether the shared information was public knowledge or not.

Yao reported that the defendants had been detained as criminals for over six months when the key determination as to whether the knowledge was confidential was yet to be decided. Also, Yao quoted defense attorneys who said that the case should be treated as a civil case, instead of a criminal one, and that detaining the defendants was unnecessary and even illegal.

Mr. Zhang Zhenguo, the head of the local prosecutor’s office in charge of this case, became very angry with this report, and asked his people to find out how this kind of report could be allowed to appear in the newspaper.

Yao understood that, if he were taken away, he would be “accidentally” held in the prosecutor’s detention center for months, if not years, before his case would be officially reviewed.

The Changjiang Times, under pressure from the prosecutor’s office, suspended Mr. Yao’s job on Oct. 12. Out of desperation, Yao posted his experience on the Internet. A regime official happened to read his posting, and ordered the procuratorate of Hubei Province, who is in charge of the local prosecutor’s office, to investigate Yao’s case.

On Oct. 16, the local prosecutor’s office withdrew the legal inquiry letter. Yao’s job was also later restored. However, during a routine company meeting on Oct. 20, he was scolded by his supervisor for an hour because of the “trouble” he caused, and he is still not allowed to write any news reports.

The prosecutorial harassment Yao experienced is fairly common in China. What is extraordinary is that his case was resolved. It has become a showcase for the central authorities’ claim to care for the people’s legal rights.

With China’s expanding economy and widening social inequality, conflicts of interest happen in almost every aspect of society, including inside different interest groups within the CCP.

On the one hand, the CCP hopes to use the rule of law to resolve these social conflicts and resentments. On the other hand, the Party feels it needs a firmer control over China’s legal system so that it can readily crack down on anyone challenging its authority.

To ensure that China’s legal system acts as the Party wants, the CCP has been playing a balancing game for the past three decades. While some China experts praised China’s progress on “legalization” for enacting over 300 laws and regulations in the past 30 years, in fact the CCP’s firm control over China’s legal system was never in doubt.

All of the judges, prosecutors, and heads of the police forces are appointed by the CCP, and they are mostly also Party officials. In many cases, such stress was put on loyalty to the Party in making these appointments that legal education and experience were almost ignored. For example, Ms. Wu Aiying, the minister of China’s Justice Department, started to take part-time law school courses only after she was appointed to that position. In this context, it becomes somewhat understandable why the head of the local prosecutor’s office got so angry when Yao’s report implied that his office did not know much about the law.

Unfortunately, the two roles that the CCP hopes the legal system can play conflict with each other. When CCP officials at different levels are empowered to control the legal system at their levels and below, then it is difficult to limit the use of their power to actions that enhance the party’s authority, rather than their own authority. This problem has led to some legal dramas that have deeply embarrassed the CCP, not to mention the damage done to individuals who happen to fall afoul of an unchecked legal authority.

On Dec. 24, 2007, Mr. Hu Jintao, the head of both the CCP and the Chinese regime, gave a speech at the working meeting of Political and Legislative Affairs Committee (the organization under the Central Committee that is responsible for all law enforcement authorities in China), and called for the judges, prosecutors, and police forces to consider “the Party’s interests as supreme, the people’s interests as supreme, and the Constitution and laws as supreme.” Since then, this speech has been labeled as the great “Three Supremacies” theory, and has been considered as the guideline for China’s future legal reforms.

But such a guideline is obviously incoherent. When a Party official puts his interests in front of those of the people and the laws, one could hardly blame him. He is simply applying the spirit of the great “Three Supremacies” theory to daily life.