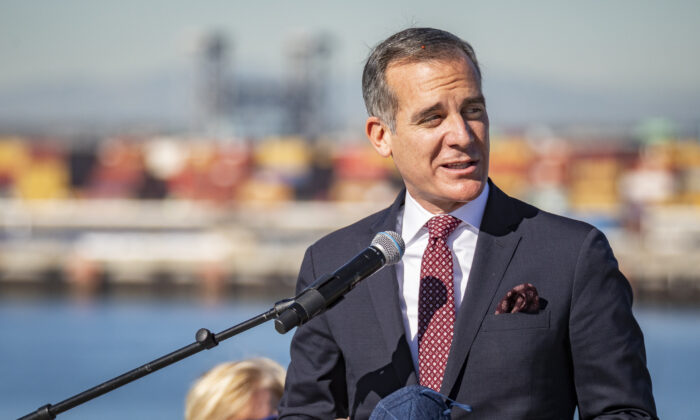 LOS ANGELES—If the Los Angeles Rams win Super Bowl LVI today, Cincinnati Mayor Aftab Pureval will wear a Rams jersey at an upcoming public appearance thanks to a bet he made with Mayor Eric Garcetti.

The bet will work both ways, with Garcetti forced to wear a Cincinnati Bengals jersey during a public appearance if the Rams lose.

The mayors also agreed that the winning mayor will donate and encourage others to donate to the other team’s Children’s Hospital.

“Angelenos fight hard and we win graciously,” Garcetti said. “When the Rams win, L.A. will show our friends in Cincinnati how much heart we have by chipping in together to help the kids at Cincinnati Children’s.”

“In Cincinnati, we’re incredibly proud of our children’s hospital,” said Mayor Aftab Pureval. “It provides world class care to both our residents and families across the globe. This is an opportunity to highlight its incredible work. Cincinnati fans are so passionate about the Bengals and our city that I’m confident they will commit themselves with the same passion to this philanthropic effort.”

Archbishop José H. Gomez of the Archdiocese of Los Angeles is putting a batch of baked treats from the famed L.A. bakery Porto’s on his hometown Rams, while Archbishop Dennis M. Schnurr of Cincinnati is wagering a case of Cincinnati’s own Graeter’s ice cream on the Bengals.

The two archbishops announced their wager Thursday in a joint video post.

“I look forward to celebrating the Rams’ victory with the delicious Graeter’s ice cream that Archbishop Schnurr will be sending my way,” Gomez said.

For his part, Schnurr said, “One of the best parts of the Bengals’ triumph will be digging into the famous Porto’s pasteles and cookies provided by my friend Archbishop Gomez.”

More seriously, the archbishops are also using the game as an opportunity to raise funds for each archdiocese’s Catholic Education Foundation—with the winning team’s diocese getting 60 percent of the money raised and the other diocese getting 40 percent.

They urged potential donors to visit BishopsBigGame.com or follow #BishopsBigGame on social media to donate to Catholic school students in the name of their favorite team.

All proceeds will go directly to the diocese’s respective CEFs, which provide needs-based tuition assistance for students attending Catholic schools.

To get things started, Gomez and Schnurr each made of a donation of $1,000 to the joint fund.

The Los Angeles Zoo and the Cincinnati Zoo & Botanical Gardens also made a bet on the game. The losing zoo will change its logo to the winning NFL team’s mascot on social media for the entire day on Monday.

The Los Angeles Zoo’s current logo incorporates a snake, the California condor, a rhinoceros and a western lowland gorilla to highlight the zoo’s conservation efforts.

Also wagering on the game were Sen. Alex Padilla, D-California, and Sen. Rob Portman, R-Ohio. If the Rams win, Portman will be sending Padilla some

“Hu-Dey” beer from Cincinnati-based Hudepohl Brewing Co. and food from Ohio-based eatery Izzy’s. If the Bengals win, Padilla will be giving Portman a “Whose House” blonde ale from Golden Road Brewing Co. in Anaheim, along with a pastrami sandwich from Westlake-based Langer’s Deli.