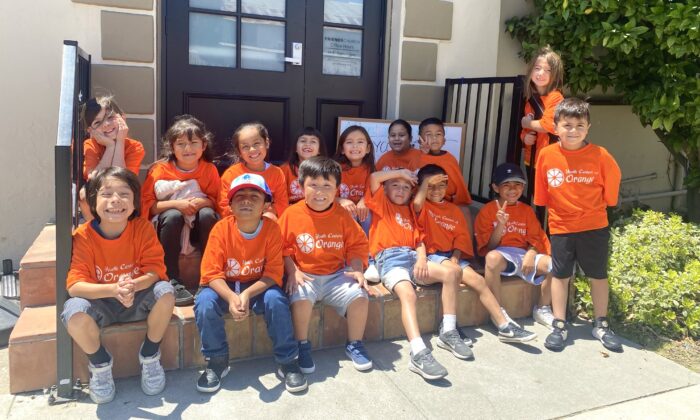 Youth Centers of Orange in the City of Orange, California, has created a space where children and parents of all walks, including those struggling with homelessness and without needed support, have a place to turn.

Founded by Edgar Garnica and Joanna Fermin, the organization does more than provide after-school care for low-income families.

“We try to be a part of the kids’ lives in every aspect, not just [at our site],” Fermin told The Epoch Times.

Their services specifically cater to the needs of families who can’t afford child care on their own.

Recently, a young mother walked through the organization’s doors, after living in her car for weeks with her three children.

In the meantime, the organization took over for the young mother, giving her children a place to spend time and “just be kids” while their mother got the help she needed.

“Their faces just lit up,” Fermin said. “The other kids were so welcoming, and you could just see the light come back to their eyes while they were playing.”

She said that was “one of the most rewarding moments” for her team.

What sets the organization apart from other children’s after-school programs, Fermin said, is its “individualized” approach, going “above and beyond” to help families, most of whom are low-income and often minorities.

Examples include its staff visiting schools and advocating for children and parents on-site, such as translating for non-English speaking parents, attending and cheering on kids during shows and award ceremonies, attending open houses, and offering school pick-ups, among other services.

“I think that takes the burden off of parents rushing to get out of work to pick up their kids on time,” Fermin said.

Having a close channel of communication between the organization and student’s teachers and principals, Fermin said, has played an instrumental role in providing children with needed academic and emotional support amid long working hours for parents, who otherwise may not be able to attend to these needs.

“I think parents are so preoccupied with how to bring food to the table and pay bills that sometimes, it’s the simple things like childcare that are forgotten,” Fermin said.

Such struggles are what led Fermin to take the initiative to start the organization in the first place.

Growing up, Fermin said she often came home to an empty house, tasked with the sole responsibility of caring for her younger sister with a learning disability while her parents worked long hours to provide for their family.

“I would pick [my sister up], lock the doors, and wait for my parents to come home every night,” Fermin said.

Recalling how she “wished” she had a place to go to after school that had her program’s support, Fermin said, is what led her to create her own program.

The organization often has fundraisers to help alleviate the financial strain on parents who can’t afford their services. According to Fermin, this comprises a majority of families in their program.

With childcare in the state costing upwards of $12,000 per year, according to kidsdata.org—a data project focusing on the well-being of California’s children—the organization fills a vital gap in serving low-income families.

And this need is growing, according to Taylor Ferguson, a director at The HUB OC—a local nonprofit which works closely with the organization.

Despite Orange County’s affluent reputation, many in the area struggle to make ends meet, Ferguson said.

The program has seen success in keeping kids on track during COVID-19 lockdowns, Ferguson said, because the organization gave children a place to go even during quarantine.

By creating a space for the children while socially distancing them at their site during lockdowns—as well as following up with kids virtually—many in the program were able to maintain their social skills and “thrive” during the worst of the pandemic.

Their efforts were so effective that Ferguson said she saw children within the organization “[walk] right up to adults and [introduce] themselves” during fundraisers.

“If it hadn’t been for our program, they would have fallen behind like a lot of kids we’re seeing in the classroom now,” she said.

During a recent fundraiser, Fermin said a memorable interaction occurred between a child and a donor when they bonded over their love of Spider-Man.

Following the event, the donor returned to the organization with a surprise for the child: a priceless vintage limited-edition Spider Man comic book, which the donor had worked countless hours to obtain.

“I couldn’t believe he just gave it to [the child],” Fermin said. “[The comic] was worth a lot, and he was happy to give it to him.

The most rewarding aspect of the program, Fermin said, is the sense of community.