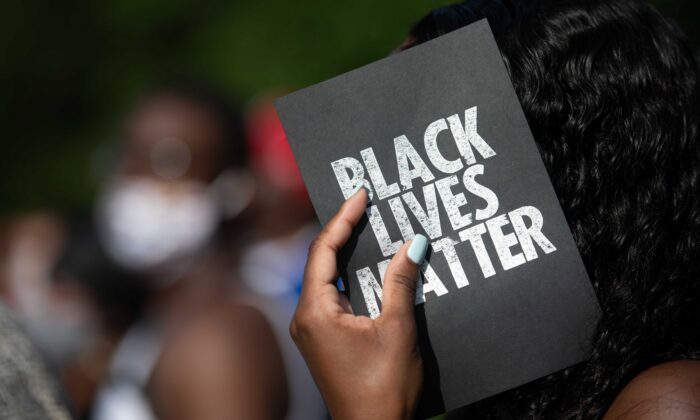 A demonstrator holds a card that reads "Black Lives Matter," outside of the Glynn County courthouse in Brunswick, Ga., on June 4, 2020. (Sean Rayford/Getty Images)
Politics

Ten local chapters of Black Lives Matter have accused the national arm of the movement of undercutting their efforts to democratize decision-making, failing to provide financial transparency, and of lacking accountability.

In the statement, issued on Monday, the local chapters detailed six allegations in support of their overarching critique of the central organizational entity, known as the Black Lives Matter Global Network (BLMGN) Foundation.

They said that Patrisse Cullors, the sole board member of BLMGN, was appointed as the Executive Director of the BLMGN Foundation, a move they said took place “against the will of most chapters and without their knowledge.”

Since Cullors was appointed to the role, two new Black Lives Matter formation have been set up—a Black Lives Matter Political Action Committee and BLM Grassroots—with their establishment taking place without the support and consultation of “the vast majority of chapters,” the statement alleges.

“The formation of BLM Grassroots effectively separated the majority of chapters from BLMGN without their consent and interrupted the active process of accountability that was being established by those chapters,” they said.

Local chapters also complained of being walled off from meaningful participation in the national arm’s decision-making processes, including around the establishment of its political analysis and vision, and that they “have been consistently prevented from establishing financial transparency.”

“For years there has been inquiry regarding the financial operations of BLMGN and no acceptable process of either public or internal transparency about the unknown millions of dollars donated to BLMGN, which has certainly increased during this time of pandemic and rebellion,” they wrote.

In June, BLMGN announced it was launching a $6.5 million fund to support grassroots organizing work for local chapters, noting that affiliated chapters could apply for up to $500,000 in grants, starting on July 1. In their statement, the ten chapters acknowledged this new funding opportunity, which they argued was made possible thanks to local organizing efforts, and criticized the national arm for providing “little to no financial support” since it was launched in 2013.

“This is not the equity and financial accountability we deserve,” the chapters wrote, adding they would provide a more comprehensive statement in the near future that would further detail their issues with the national arm.

BLMGN did not immediately respond to a request for comment from The Epoch Times.

Meanwhile, anti-communist activist, researcher, and filmmaker Trevor Loudon, told American Thought Leaders in an interview that aired on Nov. 29 that he believes the Black Lives Matter movement is a “Marxist operation with deep connections to the Communist Party of China.”

BLMGN board member Patrisse Cullors described herself as a “trained Marxist” in a recently resurfaced 2015 video, while in a 2018 interview with Democracy Now! she called Eric Mann, a former activist with the Weather Underground domestic terror group, “my mentor.”

Cullors, in a June interview on CNN, called Trump unfit for office and said that “our goal is to get Trump out.” In a recent letter (pdf) to Biden and running mate Sen. Kamala Harris (D-Calif.), Cullors said Black Lives Matter and other organizations “invested heavily in this election,” and that the movement’s “electoral justice efforts reached more than 60 million voters.”

Loudon said the broader context for the contested presidential election is an “unfolding socialist revolution” in America, and at stake is whether it succeeds or is successfully resisted.

“This election, the outcome of it, will decide whether that revolution is successful or whether it is beaten back,” Loudon said.

He said the large-scale rioting that unfolded over the summer following the police-custody death of George Floyd is part of a coordinated effort by communist groups to win the election for Democrat presidential candidate Joe Biden and destroy President Donald Trump, who he said has been tough on China and its communist leadership.

He pointed to actions on Trump’s part to counter the plans of the Chinese Communist Party (CCP), including backing an anti-communist candidate in Taiwan’s presidential election and standing with anti-CCP protests in Hong Kong.

“Would you really want Trump to succeed in this election?” he said, referring to China’s communist leaders. “Or would you use your assets in the United States to try and tip the scales in favor of a much more friendly candidate like Joe Biden?”

Besides Black Lives Matter, Loudon singled out a number of other communist-aligned groups in the United States, including the Communist Party USA and the Chinese Progressive Association in San Francisco, claiming, “right under our noses, Chinese-affiliated voter registration organizations are helping to flip American elections.”