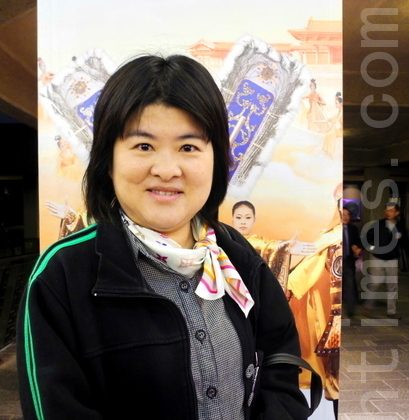 TAINAN, Taiwan—On Friday, the third performance by Shen Yun Performing Arts New York Company at Tainan Municipal Cultural Center Auditorium ended with thunderous applause from the audience. Rui-Yun Zhou, CEO of Yu-Sheng Kitchenware, was absolutely stunned and completely overwhelmed by the performance. “The power of the divine is almighty,” she said.

Ms. Zhou pointed out that she felt an intangible power, a divine power. She also thought that the performance illustrated a clear contrast of good versus evil, commenting, “Falun Gong [practitioners] believe in the existence of Gods and they are kind hearted. Why are they being persecuted? This is completely befuddling to me. I think this simply shows that under the evil nature of totalitarian rule by the Communist Party, people are forbidden to congregate and have freedom of beliefs.”

Shen Yun enacts 5,000 years of traditional Chinese culture, which allows Ms. Zhou to see principles such as benevolence and justice, propriety and wisdom, respect for the heavens, and divine retribution, all come to life, washing over the audience, according to Shen Yun’s program.

Sitting in the front row, Ms. Zhou was able to see the tiniest details of the classical Chinese dance. She said she applauded the Shen Yun performers for their graceful and feather-light movements. At last, she added that she also felt astonished to see the figures on the backdrops flying down to the stage and being turned into real performers.

‘The dancers display uplifted the spirits’

Watching Shen Yun, on Thursday, the first time, former Tainan City Councilor Zhou Mingde praised Shen Yun for bringing ancient Chinese history to the stage, saying the presentation was totally different from what he had imagined and well worth seeing.

Impressed with the Shen Yun performers’ commitment, Mr. Zhou said, “The dancers display uplifted the spirits. What matters is spirit, their commitment is really touching.”

Having seen plenty of dance programs in other parts of the world, Mr. Zhou said Shen Yun set world-class standards and professionalism. “Above all, their commitment impresses me, great devotion!”

He said watching Shen Yun was very meaningful and “well worth watching! I will recommend it to more of my friends.”