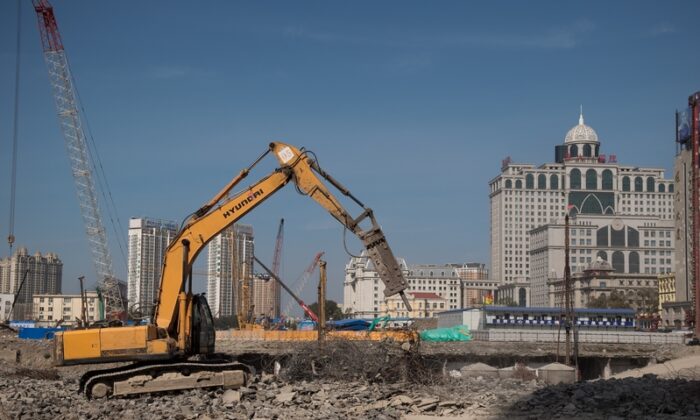 After the outbreak of the CCP virus in 2020, China’s economic growth has been declining rapidly. Various structural problems in the Chinese economy began to erupt visibly in 2021. Among them, the slow sales of real estate have resulted in a sharp drop in the revenue of local governments at and below the provincial level.

China implemented a tax-sharing system reform in 1994, after which the central regime enjoyed an increase in tax revenue, while the local governments’ fiscal revenues fell sharply. A few years later, the increase in land prices driven by the real estate market became a major part of China’s local government revenue.

According to a research report issued by China Yuekai Securities Co., Ltd. on Nov. 2, the tax revenue from China’s real estate industry in 2019 reached 2.6 trillion yuan ($408.8 billion), and the national land transfer revenue stood at 7.1 trillion yuan ($1.12 trillion). The sum of the two is equivalent to 35.2 percent of the sum of the general public budget and the budget of government-managed funds.

Since the third quarter of 2021, China’s land market has cooled down, local land transfer revenue has plummeted, land auctions in less developed cities have been cold, the percentage of land unsold and withdrawn from the market has increased, and the land premium rate has dropped rapidly.

In the third quarter of this year, residential land transfer fees in 300 Chinese cities fell by 36.6 percent year-on-year, and land transfer revenue nationwide fell by 9.6 percent year-on-year. The withdrawal rate of the second round of centralized land sales in 20 key cities was as high as 31.8 percent, an increase of 25.3 percentage points from the first round. Even in Beijing and Guangzhou, where property prices are the highest and the most popular for investment, the percentage of failed land sales has reached 60.5 percent and 52.1 percent, respectively.

The provinces and cities reportedly have cut salaries for civil servants are all areas with high dependence on land sales which previously had low debt liabilities.

According to Yuekai Securities’ report, China’s provinces and cities in 2020 are divided into four categories according to the degree of financial dependence on land sales and their debt ratio. If the median land transfer income dependency is higher than 24 percent median, it is referred to as high land dependency, and if the debt ratio is higher than 100 percent—the international warning line—it is defined as a high debt ratio.

The second category is areas with high land dependence and low debt ratios, which are typically represented by coastal provinces such as Zhejiang, Jiangsu, Shandong, Guangdong, and the city of Shanghai. These are the areas where the news of civil servants’ pay cuts has been reported recently. The land sales revenue in these areas is more directly used for urban infrastructure construction or capital injection to establish local financing platforms. Therefore, the impact of the cooling of the land market on these provinces is mostly reflected on the investment side.

The third category is areas with low land dependence and low debt ratios, with Tibet, Jiangxi, Gansu, and Shanxi as typical representatives. These provinces are relatively less affected by the cooling of the land market.

The fourth category is areas with low land dependence and high debt ratios, represented by western and northeastern provinces such as Qinghai, Ningxia, Hainan, Liaoning, and Inner Mongolia.

China’s dependence on land sales for its fiscal revenues at different levels has its historical background, and the tax-sharing reform in 1994 was a watershed.

On the other hand, local governments also need to find other sources of income to gain greater freedom, and “land finance,” that is, relying on land sales to generate income, arises at that time.

In addition, the real estate and construction industries were the main sources of business taxpayers at that time, while the business tax was exclusive to local governments before the VAT reform, and other taxes and fees were also incurred in the process of land development and operation. Land finance therefore became the key to the operation of the local fiscal system and the foundation for credit expansion.

With the disappearance of China’s demographic dividend, risks in the real estate market have intensified, and high levels of local government debt have also aroused concerns from the outside world.

In a recent article, Bloomberg cited Goldman Sachs’s report, saying that as of the end of 2020, the total debt of Chinese local government financing platforms has increased from 16 trillion yuan ($2.51 trillion) in 2013 to approximately 53 trillion yuan ($8.2 trillion). This is equivalent to 52 percent of China’s GDP and is higher than the debt balance announced by the CCP.

The income from the sale of land is ultimately limited by market demand. Therefore, the Chinese authorities are planning to implement a new policy to impose property tax all over the country.

In an interview with NTDTV, Cheng Xiaonong, an economist residing in the United States, said that the CCP’s sudden roll-out of real estate tax has two purposes: one is to squeeze the real estate bubble and avoid the predicament of the entire economy being hijacked by the real estate bubble; the other is to provide local finances with a stable new income source to replace land sale as the main revenue source.

The Wall Street Journal quoted insiders as saying that Xi Jinping’s idea of ​​levying real estate taxes comprehensively has encountered strong resistance within the CCP. Many high-ranking officials own multiple properties. Xi’s new policy would force them to make major adjustments to their asset management.

As a matter of fact, urban homeowners in China own the dwelling but not the land, and they only have 70 years of land use rights. Considering that most of the property appreciation is the appreciation of land value, the majority of Chinese people oppose the authorities’ plan to levy real estate asset taxes.

Yuekai Securities said in its research report that in the future, local governments in China will no longer compete based on the amount of land they can sell and the favorable policies for different regions, but their overall governance ability and the ability to energize enterprises and high-skilled populations.

But in any case, when China’s economy continues to decline and the real estate market bubble bursts, the Chinese regime, especially those local governments with total expenditure as high as 85 percent of their total revenues, will be under great financial pressure. The salary cuts for civil servants may only be the beginning of the government’s reduction of expenditure. In the future, local governments that are short of money will face huge challenges in how to guarantee “grass-roots operations.”