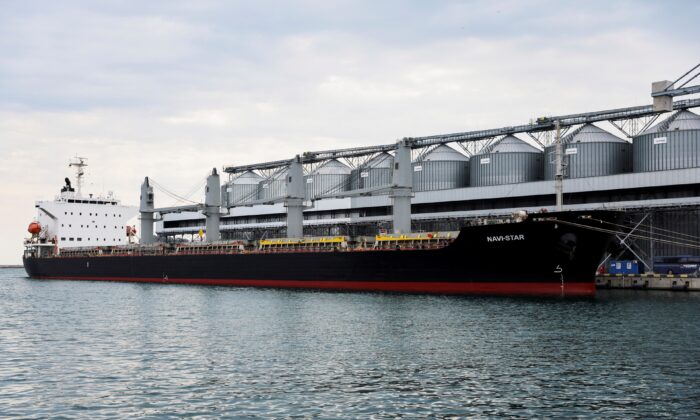 A view shows silos of grain from Odesa Black Sea port, before a shipment of grain as the government of Ukraine awaits signal from U.N. and Turkey to start grain shipments, amid Russia's invasion of Ukraine, in Odesa, Ukraine, on July 29, 2022. (Nacho Doce/Reuters)
Russia-Ukraine War

Lloyd’s of London to Insure Grain Shipments out of Ukraine

One of the key concerns after Russia, Ukraine, Turkey, and the U.N. signed a deal last week to reopen Black Sea ports blocked by five months of war was around providing security assurances to traders concerned about navigating the mined waters.

Lloyd’s said its new export facility will allow vessels transporting grain and other food products from Ukrainian ports to have reliable coverage in place for their voyages.

Patrick Tiernan, chief of markets at Lloyd’s, said the cover would “add essential protections to the deal brokered by the U.N. last week and represents the latest support from Lloyd’s and the insurance industry to help the international community respond to the conflict.”

Ukrainian president Volodymyr Zelenskyy on Friday visited the Odesa region to see a ship loaded with grain as exports resume for the first time since the Feb. 24 invasion.

Moscow agreed not to attack exporting vessels setting sail from ports including Odesa in last week’s deal, but its commitment was thrown into question when Russian missiles hit Odesa hours later.

Truss said: “[Russian President Vladimi] Putin must honour this deal and allow ships to leave Ukraine to help alleviate the hugely damaging impact this war has had on global food security.”

It is hoped millions of tons of grain that have been trapped in Ukraine by the conflict will be released to countries in Africa and the Middle East and help ease an international food crisis.