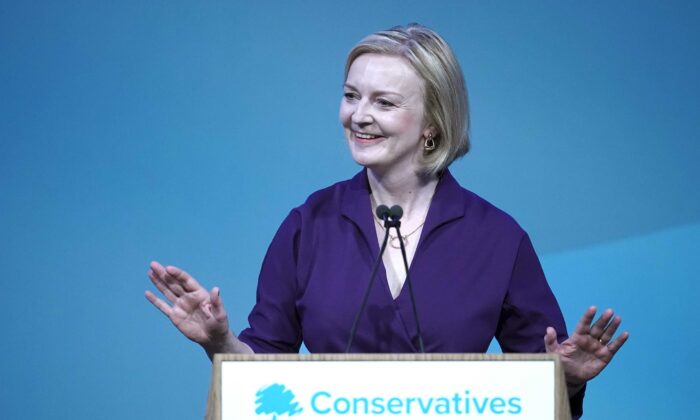 Liz Truss, Britain's foreign secretary is announced as the next prime minister at the Queen Elizabeth II Centre in London on Sept. 5, 2022. (Christopher Furlong/Getty Images)
UK

The UK’s Foreign Secretary Liz Truss is to be the next prime minister after she won the Conservative leadership contest, defeating former Chancellor of the Exchequer Rishi Sunak by a margin of more than 20,000 votes.

She will replace current Prime Minister Boris Johnson, who resigned on July 7 after more than 50 government ministers resigned, saying they had lost confidence in him as leader. It followed Johnson admitting it was a “mistake” to keep Chris Pincher on as a government whip despite sexual misconduct allegations against him.

Sunak was one of the first to resign, along with Health Secretary Sajid Javid, but Truss remained loyal to Johnson until the end.

Truss pipped trade minister Penny Mordaunt in the final round of MPs’ voting in July to make it through to face Sunak, but she proved more popular in 12 regional hustings than the former finance minister among the 172,000 grassroots Conservative Party members.

Voting closed on Friday and Sir Graham Brady, chairman of the 1922 Committee of Conservative backbench MPs, announced the result on Monday.

The Co-chairman of the Conservative Party, Andrew Stephenson, praised Johnson who, he said, had “time and again rose to the challenge” from issues such as the COVID-19 pandemic and the war in Ukraine.

In a speech immediately after the result was announced, Truss paid tribute to Sunak and Johnson, who she said was “admired from Kiev to Carlisle.”

She said the Tory party’s values of “freedom, low taxes, and personal responsibility” resonated with the British people.

She also promised to deliver a “great victory” to the Conservative Party at the next election.

Sunak wrote on Twitter following the announcement: “I’ve said throughout that the Conservatives are one family. It’s right we now unite behind the new PM, Liz Truss, as she steers the country through difficult times.”

Usually the outgoing and incoming prime ministers go to Buckingham Palace to talk to the Queen, who is the head of state, but in a break from tradition they are expected to travel to Balmoral in Scotland on Tuesday to meet the monarch.

Scotland’s First Minister, Nicola Sturgeon, wrote on Twitter: “Congratulations to Liz Truss. Our political differences are deep, but I will seek to build a good working relationship with her as I did with last 3 PMs. She must now freeze energy bills for people & businesses, deliver more cash support, and increase funding for public services.”

Truss is understood to have largely finalised her new Cabinet and is expected to announce her new-look government on Tuesday evening.

It is unclear if Sunak, who was highly critical of Truss during the leadership contest, will be offered a job in the Cabinet.

But one of Sunak’s supporters, former chief whip Mark Harper, urged her to unite the party by picking people from different wings of the party.

Harper told Sky News: “If you’ve got a very broadly-based cabinet—so, accounting for people, not just people who have supported the winner—then that’s most likely to have a unified and cohesive parliamentary party.”

The Daily Express suggested Truss might call a general election in October 2023, on the basis that the economic outlook will be worse by time she is obliged to call it in December 2024.

In 2007, after becoming prime minister, Gordon Brown considered a snap election but decided against it and lost the general election two years later, after Britain was hit by a global financial crisis, while Theresa May opted for an election in 2017, a year after coming to power, but ended up losing her parliamentary majority.

Matthew Lesh, the head of public policy at the Institute for Economic Affairs, said last month whoever won the leadership contest would have an “uphill challenge” to defeat Labour at the next election, considering the economic situation.

The priority for Truss will be tackling Britain’s cost-of-living crisis and especially soaring energy bills.

Last week the regulator Ofgem said British households can expect their average energy bills to rise by 80 percent in October.

Truss Under Pressure Over Energy Bills

Truss made tax cuts her main priority during her leadership campaign but she is coming under intense political pressure to offer consumers help with their energy bills.

On Aug. 15 the leader of the opposition Labour Party, Sir Keir Starmer, said he would freeze energy bills if he became prime minister and said he would fund it by a windfall tax on oil and gas companies.

Asked on Sunday by the BBC’s Laura Kuenssberg what she planned to do on energy bills, Truss said: “Before you have been elected as prime minister, you don’t have all the wherewithal to get the things done. This is why it will take a week to sort out the precise plans and make sure we are able to announce them. That is why I cannot go into details at this stage. It would be wrong.”

But she said she would announce a plan within a week of becoming prime minister.

Another matter in the prime minister’s in-tray is relations with the EU following Britain’s decision to introduce legislation overriding key parts of the Northern Ireland Protocol.

In July the EU launched legal action against Britain over the move.

The Republic of Ireland’s foreign affairs minister has said he hopes “the direction of travel” will change under Truss.

Simon Coveney told RTE he believes Truss is a “talented, very energetic politician” but he said, “Whether the strident way in which she has brought forward the Northern Ireland Protocol legislation in the UK, which, of course, has created a lot of tension and undermined trust, whether that will continue to be her strategy as prime minister or not.”

Stepan Stepanenko, a research fellow at the Henry Jackson Society told The Epoch Times in August that British universities and businesses would lose out unless Truss could resolve the row with the EU over the £80 billion Horizon Europe academic funding programme.