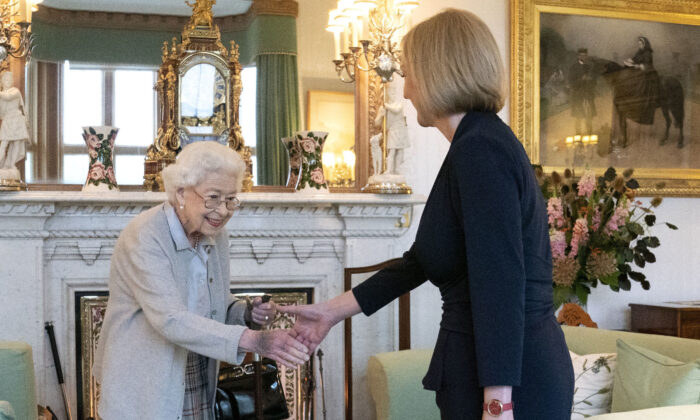 Liz Truss has officially become the new prime minister of the UK after meeting Queen Elizabeth at Balmoral Castle in Scotland.

She has become the UK’s third female prime minister, and the 15th premier of the Queen’s 70 years on the throne.

In a statement, Buckingham Palace said: “The Queen received in audience The Right Honourable Elizabeth Truss MP today and requested her to form a new administration. Ms. Truss accepted Her Majesty’s offer and kissed hands upon her appointment as Prime Minister and First Lord of the Treasury.”

Earlier, Boris Johnson also had an audience with the monarch to tender his resignation.

Johnson and Truss had to travel to Balmoral rather than Buckingham Palace in London for the royal audience, in a break from tradition, because the Queen has been suffering from ongoing mobility issues.

Truss, who served as foreign secretary in the Boris Johnson administration, became the leader of the Conservative Party on Sept. 5, after defeating her rival, former Chancellor Rishi Sunak, in a bruising leadership campaign.

Following the official appointment as prime minister, she will travel back to London and address the nation from Downing Street in the afternoon.

The new prime minister is facing mounting challenges, with rising energy bills, train strikes, and both a winter crisis in hospitals and a recession looming, not to mention the ongoing conflict in Ukraine.

Her first major policy priority will be delivering a package of support for households struggling with energy bills which are set to soar even higher next month.

Earlier, Johnson used his farewell speech in Downing Street to call on the Conservative Party to unite behind his successor.

Johnson said he will be offering Truss’s administration “nothing but the most fervent support.”

He said: “What I say to my fellow Conservatives—it’s time for politics to be over, folks. It’s time for us all to get behind Liz Truss and her team and her programme and deliver for the people of this country.”

He added that if his family dog Dilyn and the Downing Street cat Larry “can put behind them their occasional difficulties, then so can the Conservative Party.”

Johnson expressed his confidence in the new government’s ability to deal with the challenges, especially the cost-of-living crisis, saying the UK has the “economic strength to give people the cash they need.”

“I know that Liz Truss and this compassionate Conservative government will do everything we can to get people through this crisis and this country will endure it and we will win,” he said.