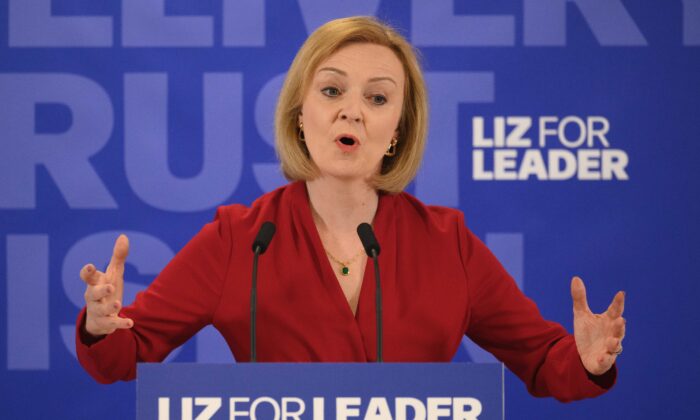 Conservative leadership candidate Liz Truss speaks to supporters and journalists as she launches her campaign to become the next prime minister in London on July 14, 2022. (Leon Neal/Getty Images)
UK

Attorney General Suella Braverman has been knocked out in the second round of voting for the leadership of the Conservative Party with Rishi Sunak opening up a lead on his rivals.

Rishi Sunak leads the field in the race to find a replacement for Boris Johnson, who resigned as Britain’s prime minister last week.

He got 101 votes on Thursday, ahead of trade minister Penny Mordaunt on 83 and Foreign Secretary Liz Truss on 64.

The former equalities minister Kemi Badenoch got 49 votes and backbencher Tom Tugendhat got 32 but they could come under pressure to drop out before Friday’s televised debate between the remaining leadership contenders.

Braverman, with 27 votes, drops out.

Earlier Truss set out her stall with a major speech, in which she defended her decision not to quit the Cabinet after Sunak and Health Secretary Sajid Javid resigned.

Truss said: “I am a loyal person. I am loyal to Boris Johnson. I supported our prime minister’s aspirations and I want to deliver the promise of the 2019 manifesto. What we need to do now is deliver, deliver, deliver, and I am the person in this race with the record of delivery.”

She also had a veiled dig at Sunak, saying, “Now is the time to be bold, we cannot have business-as-usual economic management, which has led to low growth for decades.”

Her supporters, who were present, included Culture Secretary Nadine Dorries and Work and Pensions Secretary Therese Coffey, Business and Energy Secretary Kwasi Kwarteng, and former Tory leader Iain Duncan Smith, who was ousted from the job in 2003 without even being given the opportunity to fight a general election.

Mordaunt came under attack from former Brexit minister Lord Frost, who worked with her during the post-Brexit trade negotiations and told TalkTV: “I felt she did not master the detail that was necessary in the negotiations last year. She wouldn’t always deliver tough messages to the European Union when that was necessary. She wasn’t fully accountable, she wasn’t always visible. Sometimes I didn’t even know where she was.”

There will be a further ballot on Monday and there could conceivably be a final one on July 21.

Party Members Will Get to Choose From Final 2

The final two will make it onto a ballot paper which will be sent out to members of the Conservative Party who will then choose the winner, who will be announced on Sept. 5.

Johnson won a landslide election in December 2019 but resigned last week 48 hours after Sunak and Javid started an avalanche of ministerial resignations that fatally undermined his position in 10 Downing Street.

Johnson’s position, which was already weak after he was fined by the police over partygate, was made untenable by revelations about Deputy Chief Whip Chris Pincher.