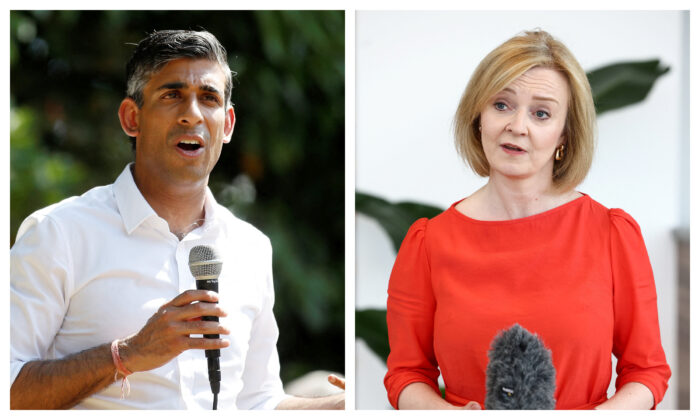 The UK’s Conservative leadership contenders Liz Truss and Rishi Sunak both sought to win the support of rural party members on Friday as they race to replace Prime Minister Boris Johnson.

Next week, ballots will arrive at the doorsteps of grassroots Conservative Party members, who are widely expected to cast their ballots early instead of waiting until the Sept. 2 deadline.

Both writing in the Countryside Alliance’s magazine on Friday, Truss cited her experience as the environment, food, and rural affairs secretary, saying she had “championed” British “towns, villages, and hamlets” for two years.

The foreign secretary said if she becomes the prime minister, she will scrap government-imposed “top-down housing targets” and give planning powers back to the locals so they can “grow organically and meet local needs.”

Promising to boost the UK’s domestic food production such as horticulture and seafood, Truss said she will “streamline the inspection regime for UK food producers by removing red tape, reducing costs, and having a greater role for earned recognition.”

She also vowed to include farmers and land managers in the environmental land management schemes to “harness their skills for landscape-scale conservation—using their expertise and common sense.”

Sunak said in his article that he is “proud” to represent the rural constituency of Richmond since 2015 and campaigned “on the issues that matter to local people—including faster broadband, safer roads, and better health care.”

The former chancellor promised to “always back our farmers,” saying food production and food security have “never been so important” and that the rural communities are “part of the solution to the environmental challenges we face, not the problem.”

In a separate interview with The Telegraph, Sunak said he would prioritise farmers in trade deals.

Sunak, who has consistently trailed behind Truss in polls, is facing an uphill battle as his opponent gained two major endorsements on Friday ahead of what’s expected to be a crunch weekend.

Defence Secretary Ben Wallace said Truss is “the only candidate who has both the breadth and depth of experience needed” to confront the challenges the UK is facing, while former candidate Tom Tugendhat wrote in The Times of London that he saw a “firm” leader in Truss.

In another bid to woo party members, Sunak vowed to review the 2010 Equality Act, which he said “has been a Trojan horse that has allowed every kind of woke nonsense to permeate public life.”

“Our laws must protect free speech, block biological men from competing in women’s sport, and ensure that children are allowed to be children,” he said.

Truss has also spoken out in favour of single-sex spaces, telling a hustings audience on Thursday that she backs a policy that guarantees schoolgirls can go to a toilet in a safe environment.