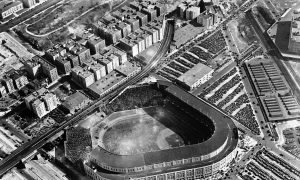 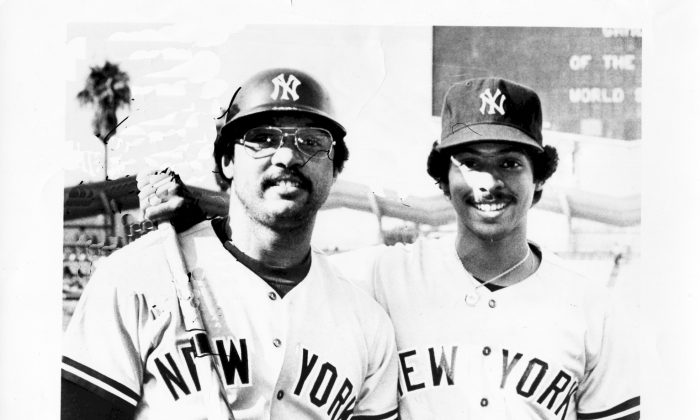 Living the Charmed Life: Confessions of a Former Yankees Batboy

NEW YORK—While some serious sports fanatics pay good money to enjoy a week at baseball fantasy camp, very few actually get paid to live the dream of rubbing shoulders with their heroes on a daily basis.

As a teenager growing up the Bronx, Negron’s life might have gone a bad way the day he was caught vandalizing Yankee Stadium. But he was in luck—he wasn’t stopped by police, he was caught by none other than Yankees owner George Steinbrenner.

“He [Steinbrenner] caught me doing graffiti right over there,” said Negron, now a successful author and movie producer, as he motions to a site on the grounds of where the old Yankee Stadium once stood.

“He had me locked up, and then he came back, got me out, took me to the Yankee locker room and he made me the batboy that night,” recounts Negron.

“He told the equipment manager, ‘Give him a uniform. He’s got damages he’s going to work off!'”

The punishment soon turned into a dream job as Negron became the Yankees everyday batboy—and later an assistant to Steinbrenner himself—in a clubhouse that would include legendary players like Reggie Jackson, Thurman Munson, Catfish Hunter, Bobby Murcer, and manager Billy Martin.

The players—untouchable stars to their millions of fans—were a part of his daily life. And they made him feel like part of the team.

“One time we were on a bus—all the Yankees—the ’77 Yankee team and me,” said Negron, recalling a memorable mix-up on the way to a game.

Catfish Hunter apparently didn’t see him board the bus.

Negron, who was sleeping in the back, woke up and assured Hunter he was there.

The simple gesture was not lost on Negron though. “I cried because they thought of me that much that they would make that bus stop like that.”

These days Negron, 59, brings hundreds of Hanks Yanks little league players to the grounds of old Yankee Stadium—now reduced to three sandlot diamonds, a track, and a soccer field—to teach them about the hallowed land they’re fortunate enough to be playing on.

On this day, there are only a handful of players there. Nonetheless, Negron wastes no opportunity to teach them some Yankee lore.

“Do you guys realize where you are right now?” said Negron to the little leaguers in the dugout. “Do you understand who played here before you?”

The kids know who Ruth is. They also know who Lou Gehrig is, as well as Reggie Jackson. But when asked about Munson, they slowly shrug their shoulders and look at each other with quizzical faces.

“You gotta find out who Thurman Munson is,” said Negron to the attentive kids. “He was a champion and he was a leader.”

“I used to go with Thurman to that McDonald’s right over there before he died,” said Negron pointing to the street that runs by Yankee Stadium. “He used to eat cheeseburgers there and he used to buy hamburgers for all the Dominican kids in the neighborhood.

“That’s who Thurman Munson was.”

While Munson’s baseball career was cut short by tragedy, Negron’s once-promising start never really got going in the first place. A second-round pick of the Pittsburgh Pirates in 1975, his brief minor league career lasted just two games in which he recorded seven at-bats, one base hit, and an RBI.

But he doesn’t say much about his time as a player. “When I proved to America that I couldn’t hit they sent me back to the Yankees.”

It seemed to work out for him though.

Back in New York, Negron made the most out of his connections with the Yankees.

Now an author of four books and a member of the Screen Actors Guild for more than 25 years, Negron has appeared in numerous television commercials and motion pictures like “The Cotton Club,” directed by Francis Ford Coppola.

Just like he never actually applied to be a batboy, Negron wasn’t exactly “discovered” by a Hollywood talent agent either to get his start. He had connections to a famous friend—prodigious Yankee slugger Reggie Jackson, now his oldest son’s godfather.

It all started when Negron was noticeably depressed on a mid-August day in 1977 after hearing the news that Elvis Presley died. When Jackson stopped by and asked why the sad face, Negron told him of the passing of ‘the King.’

“You don’t think I’m like ‘the King?'” said Jackson, then in his first season in the Bronx and before he was known as “Mr. October.”

“Not really,” said Negron. “Whenever Elvis worked on a movie, he always had his guys work with him.”

Jackson—never one to be outdone—picked up the phone, called his agent, and just like that, Negron had a part in Reggie’s Volkswagen commercial.

“And so that started a whole thing where I ended up landing a movie role working for Warner Brothers,” said Negron, who produced the 2014 animated film “Henry & Me” based on Negron’s own book “Boy of Steel.” It stars Negron’s now longtime friend Richard Gere—who Negron met while filming “The Cotton Club.”

One of the fondest relationships Negron had was with former manager Billy Martin. “He was my father,” said Negron when asked of his relationship with the fiery Martin who had a tumultuous five tours of duty as manager of the Yankees—each resulting in his dismissal by Steinbrenner, who was publicly famous for high expectations and frequent personnel changes.

“Billy was the one guy who initially made me feel—next to George [Steinbrenner]—like I was important,” said Negron, who is still close to Martin’s son, Billy Jr.

“He took me to have dinner with Frank Sinatra and Sammy Davis, Jr.,” said an awed Negron.

“We went to Patsy’s on Broadway.”

The Bronx Was Burning

Working in a clubhouse with loose cannons Steinbrenner and Martin—with allegiances to both of them—was sometimes problematic. It nearly got him fired on one occasion in 1978 during spring training.

Steinbrenner had Negron waiting by the phone in the clubhouse during this time.

“George tells me, ‘Stay close to the telephone in the clubhouse, because I may need you.'” recounted Negron. “He had a lot of important guests coming in and out, in and out all week.”

After three days of this, Billy Martin suddenly ran in, needing a favor—badly.

“I need you to run to my hotel. I left my game notes next to the bed. Can you pick them up for me and bring them back?” said Martin.

But as he gets back, the traveling secretary, Bill Kane, alerts him that the volatile Steinbrenner was looking for him and wasn’t happy.

“Where the [expletive] were you? George is going crazy! Get up there as quickly as you can!” screamed a worried Kane.

When Negron got upstairs Steinbrenner was in the middle of screaming at team President Al Rosen. “You really f-ed this one up! I can’t believe that you got this player to play third base and he stinks!” yells Steinbrenner.

Rosen walked by Negron on his way out, tossing him a “good luck” as he passed.

Steinbrenner called a hesitant Negron over and started off talking very mildly. The Boss rarely screamed at him.

“Where were you?” said Steinbrenner.

After explaining that Martin needed his game notes, Steinbrenner asked, “Who signs your checks?”

“You do.” said Negron

“Okay good. Go back to your hotel. Pack your stuff. Get to the airport … I never want to see you in Yankee Stadium again.”

So Negron does exactly that, and for an instant it seems his dream job may have abruptly ended. But while he’s waiting at the airport, he suddenly hears his name over the intercom: “Ray Negron to white courtesy telephone.”

“I’m at the airport, just like you said,” answered Negron.

“Well get your [expletive] back over here and come right to me! Not to Billy Martin, not to Thurman Munson, and not to Reggie Jackson, but to me!”

Fortunately for Negron it was one of the few dust-ups in his time with Steinbrenner, whom he greatly appreciated for giving him a better life. Not that the multimillionaire Steinbrenner had always realized it.

“One time we’re driving around there [the stadium],” said Negron about a time he and Steinbrenner were driving in a depressed area in the Bronx.

“You see how lucky we are?” said Steinbrenner looking at the depression.

“Boss, after the game tonight I still have to come back to this,” said Negron, who had several cousins live their lives in and out of prison for various crimes.

“In his mind he was going to make me somebody,” said Negron.

Fortunately for Negron, he avoided the same fate of his cousins—he was caught by Steinbrenner, in more ways than one.