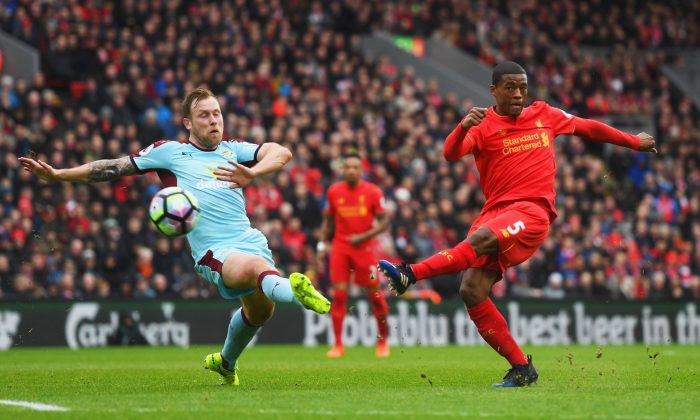 Georginio Wijnaldum of Liverpool shoots past Scott Arfield of Burnley during the English Premier League match between Liverpool and Burnley at Anfield on March 12, 2017. (Michael Regan/Getty Images)
HK Sports

Liverpool looked to strengthen their fourth position in their game against Burnley at Anfield as all other top 6 teams in the Premier League table were involved in the FA Cup quarter finals. Liverpool won 2-1 with goals from Georginio Wijnaldum and Emre Can in reply to Ashley Barnes opener for Burnley, and remained fourth having played 2 more games than their fifth and sixth placed competitors, but leading Arsenal by 5 points and Manchester United by 6. Everton beat West Bromwich Albion 3-nil to move up to 47 points, 2 points behind Manchester United in 6th place having played two games more, courtesy of goals from Kevin Mirallas, Morgan Schneiderlin and Romelu Lukaku.

In the relegation battle, Bournemouth won their first match since Christmas with a 3-2 win over West Ham at the Vitality stadium with a hat-trick from Josh King, one of two players to miss penalty kick’s for Bournemouth. West Ham’s goals came from Michail Antonio and Andre Ayew. In the other significant game for the relegation battle, Hull City defeated Swansea 2-1 at the KCom Stadium, their goals by Oumar Niasse, moved them to within a point of 17th placed Crystal Palace with Swansea’s reply coming from Alfie Mawson.

Manchester City reached the FA Cup semi-finals with a 2-nil victory over Middlesbrough at the Riverside with an early goal from David Silva, and a second from Sergio Aguerro. They were joined by Arsenal who ended non-league Lincoln City’s dream run with a 5-nil win at the Emirates Stadium, the goals coming from  Theo Walcott, Olivier Giroud, a Waterfall own goal, Alex Sanchez and Aaron Ramsey.

Tottenham Hotspur accounted for Millwall to move into the semi-finals with a 6-nil victory at White Hart Lane, with goals from Christian Eriksen, a Son Heung-min hat-trick, Dele Alli, and Vincent Janssen.

Chelsea prevailed in Monday’s last FA Cup quarter final against Manchester United, winning the game 1-nil courtesy of a 20 yard shot from Ngolo Kante early in the second half. Chelsea were the better side forcing David de Gea to make some important saves for Manchester United, with United’s only serious chance falling to Marcus Rashford after an individual run and dribble from halfway ended with a fine save with his feet from Thibault Courtois.

In the draw following the game, the two semi-finals will pit Chelsea against Tottenham Hotspurs, and Arsenal against Manchester City.