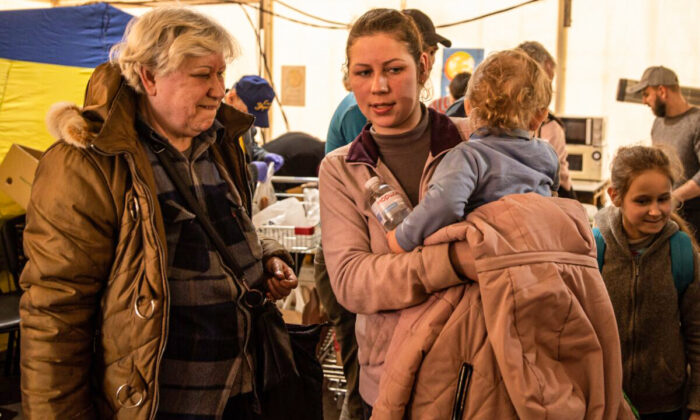 A woman carries her baby in a reception tent after arriving at an evacuation point for people fleeing the Azovstal plant, Mariupol, Melitopol and the surrounding towns under Russian control, in Zaporizhzhia, Ukraine, on May 3, 2022. (Chris McGrath/Getty Images)
Russia-Ukraine War

The latest on the Russia–Ukraine crisis, May 7. Click here for updates from May 6.

All women, children, and elderly civilians have been evacuated from the Azovstal steel mill in Mariupol, Ukraine’s deputy prime minister said on Saturday, despite what military officers said was an ongoing Russian assault at the plant.

“This part of the Mariupol humanitarian operation is over,” Deputy Prime Minister Iryna Vereshchuk wrote on the Telegram messaging app.

The Soviet-era steel mill was the last holdout in Mariupol for Ukrainian forces.

Russia held a dress rehearsal on Saturday for the military parade to commemorate Victory Day on May 9, when the country marks the defeat of Nazi Germany during World War II.

This year’s Victory Day, which falls on Monday, won’t just honor a conflict that ended 77 years ago. Many Russians will be thinking about the thousands of troops in neighboring Ukraine. Signs of support for the military have grown across the country since Feb. 24, with the letter “Z” appearing on billboards and signs in the streets and subways, and on television and social media.

On Saturday, an RS-24 Yars intercontinental ballistic missile rolled through Red Square as part of the rehearsal in Moscow, with warplanes and helicopters flying overhead, troops marching in formation, and self-propelled artillery vehicles rumbling past.

U.S. Central Intelligence Agency Director William Burns said on Saturday that Russian President Vladimir Putin believes doubling down on the military conflict in Ukraine will improve his outcome in the war.

“He’s in a frame of mind in which he doesn’t believe he can afford to lose,” said Burns, who was speaking at a Financial Times event in Washington. “I think he’s convinced right now that doubling down still will enable him to make progress.”

A Croatian citizen who fought alongside Ukrainian troops in Mariupol has been detained by the Russian army, Croatian state media reported Saturday.

Croatia’s Foreign Ministry also confirmed that it “has knowledge of a detained Croatian citizen,” and is working with the Ukrainian authorities to resolve the situation. It offered no further information due to the “sensitivity of the situation.”

The state HRT television reported that the Croatian man tried to flee Mariupol with other Ukrainian fighters but was caught by the Russians. No other details were immediately available.

The N1 regional television said the arrest was first reported by Russian media.

Ukraine’s military command said on Saturday that Russia was continuing its assault on the Azovstal steelworks in Mariupol.

“With the support of artillery and tank fire, (the enemy) is continuing storming actions,” it wrote in a regular evening Facebook briefing.

Ukraine says many civilians remain trapped at the plant alongside Ukrainian troops. Earlier on Saturday, Russia’s Interfax news agency cited Moscow-backed separatists in Ukraine’s Donetsk region as saying that 50 more people had been evacuated from the besieged steelworks.

By 1600 GMT, Reuters journalists had not seen any sign of their arrival at a reception center in separatist-controlled territory near Mariupol.

Spokeswoman Natalia Humeniuk said four rockets hit a furniture factory in a residential area, while the other two struck an already damaged runway strip. She added that information on casualties was being clarified.

Reuters was not able to immediately confirm details of the report.

Sitting in a classroom in the Romanian capital of Bucharest, U.S. first lady Jill Biden met a group of Ukrainian refugee mothers and educators on Saturday, praising the women for their strength and resilience.

Biden, who teaches English and writing at a community college in Virginia, is on a tour of Romania and Slovakia meeting U.S. servicemen deployed in the countries, and refugees.

Nearly 910,000 Ukrainians have fled to Romania since Russia launched its invasion, with charities, local authorities, and government agencies working alongside thousands of volunteers to provide food, shelter, and transportation.

While many have already journeyed further, about 80,000 remain in Romania, primarily women with young children.

Bratchuk said the strikes hit the city after targets in the surrounding Odesa region had been hit by four missiles earlier in the day.

He did not give further detail about the new strikes, saying that the facts were still being established.

Reuters was not able to immediately confirm details of the report.

Pro-Russian forces said 50 more people were evacuated on Saturday from the besieged Azovstal steelworks in Mariupol, where scores of civilians have been trapped for weeks alongside Ukrainian fighters holed up in the Soviet-era plant.

The territorial defence headquarters of the self-declared Donetsk People’s Republic (DPR) said on Telegram that a total of 176 civilians had now been evacuated from the steelworks.

Reuters could not immediately verify the report.

About 50 civilians had been moved on Friday from the sprawling, bombed-out plant to a reception center in nearby Bezimenne, in the separatist DPR, whose forces are fighting alongside Russian troops to expand their control of large parts of eastern Ukraine. Dozens of civilians were also evacuated last weekend.

Russia’s most senior lawmaker on Saturday accused Washington of coordinating military operations in Ukraine, which he said amounted to direct U.S. involvement in military action against Russia.

Washington and European members of the transatlantic NATO alliance have supplied Kyiv with heavy weapons to help it resist a Russian offensive that has resulted in the occupation of parts of eastern and southern Ukraine but failed to take Kyiv.

However, the United States and its NATO allies have repeatedly said they will not take part in fighting themselves, in order to avoid becoming parties to the conflict.

U.S. officials have said the United States has provided intelligence to Ukraine to help counter the Russian assault, but have denied that this intelligence includes precise targeting data.

A Fiji court has ruled that the $300 million yacht allegedly owned by Russian oligarch Suleiman Kerimov and seized by the United States must remain in Fiji for now.

The Fiji Court of Appeal has ruled that the luxury yacht Amadea can not be moved out of the South Pacific island nation until an appeal against the seizure is heard, defense lawyer Feizal Haniff, who is acting for the Amadea’s registered owner Millemarin Investment Ltd, confirmed in an email.

The U.S. embassy in Suva did not immediately respond to a request for comment on the latest court ruling.

A Fiji court had ruled that the United States could seize the Russian-owned superyacht, weeks after it arrived and it was seized by the local police and FBI agents on Thursday.

Authorities in various countries have seized luxury vessels and villas owned by Russian billionaires in response to sanctions imposed on Russia over its invasion of Ukraine, which the Kremlin calls a special military operation.

Biden: US Sending Another $150 Million in Assistance

President Joe Biden on Friday authorized the shipment of another $150 million in military assistance to Ukraine for artillery rounds and radar systems in its fight against Russia’s invading forces.

Biden said the latest spending means his administration has “nearly exhausted” what Congress authorized for Ukraine in March and called on lawmakers to swiftly approve a more than $33 billion spending package that will last through the end of September.

“We are sending the weapons and equipment that Congress has authorized directly to the front lines of freedom in Ukraine,” Biden said in a statement. “U.S. support, together with the contributions of our Allies and partners, has been critical in helping Ukraine win the battle of Kyiv and hinder Putin’s war aims in Ukraine.”

In a statement, the Russian Interdepartmental Humanitarian Response Center says the 50 civilians include 11 children.

Ukraine’s deputy prime minister, Iryna Vereshchuk, also said 50 civilians left the plant without giving a breakdown of how many were children.

Both Vereshchuk and the Russian body said the evacuation of civilians from Azovstal will continue Saturday.

Ukrainian fighters holed up at the sprawling complex are making their last stand to prevent Moscow’s complete takeover of the strategic port city.