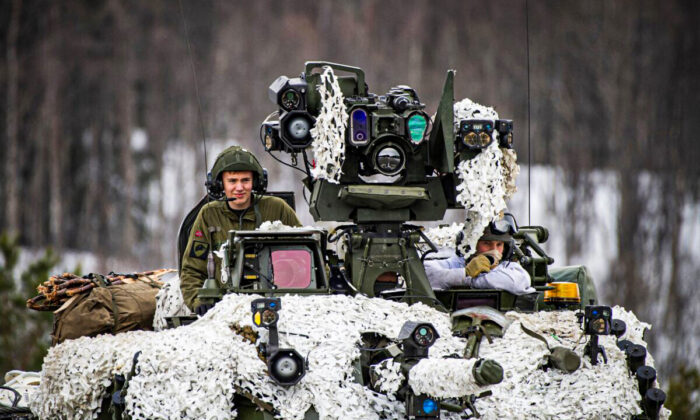 Soldiers from the Norwegian Armed Forces operate a tank as they participate in the international military exercise Cold Response 22, at Setermoen, North of in Norway, on March 22, 2022. (Jonathan Nackstrand/AFP via Getty Images)
Russia-Ukraine War

The latest on the Russia–Ukraine crisis, April 17. Click here for updates from April 16.

Russia is worried about increased activity of NATO forces in the Arctic and sees risks of “unintended incidents” occurring in the region, TASS news agency cited Russian ambassador-at-large Nikolai Korchunov as saying on Sunday.

In March, Finland and Sweden, which are both considering joining the U.S.-led military NATO alliance, conducted combined NATO military drills. The exercise was long-planned, but Russia’s invasion of Ukraine on Feb. 24 added intensity to the war game. Moscow describes its actions in Ukraine as a “special military operation.”

“The recent increase in NATO’s activity in the Arctic is a cause for concern. Another large-scale military exercise of the alliance was recently held in northern Norway. In our view, this does not contribute to the security of the region,” Korchunov said.

According to Korchunov, such activity raises the risk of “unintended incidents,” which, in addition to security risks, can also cause serious damage to the Arctic ecosystem.

He did not specify what type of incident he might be referring to.

Ukraine has completed a questionnaire that will form a starting point for the European Union to decide on membership for Kyiv, Ihor Zhovkva, deputy head of President Volodymyr Zelenskyy’s office, said.

European Commission President Ursula von der Leyen handed the questionnaire to Zelenskyy during her visit to Kyiv on April 8th, pledging a speedier start to Ukraine‘s bid to become a member of the EU following Russia‘s invasion of the country.

“Today, I can say that the document has been completed by the Ukrainian side,” Zhovkva told the Ukrainian public broadcaster Sunday evening.

The European Commission will need to issue a recommendation on Ukraine‘s compliance with the necessary membership criteria, he added.

“We expect the recommendation … to be positive, and then the ball will be on the side of the EU member states.”

Zhovkva added that Ukraine expects to acquire the status of a candidate country for EU accession in June during a scheduled meeting of the European Council meeting.

The European Council is to meet June 23-24, according to the Council’s schedule on its website.

“Next, we will need to start accession talks. And once we hold those talks, we can already talk about Ukraine’s full membership in the EU,” Zhovkva said.

Ukrainian President Volodymyr Zelenskyy said Russian troops in southern Ukraine have been carrying out torture and kidnappings, and he called on the world Sunday to respond.

“Torture chambers are built there,” Zelenskyy said in an evening address to the nation. “They abduct representatives of local governments and anyone deemed visible to local communities.”

In occupied parts of the Kherson and Zaporizhzhia regions, he said, the Russians are creating separatist states and introducing Russian currency, the ruble.

Ukraine has asked G7 nations for $50 billion in financial support and is also considering issuing 0 percent coupon bonds to help it cover a war-linked budget deficit over the next six months, the president’s economic adviser Oleh Ustenko said on Sunday.

Speaking on national television, Ustenko said these options were being actively discussed.

Ukrainian Foreign Minister: Situation in Mariupol May Be ‘Red Line’ in Talks

Ukrainian Foreign Minister Dmytro Kuleba said there had not been any recent diplomatic communications between Russia and Ukraine at the level of their foreign ministries and that the situation in the port of Mariupol, which he described as “dire,” may be a “red line” in the path of negotiations.

“Mariupol may be a red line,” he told CBS News in an interview on Sunday.

Ukrainian soldiers resisted a Russian ultimatum to lay down arms on Sunday in the pulverized port of Mariupol, which Moscow said its forces had almost completely seized in what would be its biggest prize of the nearly two-month war.

Ukrainian Prime Minister Denys Shmyhal said troops in Mariupol were still fighting despite a Russian demand to surrender by dawn.

“We didn’t really have any contacts with Russian diplomats in recent weeks at the level of foreign ministries”, Kuleba said in the interview.

At least two people were killed and four have been injured on Sunday in the shelling of the eastern Ukrainian town of Zolote, the local governor said.

“In one of the high-rise buildings, two floors were destroyed … We have at least two dead citizens, four more wounded,” said Serhiy Gaidai, the governor of the Luhansk region.

Reuters could not immediately verify his remarks

The Russian military estimated that about 2,500 Ukrainian fighters holding out at a hulking steel plant with a warren of underground passageways provided the last pocket of resistance in Mariupol.

Russia gave a deadline for their surrender, saying those who put down their weapons were “guaranteed to keep their lives,” but the Ukrainians did not submit.

“All those who will continue resistance will be destroyed,” Maj. Gen. Igor Konashenkov, the Russian Defense Ministry’s spokesman, said. He said intercepted communications indicated there were about 400 foreign mercenaries along with the Ukrainian troops at the Azovstal steel mill, a claim that couldn’t be independently verified.

Ukraine’s prime minister says Mariupol hasn’t yet fallen to Russia and the Ukrainian forces there will fight “to the end.”

Prime Minister Denys Shmyhal appealed during a Sunday appearance on an American television broadcast for help for the approximately 100,000 Ukrainians who remain trapped in the eastern city without food, water, heat, and electricity.

He says some regions of Mariupol remain under Ukrainian control, and that Russia doesn’t have full dominance over the city.

Shmyhal told ABC News’ “This Week” that Ukrainian forces are still fighting, including in the Donbas region, “but we do not have intention to surrender.”

The prime minister says Ukraine is prepared to end the war through diplomacy, if possible. Shmyhal says surrender isn’t an option, adding that “we will not leave our country, our families, our lands, so we will fight absolutely to the end, to the win, in this war.”

Russia: Mariupol Fighters ‘Will Be Destroyed’

The Russian military has warned that Ukrainian troops refusing to surrender in the besieged port of Mariupol will be destroyed.

The Russian Defense Ministry gave the Ukrainians at Mariupol’s giant Azovstal steel mill until 1 p.m. on April 17, 2022 (10:00 GMT) to surrender, saying that those who put down their weapons will be “guaranteed to keep their lives.”

Konashenkov warned that “all those who will continue resistance will be destroyed.”

Ukraine’s deputy defense minister says that the key port of Mariupol is holding despite the continuing Russian attacks.

Hanna Malyar said Sunday that the defenders of the key Sea of Azov port have tied up significant Russian forces besieging the city. She described Mariupol as a “shield defending Ukraine” that prevents the Russian troops encircling the city from advancing to other areas of the country.

Malyar said that the Russians have continued to hit Mariupol with air raids and were possibly preparing an amphibious landing to beef up their forces in the city.

The Russian military says it has struck a military plant on the outskirts of the Ukrainian capital with missiles.

He said that other Russian air raids also destroyed Ukrainian air defense radars near Sievierodonetsk in the east and several ammunition depots elsewhere.

The strikes were the latest in a series of Russian attacks on Ukraine’s weapons factories, air defense assets, and other facilities as Moscow prepares for a massive offensive in Ukraine’s eastern industrial heartland called Donbas.

A Russian general whose troops have been besieging the Ukrainian port of Mariupol was buried on Saturday in St. Petersburg after dying in battle, the governor said.

Maj. Gen. Vladimir Frolov was deputy commander of the 8th Army, which Russian media identified as being among the forces battering Mariupol for weeks.

Gov. Alexander Beglov released a statement saying Frolov “died a heroic death in battle” without saying where or when he was killed. Photographs on Russian news websites showed his grave at a St. Petersburg cemetery piled high with red and white flowers.

Ukraine has claimed that several Russian generals and dozens of other high-ranking officers have been killed during the war.

Bulgaria has banned Russian-flagged ships from entering its Black Sea ports as part of expanded EU sanctions, the country’s Maritime Administration announced on its website on Sunday.

“All vessels registered under Russian flag, as well as all vessels that have switched their Russian flag, or flag or maritime register registration to any other state whatsoever after Feb. 24, are forbidden access to Bulgarian maritime and river ports,” the authority said.

Exceptions will be made only for ships in distress or seeking humanitarian assistance, or ships transporting energy products, food and pharmaceuticals to EU countries.