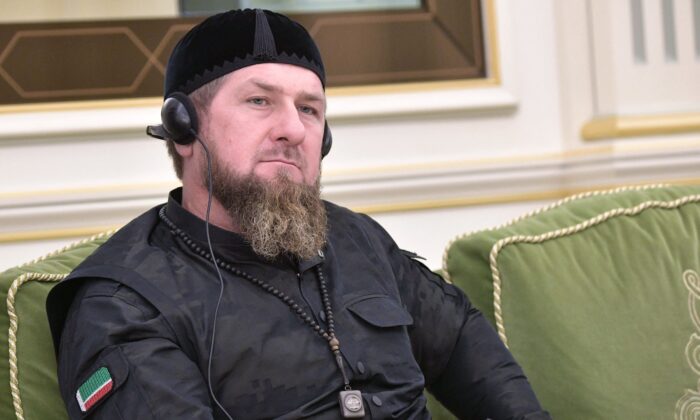 The latest on the Russia–Ukraine crisis, April 10. Click here for updates from April 9.

Ramzan Kadyrov, the powerful head of Russia‘s republic of Chechnya, said early on Monday that there will be an offensive by Russian forces not only on the besieged port of Mariupol but also on Kyiv and other Ukrainian cities.

“There will be an offensive … not only on Mariupol, but also on other places, cities, and villages,” Kadyrov said in a video posted on his Telegram channel.

“Luhansk and Donetsk—we will fully liberate in the first place … and then take Kyiv and all other cities.”

Kadyrov, who has often described himself as Russian President Vladimir Putin’s “foot soldier,” said there should be no doubt about Kyiv.

“I assure you: not one step will be taken back,” Kadyrov said.

Kadyrov has been repeatedly accused by the United States and European Union of rights abuses, which he denies.

Moscow fought two wars with separatists in Chechnya, a mainly Muslim region in southern Russia, after the 1991 break-up of the Soviet Union. But it has since poured huge sums of money into the region to rebuild it and given Kadyrov a large measure of autonomy.

The Kremlin describes its actions in Ukraine as a “special operation” to demilitarise and “denazify” its neighbor and on Sunday Russia intensified its attacks in eastern Ukraine.

Russia will take legal action if the West tries to force Moscow to default on its sovereign debt, Finance Minister Anton Siluanov told the daily Izvestia newspaper in an interview early on Monday.

“Of course we will sue, because we have taken all the necessary steps to ensure that investors receive their payments,” Siluanov was quoted as saying in the pro-Kremlin newspaper.

Ukraine’s economic output will likely contract by a staggering 45.1 percent this year as Russia’s invasion has shuttered businesses, slashed exports, and rendered economic activity impossible in large swaths of the country, the World Bank said on Sunday in a new report.

The World Bank also forecast Russia’s 2022 GDP output to fall 11.2 percent due to punishing financial sanctions imposed by the United States and its Western allies on Russia’s banks, state-owned enterprises, and other institutions.

The World Bank’s “War in the Region” economic update said the Eastern Europe region, comprising Ukraine, Belarus, and Moldova, is forecast to show a GDP contraction of 30.7 percent this year, due to shocks from the war and disruption of trade.

Growth in 2022 in the Central Europe region, comprising Bulgaria, Croatia, Hungary, Poland, and Romania, will be cut to 3.5 percent from 4.7 percent previously due to the influx of refugees, higher commodity prices, and deteriorating confidence hurting demand.

‘We Are Going to Get Ukraine the Weapons It Needs’: National Security Adviser Sullivan

The United States is committed to providing Ukraine with “the weapons it needs” to defend itself against Russia, U.S. national security adviser Jake Sullivan said on April 10, as Ukraine seeks more military aid from the West.

“We’re going to get Ukraine the weapons it needs to beat back the Russians to stop them from taking more cities and towns where they commit these crimes,” Sullivan said on ABC News.

Moscow has rejected accusations of war crimes by Ukraine and Western countries.

The Austria Press Agency reported that Nehammer told reporters in Vienna on Sunday that he plans to make the journey. It follows a trip on Saturday to Kyiv, where he met Ukrainian President Volodymyr Zelenskyy.

APA reported that Nehammer aims to encourage dialogue between Ukraine and Russia and also address “war crimes” in his meeting with Putin.

Nehammer said he was taking the trip on his own initiative, and that he had consulted with the European Union’s top officials. He said that he also informed Zelenskyy and German Chancellor Olaf Scholz.

India’s neutral stance in the war has raised concerns in Washington and earned praise from Russian Foreign Minister Sergey Lavrov, who lauded India this month for judging “the situation in its entirety, not just in a one-sided way.”

India abstained when the U.N. General Assembly voted Thursday to suspend Russia from its seat on the 47-member Human Rights Council over allegations of war crimes. India continues to purchase Russian energy despite Western pressure to avoid buying Russian oil and gas. And the United States has considered sanctions on India for its recent purchase of advanced Russian air defense systems.

Ukraine informed the International Atomic Energy Agency (IAEA) on Sunday that it had carried out the first staff rotation at the Chornobyl Nuclear Power Plant in three weeks, IAEA Director General Rafael Mariano Grossi said, adding the agency would send a mission there soon to assist in returning to normality.

Russian forces occupied the defunct power station north of Kyiv soon after invading Ukraine on Feb. 24 but Ukraine’s state nuclear energy company, Energoatom, said in early April they had left the plant and were heading towards the border with Belarus.

The IAEA on Sunday said Ukraine had provided the agency with more information about damage to the site’s analytical laboratories for radiation monitoring, saying the premises were “destroyed and the analytical instruments stolen, broken or otherwise disabled.”

An associated information and communication center was also damaged and the automated transmission of radiation monitoring data disabled, the Ukrainians reported.

Valentyn Reznichenko, governor of the central Dnipropetrovsk region, said emergency workers were combing through an infrastructure facility that was hit in the town of Zvonetsky, adding that details on casualties would be given later.

Reznichenko said on Telegram that there had also been an attack on the airport in Dnipro city.

“The airport itself was destroyed, as well as nearby infrastructure. And the rockets fly and fly,” Reznichenko said.

Reznichenko said earlier that an attack on Dnipro had wounded one person and the rockets had sparked a fire that was eventually put out. A missile had also hit a building in the Pavlograd district, he added.

Separately, the head of the Dnipro region council, Mykola Lukashuk, says five staffers of the state emergency service had been wounded by the strike on the airport.

Serhiy Haidai, governor of Luhansk, an eastern region bordering Russia, wrote earlier on Telegram that a school and a high-rise apartment building had been hit in the city of Sievierodonetsk.

Reuters could not immediately confirm the reports.

Ukrainian President Volodymyr Zelenskyy posted on Twitter Sunday that he had discussed possible additional sanctions on Russia in a call with German Chancellor Olaf Scholz.

Zelenskyy has called for an embargo on imported gas and oil from Russia, but Germany so far resisted pressure to do so.

Scholz said on Friday that Germany could end Russian oil imports this year but stopping gas imports would be tougher because the country would need to build infrastructure to import gas from alternative sources.

Russian bank VTB can no longer exercise any control over its European subsidiary in the wake of new sanctions, German regulator BaFin said on Sunday.

The European Union on Friday formally adopted new sanctions against Russia, which will ban a range of imports and also ban all transactions with four Russian banks, including VTB.

BaFin said following the sanctions, management at VTB’s Frankfurt-based subsidiary is no longer allowed to take instructions from the parent bank, and that the parent company cannot access the financial assets or economic resources of its European unit.

The measures “result in a complete ring-fencing of VTB Bank (Europe) SE from the parent company,” BaFin said.

VTB did not immediately respond to a request for comment.

The Russian military says it has struck Ukrainian air defense batteries in the country’s south and east.

Konashenkov also said that sea-launched cruise missiles destroyed the headquarters of a Ukrainian military unit near Zvonetske in the Dnipro region.

Evacuations are also planned from Berdyansk, Tokmak, and Enerhodar in the south and Sieverierodonetsk, Lysychansk, Popasna, and Rubizhne in the east.

Mariupol, a strategic port city on the Sea of Azov, has been besieged by Russian forces for nearly one-and-a-half months, cut from food, water, and power supplies, and pummeled by relentless bombardment.

Ukrainian forces dug in and Russia’s military lined up more firepower Sunday ahead of an expected showdown in eastern Ukraine that could become a decisive period in a war that has flattened cities, killed untold thousands, and isolated Moscow economically and politically.

Experts say a full-scale offensive in the east could start within days, though questions remained about the ability of Russia’s forces to conquer much ground after Ukraine’s defenders repelled their push to capture the capital, Kyiv.

Russian Human Rights Commissioner Tatiana Moskalkova confirmed on Sunday that Russia and Ukraine had carried out a prisoner exchange on Saturday.

Moskalkova said that among those returned to Russia were four employees of state atomic energy corporation Rosatom, soldiers, and some other civilians.

“Early this morning they landed on Russian soil,” Moskalkova said in an online post.

On Saturday an exchange of truck drivers between Russia and Ukraine was also conducted, Moskalkova said, with 32 Russian truck drivers, 20 Ukrainians, and a number of Belarus nationals exchanged.

Ukraine Deputy Prime Minister Iryna Vereshchuk had said on Saturday that 12 of its soldiers were being returned after a prisoner exchange with Russia, the third such swap since the start of the conflict.

Vereshchuk said that 14 civilians were also returning to Ukraine as part of the deal.

Moscow has denied targeting civilians in what it calls a “special military operation” aimed at demilitarizing its neighbor. Ukraine and its Western allies call this a baseless pretext for war.