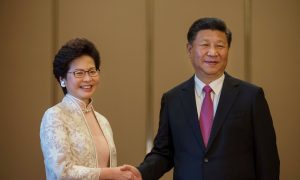 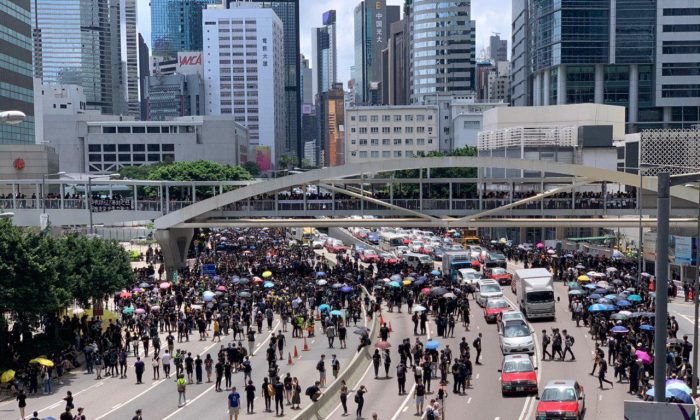 The rally will be held at the Edinburgh Place on June 26, according to the event’s Facebook page. The rally is scheduled to begin at 8 p.m. local time and end one hour later.

G20 is an international forum of cooperation attended by government representatives and central bank governors from the European Union and 19 countries, including China and the United States. It has become an annual event since 2011. This year, the forum will be held in Osaka, Japan, for two days beginning on June 28.

The Hong Kong government first proposed the controversial extradition bill in February. If passed, the legislation would allow the chief executive—the city’s top official—to sign off on extradition requests, including from mainland China, without approval from the city’s legislature.

CHRF has five demands, one of which is for the Hong Kong government to withdraw the bill completely, and the other is for Hong Kong leader Carrie Lam to resign.

“Carrie Lam has yet to respond to the five demands from civil society. Her apology was insincere. At the same time, a pro-establishment legislator is trying to revive the suspended extradition bill,” CHRF stated on Facebook.

CHRF has organized two mass protest marches in the last few weeks, one on June 9, and the other on June 16.

“Before this important event on the international stage, we should rally again to deal another blow to Carrie Lam! Hongkongers, stand firm!” CHRF stated on Facebook.

Hundreds of Hong Kong protesters opposed to a draft extradition bill entered the Immigration Tower to continue taking a vocal stand against the controversial legislation.

The protesters earlier rallied outside of Hong Kong’s Revenue Tower and at around 2 p.m. local time on June 21, the activists moved to the Immigration Tower, according to Hong Kong bureau of the Epoch Times.

The Hong Kong government first proposed controversial amendments to its extradition laws in February, which would allow the chief executive—the city’s top official—to sign off on extradition requests, including from mainland China, without approval from the city’s unicameral legislature.

Many Hongkongers, worried that if the bill were to pass, Beijing could potentially pressure the city government to hand over citizens of any nationality to face trial in the Chinese regime’s courts under false pretenses.

There have been two major protests—a march on June 9 that drew 1.03 million people and another one on June 16 that had about 2 million participants.

Hong Kong media HK01 reported that a large number of protesters at the Immigration Tower then left the site at around 3:30 p.m. local time. Some of the protesters then began to head to the Queensway Government Offices, which is home to multiple government agencies. These include a company registration office and a marriage registration office.

At around 3:45 p.m. local time, HK01 reported that about 20 protesters arrived at Queensway Government Offices.

At around 4:30 p.m. local time, Hong Kong media RTHK reported that protesters eventually had to leave Queensway Government Offices because several of its entrances were already closed. Some of the protesters were reportedly heading to the Pacific Place.

Pacific Place is a complex with office towers, hotels, and a shopping center.

Hong Kong radio broadcaster 881903.com reported that some of the protesters at Queensway Government Offices instead returned to the ongoing protest outside the police headquarters.

RTHK reported at 3:50 p.m. local time that there were thousands of protesters outside the police headquarters.

There were still thousands of protesters outside the police headquarters around 5:30 p.m. local time, according to the Hong Kong bureau of the Epoch Times.

Over a hundred protesters have gathered outside Hong Kong’s Revenue Building, which houses the government agency Inland Revenue Department, according to Hong Kong media Apple Daily. The department is responsible for tax collection.

According to the Hong Kong bureau of The Epoch Times, protesters chanted “Retract the evil bill and release the protesters” outside the department.

Protesters appears to have spilled over into the Gloucester Road Garden just next to the Revenue Building, according to Hong Kong media HK01.

The protest outside the Hong Kong police headquarters continues. As announced earlier, a police negotiator appeared to talk to the protesters.

Joshua Wong, the current secretary general of Hong Kong’s political party Demosisto, criticized the police negotiator for speaking from a level higher than the protesters, calling him “an emperor looking at his humble people,” according to the Hong Kong bureau of The Epoch Times.

Hong Kong’s pro-Beijing majority Legislative Council (LegCo) announced on its website that it had cancelled two meetings on June 21; one by the House Committee and the other by the Finance Committee, which were originally scheduled to be held at 2:30 p.m. and 4:15 p.m. local time respectively.

Additionally, public services in LegCo, including the Public Complaints Office and the library, were suspended at 2 p.m. local time.

LegCo did not provide any explanation for the cancellations.

Hundreds of protesters have moved from the Hong Kong Legislative Council (LegCo) to an area outside the Hong Kong police headquarters in Wan Chai, after a call by Joshua Wong, the iconic figure from the 2014 Umbrella Movement and the current secretary general of Hong Kong political party Demosisto, according to Hong Kong media RTHK.

The police headquarters is a 12-minute walk from LegCo.

Outside the police headquarters, Wong addressed protesters and repeating their five demands, which include calling on the Hong Kong government under leader Carrie Lam to retract its statement in which it labelled the June 12 protest a “riot.”

Several Democratic Party lawmakers were present in support of the protesters, including Lam Cheuk-ting and also Roy Kwong, according to local media reports.

Senior Police Superintendent Yolanda Yu held a press conference outside the police headquarters urging the protesters to leave. She added that police negotiators would be sent to talk to the protesters.

When asked by the media whether the police would use violence to disperse the protesters if they refused to refuse, Yu did not reply but added that the police respected the peaceful demands of Hong Kong citizens.

Jacky So, president of the Chinese University of Hong Kong student union, announced that Students’ Unions of Higher Institutions would be mobilizing more citizens to gather outside of the Hong Kong Legislative Council (LegCo) on June 21, according to Hong Kong radio station 881903.com.

So told the radio station that once there are enough protesters, the group would announce its next action. He added the announcement will be made some time this afternoon.

Protesters numbering in the hundreds, most of them dressed in black, gathered outside Hong Kong government headquarters this morning.

Students’ Unions of Higher Institutions is an alliance of student unions from several schools, including the Chinese University of Hong Kong and Hong Kong Baptist University.

Yesterday, the alliance called on the Hong Kong government to respond to its five demands by 5 p.m. local time or face more action from protesters today.

One of the demands is the withdrawal of the extradition bill and the other is the establishment of an independent committee to investigate the police’s use of excessive force against protesters on June 12.

The Hong Kong government did not respond by 5 p.m. local time on June 20, and protesters have since been seen gathering in their hundreds at Admiralty from 7 a.m. local time today.

Hong Kong media RTHK reported that some protesters had also gathered at Tamar Park, which is right next to the LegCo building, while a large number of protesters had gathered at the intersection between Harcourt Road and Tim Mei Avenue—the two main roads leading to the Hong Kong government headquarters.

Mr. Hui, a protester at Tamar Park, told RTHK that he was out to support the call by an alliance of 18 different groups to join a protest “picnic.” He said he is unhappy with how the Hong Kong government continues to deny the protesters’ demands even after its public apologies as well as the excessive force used by police to disband protesters on June 12.

Hong Kong media Apple Daily reported at 11: 25 a.m. local time that Joshua Wong, the iconic figure from the 2014 Umbrella Movement, had arrived at the Hong Kong Police Headquarters to join in the protests.

Wong called on protesters to surround both the front door and the back door of the police headquarters.

Some protesters demanded that Police Commissioner Stephen Lo come out to speak to them. Police officers have since formed a line outside the headquarters.

At around 7 a.m. local time on June 21, hundreds of protesters gathered outside Hong Kong government headquarters, according to the Hong Kong bureau of the Epoch Times.

Some of the protesters came wearing helmets and joined more protester who had been outside the government buildings since last night.

A series of different protests are scheduled for June 21 as part of an “elevated protests” campaign by Hong Kongers after their leader Carrie Lam chose not to concede to protesters’ demands, one of which is the total withdrawal of the government’s controversial extradition bill from the pro-Beijing majority legislative council.

According to Hong Kong media Apple Daily, Students’ Unions of Higher Institutions, an alliance of student unions from several schools, including the Chinese University of Hong Kong, were the ones who called on protesters to gather at the pedestrian bridge linking the Hong Kong government headquarters and Admiralty Center beginning at 7 a.m. local time.

There has also been a call by an alliance of 18 different groups, asking protesters to join “picnics” outside the Hong Kong Legislative Council (LegCo), the Office of the Chief Executive, and the Hong Kong Police Headquarters. The alliance also called for people to boycott class, work, and the markets.

There have also been calls on social media for protesters to take the metro along the Island Line of Hong Kong metro during rush hours, in a move to paralyze Hong Kong public transportation.