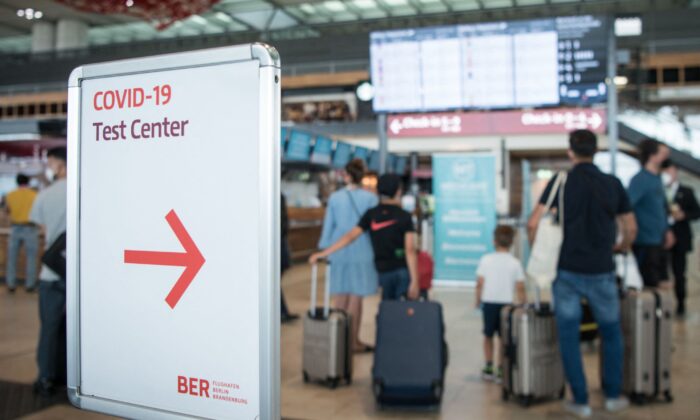 Passengers stand with suitcases in front of a display board next to a sign pointing to a test center for COVID-19 at the BER "Willy Brandt" airport in Brandenburg, near Schoenefeld and Berlin in Germany, on July 28, 2021. (Stefanie Loos/AFP via Getty Images)
Europe

BERLIN—Germany has relaxed restrictions on travel from the United Kingdom, South Africa, and seven other southern African countries that were imposed following the emergence of the new omicron COVID-19 variant.

The nine nations were removed Tuesday from Germany’s list of “virus variant areas.” Airlines and others are restricted largely to transporting German citizens and residents from countries on that list. All arrivals must self-isolate for 14 days, regardless of vaccination status.

Germany’s national disease control center had announced on Thursday that it planned to downgrade the countries’ risk status, but said at the time that “short-term changes” were possible.

They have now been added to Germany’s list of “high-risk areas,” which carries much less onerous restrictions. People arriving from such areas who either haven’t recovered recently or been fully vaccinated have to self-isolate for 10 days, which can be cut to five with a negative test.