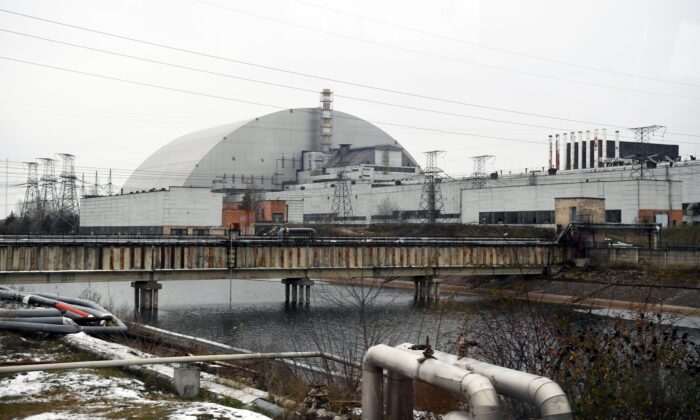 The structure of the New Safe Confinement (NSC) covering the 4th block of the Chernobyl Nuclear Power Plant, which was destroyed during the Chernobyl disaster in 1986, is pictured on Nov. 22, 2018. (Sergei Supinsky/AFP via Getty Images)
Russia-Ukraine War

The latest on the Russia–Ukraine crisis, March 20. Click here for updates from March 19.

Ukraine Refuses Russia’s Demands to Lay Down Arms in Mariupol

Ukraine said there is no question of surrendering the city of Mariupol after Russia called on Ukrainian forces on Sunday to lay down arms in the besieged port city.

“There can be no question of any surrender, laying down of arms,” the Ukrainska Pravda news portal cited Ukraine’s Deputy Prime Minister Iryna Vereshchuk as saying. “We have already informed the Russian side about this.”

Russia said a “terrible humanitarian catastrophe” was unfolding in Mariupol.

“Lay down your arms,” Colonel-General Mikhail Mizintsev, the director of the Russian National Center for Defense Management, said in a briefing distributed by the defense ministry.

“A terrible humanitarian catastrophe has developed,” Mizintsev said. “All who lay down their arms are guaranteed safe passage out of Mariupol.”

Mariupol has suffered some of the heaviest bombardment since Russia invaded Ukraine on Feb. 24. Many of its 400,000 residents remain trapped in the city with little if any food, water, and power.

Mizintsev said humanitarian corridors for civilians would be opened eastwards and westwards out of Mariupol at 10 a.m. Moscow time on Monday.

Ukraine has until 5 a.m. Moscow time to respond to the offer on humanitarian corridors and laying down arms, he said.

“Instead of spending time on eight pages on letters, just open the corridor,” she said.

Around half the single shift of staff who have been working non-stop at the radioactive waste facilities at Chernobyl since Russian forces seized the site last month have been relieved by other Ukrainian staff, the U.N. nuclear watchdog said on Sunday.

More than three weeks ago Russian forces took control of the waste facilities near the now-defunct power plant that was the site of the world’s worst nuclear accident in 1986.

The shift that happened to be working then had been on duty constantly since and unable to rotate out, which the International Atomic Energy Agency had said posed a growing threat to safety as they were exhausted and working under extreme pressure. It has often called for them to be replaced.

“They were there for far too long. I sincerely hope that remaining staff from this shift can also rotate soon,” IAEA chief Rafael Grossi was quoted as saying in an IAEA statement issued on Sunday night.

No Plan for Biden to Visit Ukraine While in Europe

“The trip will be focused on continuing to rally the world in support of the Ukrainian people and against Russian President Vladimir Putin’s invasion of Ukraine, but there are no plans to travel into Ukraine,” Psaki wrote on Twitter.

The White House announced Tuesday that Biden will travel to Brussels, Belgium, for the March 24 NATO summit. He is expected to meet with other NATO leaders and “discuss ongoing deterrence and defense efforts in response to Russia’s unprovoked and unjustified attack on Ukraine, as well as to reaffirm our ironclad commitment to our NATO allies,” Psaki said.

A senior naval commander in Russia’s Black Sea Fleet has been killed in Ukraine, the governor of Sevastopol said on Sunday.

The Russian navy did not respond to a request for comment.

Sevastopol, which is a major base of Russia’s Black Sea Fleet, is located on the Crimean peninsula, which Moscow annexed from Ukraine in 2014.

Zelensky Evokes Holocaust as He Appeals to Israel for Aid

Ukraine’s president on Sunday called on Israel to take a stronger stand against Russia, delivering an emotional appeal that compared Russia’s invasion of his country to the actions of Nazi Germany.

In a speech to Israeli lawmakers, President Volodymyr Zelensky said it was time for Israel, which has emerged as a key mediator between Ukraine and Russia, to finally take sides. He said Israel should follow its Western allies by imposing sanctions and providing arms to Ukraine.

“One can ask for a long time why we can’t accept weapons from you or why Israel didn’t impose sanctions against Russia, why you are not putting pressure on Russian business,” he said. “It is your choice, dear brothers and sisters.”

Ukraine’s Ministry of Defense on Sunday claimed that Belarus is preparing its military to invade Ukraine before warning Belarusian President Alexander Lukashenko, an ally of Russian President Vladimir Putin.

There are “signs of preparation” that Belarus will carry out the “direct invasion of the territory of Ukraine,” the Defense Ministry wrote on social media, according to a translation. It did not provide evidence for its claim, nor did it provide other details.

“The direct involvement of Belarusian troops in Russia’s armed aggression against Ukraine, against the will of ordinary soldiers and the vast majority of the Belarusian people, will be a fatal mistake for Alexander Lukashenko,” the ministry added.

Officials in Belarus have not issued a public comment in response to Ukraine’s allegations.

Russia Says It Struck Base With ‘Foreign Mercenaries’ in Ukraine

Russian officials on Sunday claimed they struck another Ukrainian base that purportedly served as a training center for special operations forces, killing more than 100. At the same time, Ukrainian authorities alleged Russian forces bombed an art school in a besieged city.

Defense Ministry spokesman Igor Konashenkov said via state-run media that “high-precision air-launched missiles” struck a base in Ovruch in the northern Zhytomyr Region, located in north-central Ukraine. Those who were killed in the airstrike were “foreign mercenaries who arrived in Ukraine” in recent days, he said, according to state-backed RIA Novosti.

Konashenkov did not provide evidence for the claim that the base was being used by foreign mercenaries or Ukrainian special operations forces. Ukrainian officials have not issued public comments on Konashenkov’s statement on Sunday.

British Prime Minister Boris Johnson has called on the Chinese regime not to “condone” Russia’s invasion of Ukraine, which he described as a fight “between good and evil.”

In an interview with The Sunday Times, Johnson said: “As time goes on, and as the number of Russian atrocities mounts up, I think it becomes steadily more difficult and politically embarrassing for people either actively or passively to condone Putin’s invasion.

He said he thinks the Chinese Communist Party (CCP) is starting to have “second thoughts” over its stance on the war.

Turkey’s foreign minister said in an interview published on Sunday that Russia and Ukraine were nearing agreement on “critical” issues and he was hopeful for a ceasefire if the two sides did not backtrack from progress achieved so far.

Russian forces invaded Ukraine on Feb. 24. President Vladimir Putin has called Russia’s actions a “special operation” meant to demilitarize Ukraine and purge it of what he sees as dangerous nationalists. Ukraine and the West say Putin launched an aggressive war of choice.

But Cavusoglu, who also traveled to Russia and Ukraine last week for talks with Lavrov and Kuleba, told Turkish daily Hurriyet that there had been “rapprochement in the positions of both sides on important subjects, critical subjects.”

“We can say we are hopeful for a ceasefire if the sides do not take a step back from the current positions,” he said, without elaborating on the issues.

Ukrainian President Volodymyr Zelensky on Sunday announced he’s ready to negotiate with Russian President Vladimir Putin, but he warned that if the talks fail, the conflict could escalate to become World War III.

It was the second time in less than a week that city officials reported a public building where residents had taken shelter coming under attack. A bomb hit a Mariupol theater with more than 1,300 believed to be inside on Wednesday, local officials said.

There was no immediate word on casualties from the reported strike on the art school. Ukrainian officials have not given an update on the search of the theater since Friday, when they said at least 130 had been rescued.

Mariupol, a strategic port on the Azov Sea, has been under bombardment for at least three weeks.

Ukraine has evacuated a total of 190,000 people from such areas since the Russian invasion began on Feb. 24, Vereshchuk said on Saturday, though Ukraine and Russia blame each other for hobbling the process.

Zelensky announced a measure that bans 11 opposition political parties, alleging they have ties to Russia, he announced in a Telegram video posted on March 20.

The Ukrainian Ministry of Justice has been told to immediately take measures to ban those political parties, he said. Zelensky didn’t provide evidence that linked the 11 opposition parties to the Russian government.

At the onset of the Feb. 24 invasion, Zelensky signed a measure that established martial law and general mobilization.

Zelensky said on March 20 that “activities by politicians aimed at discord and collaboration will not succeed,” adding that alleged links between Russia and “and some political structures, the activities of a number of political parties are suspended for the period of the martial law.”

Slovakia’s Defense Minister Jaroslav Nad says the first multinational NATO units with the Patriot air defense systems have been moving to his country.

Nad said on Sunday the transfers will continue in the coming days.

Germany and the Netherlands have agreed to send their troops armed with the Patriots to Slovakia. The troops are some of the 2,100 soldiers from several NATO members, including the United States, who will form a battlegroup on Slovak territory as the alliance boosts its defenses in its eastern flank following Russia’s invasion of Ukraine.

Nad says the Patriots will be initially deployed at the armed forces base of Sliac in central Slovakia before they will be stationed at various places to protect the largest possible Slovak territory.

He thanked Germany and the Netherlands for their “responsible decision” to fundamentally boost Slovakia’s defenses.

Another Russian general was killed during fighting last week, the Ukrainian military’s General Staff said in a statement on Saturday.

A bipartisan delegation of U.S. lawmakers visiting Poland said Saturday that the most urgent need in Ukraine’s fight against a Russian invasion is to equip and support the country in every way that will help it defend its independence.

The seven-member delegation led by Rep. Stephen Lynch (D-Mass.) has visited reception centers for refugees from Ukraine in eastern Poland. They noted Poland’s openness in accepting refugees from Ukraine, including in private homes. More than 2 million people fleeing war have come to Poland since Feb. 24, when Russia’s troops invaded Ukraine.

During an online meeting with the media Saturday, the American lawmakers stressed the need to urgently assist Ukraine’s military in their fight against Russian forces. They said there is no room for peace talks as long as there is a “hot war.”