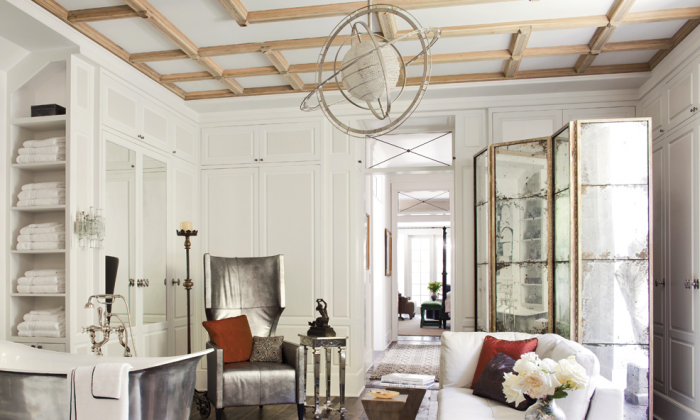 Looking out from her home, Candace Barnes can see the freighters come in and out, day after day, with furniture, goods, and potentially more waste.

“If you create something that’s classic and timeless, it’s not something that’s going to end up on the street,” says Barnes, president and creative director of interior design firm Candace Barnes, Inc. “It’s a green issue.”

Barnes, who has been involved in the arts all her life, is a licensed antique dealer and architect as well, and has her own line of custom furniture.

“All of my pieces are created and manufactured here, saving that energy, not having any exploitation,” Barnes said. “The tradition of paying for an artisan and keeping art alive—I believe I do that with my furniture line.”

Barnes believes in creating pieces that can be passed down from generation to generation.

After experiencing items arriving damaged, waiting for months, and products that don’t match the samples, having her own furniture line is more efficient, she said, and gives her control over the quality. “[My furniture] is flexible enough to be moved from room to room, recovered, modified in time.”

It started ten years ago in New York.

“John Hutton was a really good friend of mine, and I remember discussing [furniture] with him in his studio in New York—it just became fascinating,” Barnes said.

“We would study the human body with posters of anatomy,” she said, “and that would sort of be the starting point. How someone with large stature or small stature could be comfortable in a piece of furniture—not everyone thinks about that.”

Sometimes people design furniture focusing on “this line looks great, and this is edgy,” rather than creating “something that can be used practically,” Barnes said. “A piece you can hand down. That’s something that really matters to me.”

“In most of my designs, there’s always an inspiration of nature. That crosses over to us as human beings,” she said. “Often there are carved elements where I’ll add gold leaf or silver leaf. … Classic proportions, the Golden Mean, that exists all through nature.”

Whether it’s the finish on the flooring, furniture, or anything else, a sheen or sparkle gives the room an inviting feel.

“It’s about creating a texture and a surface that you want to touch,” she said. “It invites you to either sit on it or touch it in some way. It’s also an attention to detail.”

“I think that design is very inspirational,” she said. “There’s a higher level—we’re all visual, and what happens is, with the visual, we become stimulated and inspired.”

“Whether it’s the true art of painting, whether it’s design, whether it’s just nature—which of course is the ultimate inspiration—I think it’s a really, really big part in a lot of people’s life,” Barnes said.

Barnes believes in the “domino effect.”

“My design philosophy is always to take people to a higher place so they can restore themselves within, … and go out and do a better job in the world,” Barnes said.

“It’s about honoring certain unique pieces that stand on their own,” she said. “Ultimately it’s about putting it together, tailored to the client’s unique aesthetic.”

Whether the aesthetic is traditional or edgy and contemporary, it shouldn’t feel hard or cold. “[It’s] an invitation for the client to feel elevated, spiritual, at peace, and safe,” Barnes said.