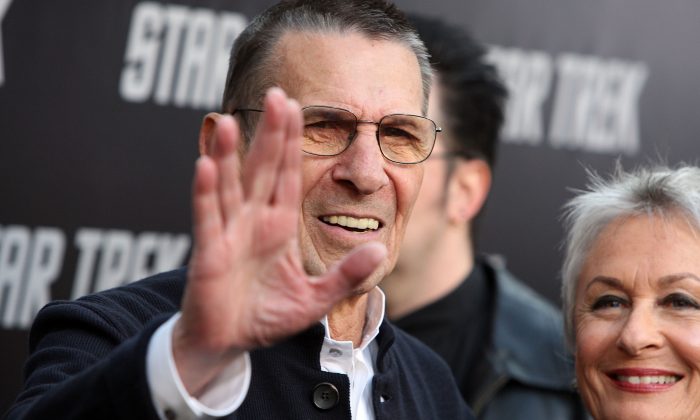 Actor Leonard Nimoy arrives on the red carpet of the Los Angeles premiere of "Star Trek" at the Grauman's Chinese Theatre on April 30, 2009 in Hollywood, California. (Photo by Frazer Harrison/Getty Images)
Entertainment

The Spock quote “Live long and proper” became quite famous, and Leonard Nimoy–who played Spock in the original Star Trek television series, took to using it and its acronym in messages to fans.

“A life is like a garden. Perfect moments can be had, but not preserved, except in memory. LLAP,” he said on February 22. He passed away on February 27.

The phrase “Live long and prosper” started out associated with the Vulcan salute, the gesture that Spock and the Vulcans used to take leave of each other.

The formal response to the gesture and/or phrase was “Peace and long life.”

In the Vulcan language, “Live long and prosper” was pronounced “Dif tor heh smusma,” according to Star Trek: The Motion Picture.

In the Klingon language, it would be said as, “nI’jaj yInlIj ‘ej bIchepjaj (nIdjahdj yInlIdj edge bitchehpdjahdj),” or “May your life be long and may you prosper,” according to the Answers website.

Although the gesture was originally used by Spock, several humans began using it as well–including Captain Jonathan Archer and Captain Jean-Luc Picard.

Nimoy created the gesture based on a blessing made by Jewish priests that he witnessed growing up while attending synagogue.