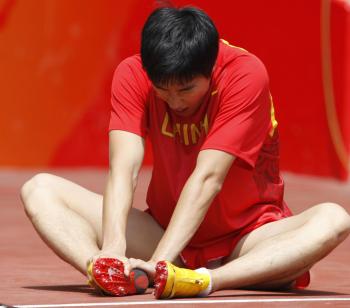 China's Liu Xiang retires from the first round of the men's 110m hurdles at the 'Bird's Nest' National Stadium during the 2008 Beijing Olympic Games. (Adrian Dennis/AFP/Getty Images)
News

The withdrawal of China’s most popular and most hyped athlete, 110 meter hurdles champion Liu Xiang, is raising many questions in the Chinese community whether or not Liu’s injury was known before race day, and whether or not his withdrawal moments before the event was a well-planned maneuver to sell tickets and focus the interest of the Chinese community on the Olympics.

Many Chinese analysts suspect that the most likely cause of Liu’s breakdown is a combination of the enormous pressure placed on him by the Chinese regime to win the gold and the enormous mental pressure of his sponsorship contracts and fame.

Last year in a press conference, Liu’s coach Sun Haiping said, “Leaders told us that, if Liu Xiang could not win the gold medal in Beijing, all of his achievements before will be meaningless.”

After winning the gold in the 2004 Athens Games, Liu’s face was plastered all over China in commercials and numerous corporate sponsorships such as Nike, Coca-Cola, Visa, Cadillac and Lenovo. In the Chinese sports circle, Liu’s fame can only be contested by NBA star Yao Ming.

In an interview with the UK’s Telegraph, Liu’s former coach Gu Baogang revealed that Liu had been injured during training as late as July.

"He never had any injuries before he hurt his foot in June," Gu said. "But that injury was not too bad. After the Bird's Nest was finished, he trained in the stadium in July and hurt his foot again."

Gu also commented on the pressure Liu was facing. “Liu Xiang has no freedom in China…He is respected and loved, but he leads a really boring life and cannot go out much,” Gu said.

“He feels more relaxed when he races outside China. It would be better if he was in an environment that is more like a foreign country, with less attention.

"He is the only competitive athlete in China's track and field team so he has been under constant pressure, including from the high hopes of government officials."

According to a Chinese internet forum, a poster under the alias “NIKEinsider” states that injuries weren’t the only thing burdening Liu. The insider gave a detailed account of how Liu Xiang had been preoccupied with sponsorship activities and advertising opportunities one after another, and thus had little time for intensive training.

It continued to say that this led to Liu’s physical condition no longer meeting high-level competitive standards, and that plans were made to have Liu quit the race to save both his own face, and that of his sponsors.

According to reports, Liu Xiang was not at the Opening Ceremony so he could save his strength and energy. Chinese media reported that he did not join the Olympic Village until Aug. 16, and it wasn’t until Aug. 17 that Liu began to appear inside the National Stadium.

This news led several other Chinese internet posters to raise questions about possible behind-the-scenes control of the situation by the Chinese Communist Party. “Liu Xiang has the ability to attend the competition. If he has to quit, it should have been announced beforehand. They should not wait until the competition had started. This is not Liu Xiang’s fault. He indeed has injuries. But everything can be announced earlier,” said one poster.

“Why was there no announcement and instead, there was so much promotional effort to hype it up? Did they do this to sell more tickets?” they asked.

China’s 90,000 seat National Stadium, also known as the “Bird’s Nest,” was running at over 90 percent capacity for the 110 meter hurdles preliminary heat. When Liu Xiang had to withdraw from the race, more than 60 percent of that audience left immediately, showing obvious signs of disappointment and tears.

Sponsors certainly had a lot invested in Liu Xiang’s performance. Ding Bangqing, deputy Chairman of the Board for the Guangdong Advertising Company told Dongnan Newsflash newspaper, “Liu Xiang’s withdrawal will definitely negatively impact the profit and operation of the sponsor companies. Since the pricing of Liu Xiang’s advertisement is at least 10 million yuan, and considering that many companies use Liu in the advertisement, I personally think the loss of Liu this time will be over 100 million yuan, while for those sponsors, the losses will be over 3 billion yuan.”

As of August 18, there have been reports that both a Lenovo ad featuring Liu and a Visa ad referring to Liu’s world record which he won in Switzerland 2006 that says “Refresh the Dream, 12.88 seconds,” have been cancelled.