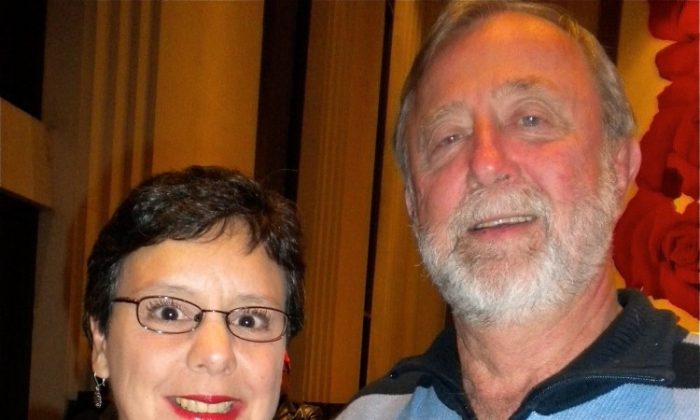 “Brilliant, inspiring and glorious has been the overwhelming response to Shen Yun Performing Arts’ shows,” wrote Mayor Stodola. “It’s traditional Chinese culture as it was meant to be: a study in grace, fluidity, balance, inner strength and positive values.”

Later, on the steps of Robinson Music Hall after Shen Yun’s Feb. 28 performance, the mayor extolled Shen Yun’s splendor and precision. “There’s some real discipline up on that stage,” he said.

New York-based Shen Yun travels around the world with one mission: to revive 5,000 years of divinely-inspired Chinese culture, one that the communist regime has nearly decimated, according to the company’s website. Traditional Chinese culture is replete with universal values such as benevolence, honor, and sincerity, and was influenced by China’s three religions of Confucianism, Buddhism, and Taoism.

“The quality of this presentation is as good as you would see anywhere in the United States or Europe— or anywhere [else],” said Dick Wellner, a retired businessman, who was in the audience. He and his wife, Sarah Wellner, are “transplants from Chicago so we really love the caliber of this show,” said Mrs. Wellner on Feb. 27. “It’s beautiful.”

Mr. and Mrs. Wellner are regular arts patrons. “We come here for the symphony and other things. We see all the artists that could possibly come here. We enjoy it,” said Mr. Wellner. It was a family connection that drew him into classical performing arts, he said. “Our daughter in law is the second principal chair cellist with the Elmhurst Symphony Orchestra so we’ve been involved for over 20 years.”

Mrs. Wellner praised the dancers. “They are obviously very strong and flexible and what they can express with their movements is remarkable, and the music too,” she said. Mayor Stodola wrote that the unique feature of the company’s “classical Chinese dance is its lending of emphasis not only to the beauty of the movement, but also the expression of substance.”

Classical Chinese dance, an ancient art form going back to the beginning of the civilization, is one of the mots comprehensive dance systems in the world, explains Shen Yun’s website. “Classical Chinese dance is rich with expressive power,” it states. “Through expression of bearing and form, beautiful dance movements bring out the inner meaning of intrinsic thoughts and feelings, reflecting the peculiarities of human nature, the standard for human conduct, moral concepts, mental state, one’s value system, and so on.”

Deborah Love comes every year to see Shen Yun. “I always enjoy it,” she said. This year she brought her little granddaughter. “This is her first year; I just had a feeling for her to come. It’s touching, it’s beautiful.”

She credited her husband, Wayne Love, with starting the family tradition of seeing Shen Yun. He said, “It will keep you coming back each year.”

Mrs. Love said: “There was one scene that really touched me. The Flower Fairies, I really enjoyed that.” According to the program, “Flower blossoms transform into fluttering fairies to join in ethereal dance … Airy and almost weightless, they evoke a divine grandeur.”