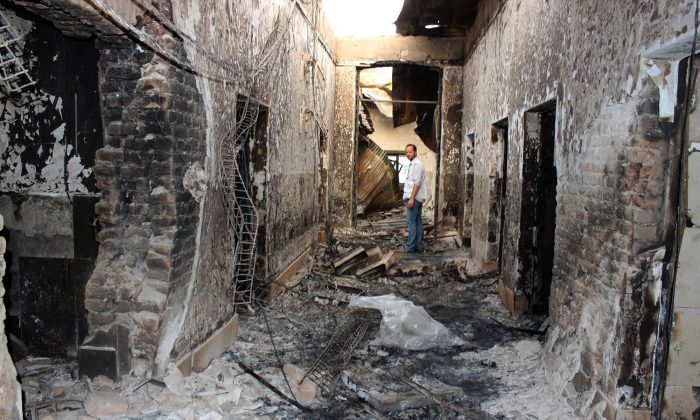 FILE - In this Oct. 16, 2015, file photo, an employee of Doctors Without Borders stands inside the charred remains of their hospital after it was hit by a U.S. airstrike in Kunduz, Afghanistan. Russian airstrikes have reportedly hit at least a half dozen medical facilities in Syria, according to activists. In Yemen, an airstrike by the Saudi-led coalition hit a hospital run by Doctors Without Borders. Still, apart from rights groups’ condemnations, there’s been little international outcry, in contrast to a U.S. strike on a hospital in Afghanistan that killed 30 people. (Najim Rahim via AP, File)
Middle East

BEIRUT—The first missile slammed into the field hospital in the rebel-held Syrian town of Sarmeen, killing a physiotherapist inside. Five minutes later, the aircraft returned, firing another missile that hit nearby just as the first responders were arriving. A total of 13 were killed, and the hospital organizers blamed Russian warplanes.

In Yemen, airstrikes by a Saudi-led coalition targeting rebels destroyed a hospital run by the international medical charity Doctors Without Borders this week. Although there were no deaths, the hospital was the latest casualty of a campaign that has claimed the lives of nearly 3,000 people since March.

But those strikes on hospitals brought little international outcry — a sharp contrast to an Oct. 3 American strike on a hospital in Afghanistan that killed 30 people and brought a firestorm of criticism on Washington.

The reasons are many, perhaps chief among them is general fatigue over the conflicts in Syria, now in its fifth year, and in Yemen, a relatively impoverished and isolated country mired in turmoil for more than a decade. Also, while the U.S. acknowledged relatively quickly that it carried out the strikes and President Barack Obama apologized to Doctors Without Borders, which also ran that facility, Russia and Saudi Arabia categorically deny that their campaigns hit civilians, and conditions on the ground make confirmations more difficult, muddying the waters for critics. Russia denied it hit the Sarmeen hospital, which was struck Oct. 20.

“After more than four years of war, I remain flabbergasted at how international humanitarian law can be so easily flouted by all parties to this conflict,” said Sylvain Groulx, head of Doctors Without Borders’ mission for Syria. “We can only wonder whether this concept is dead.”

The Syrian conflict has killed a quarter of a million people, producing a seemingly endless churn of death and devastation to viewers around the world. Hundreds of medical facilities have been destroyed throughout the war and 670 medical personnel have died since the start of the conflict in March 2011, according to Physicians for Human Rights.

The war in Yemen has generated little attention. There, Saudi Arabia and its allies have been waging an air campaign since March to back the president, ousted by Shiite rebels who have taken over large parts of the country. Civilian areas have borne a large part of the violence, and the U.N. said the Doctors Without Borders hospital hit Monday was the 39th health center struck in the air campaign.

Few governments around the world are eager to vocally criticize oil powerhouse Saudi Arabia, since many benefit from its aid or investment. Saudi Arabia has also been able to win support for its campaign — even from the U.S. — by presenting it as aimed at pushing back the influence of Iran, which backs the rebels. For example, in Egypt, which is officially a partner in the Saudi coalition, little coverage of the Yemen war appears on TV stations and what does appear is uncritical.

“The media silence, coupled with a general lack of knowledge of Yemen and a growing anti-Shiite sentiment in the country, fuels the apathy toward the war,” said Egyptian analyst and sociologist Ziad A. Akl.

The relative silence over the civilian death toll in Yemen is in contrast, some say, to the outcry over Israel’s successive wars with the Palestinians in Gaza.

Israel was criticized over the heavy civilian death toll during last year’s war, when over 2,200 Palestinians were killed, including more than 1,400 civilians, according to the United Nations. Israel has said the civilian death toll was lower and blamed Hamas for civilian deaths, saying the group used schools, hospitals, mosques and residential areas as cover to stage attacks. The government often complains it is held to a double standard and comes under greater scrutiny than other nations.

Hirsh Goodman, an independent researcher on Israel’s strategic affairs, said the outcry against Israeli operations was a result of several factors, among them the world’s dislike of its nearly 50-year occupation of land Palestinians want for a future state and the increase of Muslims in Europe who are being more vocal against Israel.

He said that because of its military’s technological prowess, Israel is largely viewed as a Goliath and the Palestinians as a “beaten, battered, conquered people,” a narrative that has drawn many to support the Palestinians. He said that conflagrations in Yemen or Syria draw less attention because they are complicated and difficult to understand.

Bahrain political analyst Ali Fakhro said the similar abuses happen in Syria, Yemen or Gaza but public opinion in the Arab world is more “sensitive” about U.S. actions “because the U.S. committed many mistakes in the Arab region that can’t be forgotten easily, especially since it has a strong ties with Israel.”

And when it comes to Yemen, “no one is brave enough to criticize Saudi Arabia” and thus appear to be supporting Iran, he said.

Doctors Without Borders said there has been a significant increase on strikes on hospitals in northern Syria since late September — when the Russian campaign began — killing 35 Syrian patients and medical staff and wounding 73. In a statement Thursday, it said airstrikes have targeted twelve hospitals in Idlib, Aleppo, and Hama governorates throughout October, including six hospitals it supports.

Russian officials have categorically denied hitting hospitals or any civilian targets in Syria. The Syrian American Medical Society, which runs the hospital in Sarmeen, said it was Russian strikes that hit in and around the facility, as did activists on the ground. Many Syrians say they can distinguish Russian airstrikes from those by the Syrian military because they show signs of being more technologically advanced, with larger explosions and planes flying much higher in the sky.

Raghda Ghanoum, a 23-year-old Syrian in a volunteer first responders group, was among the first to arrive to Sarmeen from nearby Saraqeb after it was hit. “There were dead people on the ground,” she told The Associated Press on Wednesday, saying that as she spoke Russian warplanes were circling above.

“The Russians think every medical center is treating terrorists,” she added.

Zaidoun Al-Zoabi, head of the Union of Syrian Medical Relief Organizations, which provides help to hospitals in opposition-held areas, said people around the world have long stopped caring about Syria, and Syrians have lost all hope that someone can help them.

“I think people have reached the epitome of despair,” he said.