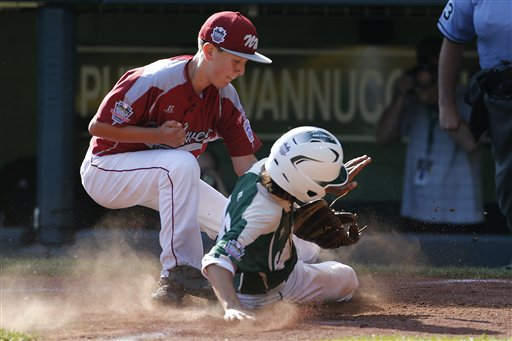 Pearland's Clayton Broeder (18) scores on a wild pitch by Lynnwood pitcher Tyler Durbin who covers home on the play during the sixth inning of an elimination baseball game against Lynnwood at the Little League World Series tournament in South Williamsport, Pa., Monday, Aug. 18, 2014. Pearland won 11-4. (AP Photo/Gene J. Puskar)
US

The 2014 Little League World Series is getting closer to the end with a number of teams already knocked out of competition.

South Moravia from the Czech Republic, Perth Metro North of Australia, Lynnwood Pacific of Washington state, Miguel Luzunaris of Puerto Rico, and Cumberland American of Cumberland, Rhode Island were knocked out after losing on Monday.

Coquivacoa of Venezuela, Pearland East of Texas, Guadalupe Linda Vista of Mexico, Canyon Lake of South Dakota, and Jackie Robinson West of Chicago, Illinois all advanced with wins on Monday.

Wednesday will also see Mountain Ridge of Nevada play Taney Youth Baseball Association of Pennsylvania in the United States. That winner will go on to the championship, while the loser will face the winner of the other game in the bracket–Pearland East of Texas vs Jackie Robinson West of Illinois.

The winners of the U.S. bracket and the international bracket will play each other on August 24.

See a full schedule below, not including the crossover games.

Coquivacoa of Venezuela vs Guadalupe Linda Vista of Mexico

Pearland East of Texas vs TBD

Tokyo Kitasuna of Japan vs Seoul LL of South Korea