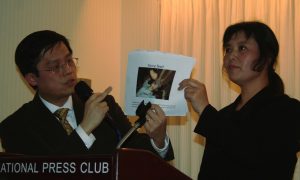 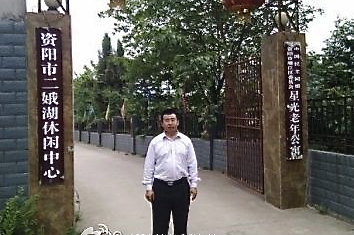 Jiang Tianyong, a human rights lawyer in China, stands outside the Erehu Legal Education Center, also known as a brainwashing center, on May 13. He was part of a group that visited the facility. (Courtesy of Jiang Tianyong)
China

While the Chinese regime has been making promises recently about abolishing its notorious system of forced labor camps, another, parallel apparatus, more extensive, less regulated, and equally violent, has mostly escaped notice.

In a recent article, the Dui Hua Foundation, a rights group, described the Communist Party’s “Legal Education Classes” (LEC) as a way to illegally detain and abuse petitioners and Falun Gong practitioners. But unlike the forced labor system which, though brutal, operates under a set of rules and regulations, these facilities “appear to be based on a patchwork of local measures enacted in response to political directives,” Duihua says.

By piecing together numerous accounts from victims, Party directives, official notices, and unguarded remarks made by Chinese officials to the press, the picture that emerges of LECs bears a disturbing resemblance to the labor camp system, with its reliance on physical and mental abuse, but without any legal framework.

“It’s a crime, completely illegally imprisoning people,” said Teng Biao, a well-known Chinese rights lawyer, on his Twitter account. He had recently been attacked by regime-hired thugs after attempting to investigate one of the facilities in Sichuan.

In a widely publicized case, Zheng Linxin, the 7-year-old daughter of a long-term petitioner, was kept in an LEC with her mother for 65 days in 2006. She later shared her story with Radio Taiwan International and other media. She saw her mother brutally beaten and dragged around, fed only the guards’ leftovers, and was locked up with a shackled murder convict. The child also witnessed guards beating up a handicapped woman and an elderly lady.

Petitioners have given accounts of LECs all over China, but the system appears to have originated for use on the China’s Falun Gong practitioners, who numbered approximate 70 million in the late 1990s, according to official reports. There is no available documentation of the existence of LECs before late 1999, when then-Party head Jiang Zemin initiated his sweeping persecution of the popular meditation practice, which resorted to a battery of extralegal persecutory techniques.

While no known official record explains the origin of the facilities, some believe the LEC is a reincarnation of the Maoist-style study sessions used in the 1950s and 1960s across China, where the masses were made to read Mao’s “red bible” in groups, and told to fiercely criticize themselves and each other. This brainwashing ritual went dormant when the Cultural Revolution ended in the 70’s, but was brought back to life, with some modifications and aimed at only a subset of the population, when Jiang Zemin began the campaign against Falun Gong in July of 1999.

The ensuing nationwide persecution brought tens of thousands to Beijing to petition, most of whom were sent to jails, labor camps, and other detention centers. According to existing documentation, the first known LEC was opened in a police detention facility in Wuhan City on Sept. 13, 1999, to detain adherents who tried to petition.

The rest of the country quickly followed suit, with 23 provinces starting their own LECs: they were established at the provincial, county, township, and even at the level of the neighborhood committee, the CCP’s lowest-reaching body.

In media reports, LECs are said to be built by local governments, labor camps, schools, or other government units; but often the actual agency that oversees LECs is the 610 Office, a high-level Party taskforce that operates outside the legal system. The World Organization to Investigate the Persecution of Falun Gong, a research group, cites multiple Chinese media reports were 610 Office leaders conduct inspections and appraisals of LECs. The Beijing 610 Office established its own “Legal Training Center” in the capital in 2001. The agency was founded on June 10, 1999, immediately after Jiang announced the establishment of the “Falun Gong Issue Leadership Team” on June 7 at a central Politburo meeting.

In most regions, the density of LECs far exceeds that of prisons and labor camps combined. For example, in Weicheng District–the smallest of Weifang City’s four administrative districts in the coastal Shandong Province–there were seven LECs in 2004 for the 105-square-mile region with its population of 415,000, while there are only two prisons for the whole of Weifang City, according to information collated by Minghui, a website that carries firsthand reports about the persecution of Falun Gong in China.

In addition, many cities spent large amounts on building new LEC facilities, each easily costing several million yuan. Many examples are referred to in Chinese media reports, such as a 2.6 million yuan investment in a “Transformation Base” in Wuhan City’s Wuchang District that received compliments from 610 Office leaders in 2001. “Transformation” refers to the process of forcing, often with the aid of physical and other forms of torture, Falun Gong adherents to renounce their beliefs and pledge allegiance to the Communist Party.

LECs also demand that detainees pay high boarding and tuition fees. Victims reported being charged over 5,000 yuan per month in 2001, roughly equivalent at the time to an average urban worker’s income over six months. Families are extorted when the individuals lack funds.

In the early years of the persecution, state-owned enterprises and government departments were ordered to send their employees who practiced Falun Gong to LECs, some having to pay all or a portion of the cost, according to accounts on Minghui.org.

All the money is used to hire the many “help-and-teach” staff that “educate” the detainees. Staff members sometimes exceed the number of detainees. In a district-level LEC in Changsha City, for example, over 20 people were hired from May to June, 2001, to “transform” 9 Falun Gong practitioners, according to an official notice.

Staff members include administrative staff or wardens from prisons and labor camps, many of whom are experienced in persecuting Falun Gong; security guards or armed police in some locations; and former Falun Gong practitioners who were broken by torture and agreed to help brainwash other adherents.

Although there are no official regulations about who should participate in LECs, Party propaganda usually refers to detainees as “practitioners who refuse to be transformed.”

Judging from “success stories” in Party media, the standards for a successful transformation include written repentance statements and denouncement of Falun Gong, insulting the Falun Gong founder using language consistent with state propaganda, a guarantee to give up the practice, expressing gratitude to the Party that “saved their lives,” and actively helping authorities transform other Falun Gong practitioners.

Though they’re called Legal Education Centers, what goes on inside them is far from legal, and not the least educational. The goal of holding individuals in the centers is to force them to renounce their spiritual beliefs; methods contrived to achieve this end include extreme physical torture, sleep deprivation, and the forced watching of materials that slander Falun Gong.

Many deaths have been documented on Minghui.org. A recent case was that of 65-year-old Jiang Meilan, who died in 2012 after 23 days’ detention in a LEC in Changsha City, Hunan Province. When her son picked her up, Jiang was incoherent, and her body bruised all over from being beaten with electric batons. Her mouth was festering, her internal organs were shutting down, and the lower half of her body was bleeding. She passed away in hospital shortly after her release.

Deaths like Jiang’s are not rare at LECs. Chinese human rights activist and lawyer Teng Biao referred to LECs as “torture camps” in a recent blog, and quoted other lawyers as saying that “such illegal detention facilities have killed more people than prisons and labor camps.”

While Falun Gong practitioners have traditionally been the key target for LECs, around June 2006 central authorities encouraged local governments to use LECs on regular petitioners, according to multiple news reports. The Party’s State Council issued an official document in March 2007 requiring local governments to “leverage education” and “solve problems locally.”

Since then LECs have become a more flexible alternative to labor camps in dealing with petitioners. LECs can be set up anytime, anywhere, and for any number of people, according to a Jiangsu Province official, speaking to state mouthpiece Xinhua. The official said that employers of the petitioners were required to pay a fee of over 40 yuan per day per attendee. The decision is made by a group of local officials without going through any legal process, and petitioners are typically tricked into it, if not kidnapped by force.

The “education” of petitioners is also reported to be typically abusive. Radio Free Asia reported the death of a petitioner after 9 months’ detention in an LEC in Shannxi Province. Xu Lingjun, a Sino-Vietnam war veteran in his forties, died of starvation, according to his fellow detainees. “They gave us two meals a day, with only 3.5 ounces of rice or less each meal,” said the witness. When notified of his death, Xu’s family was given a corpse they could hardly recognize: the formerly 180-pound man weighed only around 80 pounds.

Another petitioner told Southern Metropolis Daily that when he was held in a Hubei Province LEC, the detainees were never given any kind of classes or education materials, and were merely forced to sign guarantees to stop petitioning. They were not allowed to talk to each other, and were monitored all day, even in restrooms, he said. The report also told the story of a 48-year-old petitioner detained for 63 days in a LEC, where she was beaten more than once by a young ruffian hired by the LEC, and was seriously injured from the beating. The LEC left her unattended, and only gave a small amount of medication after she protested with a two-day hunger strike, the petitioner told the Daily.

The violence has extended to those who dare show interest in what happens behind closed gates. On May 13, 11 lawyers were set upon and detained after attempting to photograph an LEC in Ziyang City, Sichuan Province. That particular facility, according to Minghui.org, has tortured at least 500 Falun Gong adherents, including three who died.