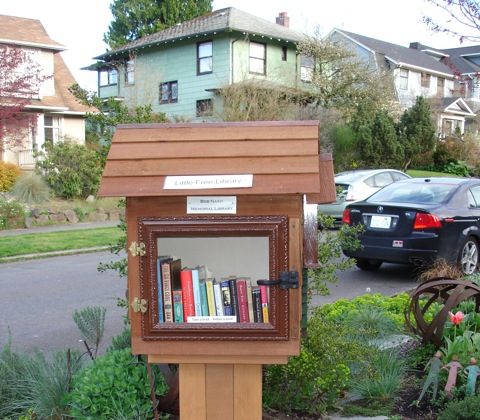 Little Free Library is now spreading from lawn to lawn around the globe. (Michelle Nash)
US

The concept is simple: take a book, return a book. And with that, what began as a single Little Free Library in Hudson, Wis., is now spreading from lawn to lawn around the globe.

After co-founder Todd Bol’s mother passed away, in honor of her love for books he built a miniature library and placed it outside his home. The books were for anyone to take, and the idea took off.

With the help of co-founder Rick Brooks, that single library has grown to include little libraries in nearly every state in the United States and in a handful of countries around the world.

The librarians, or stewards, can register for free and find instructions for building their own library to place outside their home at littlefreelibrary.org. The small rooftop boxes are then filled with books and displayed, similar to a mailbox, for easy access to anyone.

The more accessible the library, the more it promotes community inclusiveness.

Bol sees the little libraries as an important medium in helping people reconnect with their neighborhoods, a relationship many have grown away from.

“What’s happened to us is we have a primal need to be with our community. Now we have so many things that pull us apart, but the little libraries brings us together,” he says. “It represents the community and a natural extension of ourselves.”

As for vandalism, though there have been some incidents, Bol says the cases are very few simply because the community feels like the libraries are theirs to cherish. “People feel it’s a part of their neighborhood, so they feel more respectful since it’s coming from the community.”

Seattle resident Michelle Nash mounted her library on April 17 of this year.

“It’s like a little magical thing, out of the ordinary for people,” she says. “Everyone’s on iPhones and computers, yet this little wooden box creates dialogue between people.”

“It’s not just about the books—it’s the neighborhood, the sharing. It’s a continuation of my husband and I sharing books,” she says. “It’s most rewarding to see people stop by—leaving books, getting books—but also leaving a touching note or sometimes pictures.”

Nash says it was a challenge for her build the library. She used recycled materials, and she even weather-stripped it for the rainy Seattle climate.

According to her, however, it was well worth the test. “It just says something about people wanting to share anonymously to be enjoyed by all populations.”

Many different forms of community have gotten involved with the libraries. In Wisconsin, Bol says a program called “Good Mates” allows prison inmates to construct libraries that will be posted in communities throughout Wisconsin.

The little libraries also remind us of the fundamental importance the world places on reading and literacy. Libraries have spread to African countries like Ghana and the Republic of Congo. Several have spread throughout Europe.

“We show how important reading is,” Bol says. “Libraries big or small, we support them all.”

As for moving away from the new methods of electronic reading, Bol says he instead sees the little libraries as a blending of modern technology, something not possible without the evolution of Internet social media forums like Facebook and Twitter. “I think, in a funny way, it’s a natural step in social media.

Wherever the trend moves, Bol is just happy to witness and support positive action within society.

“What’s so nice about Little Free Library is it gives an interface where we can all talk to each other and get over our fear of each other,” he says. “It’s delightful to see people excited. How fortunate I am to be able to touch the finer side of humanity.”