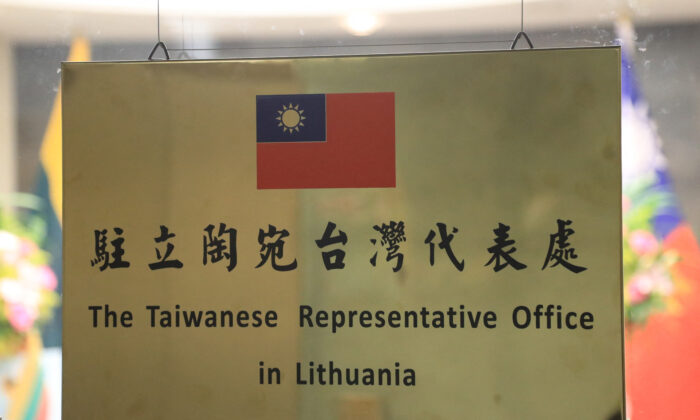 Taipei announced it had formally opened a de facto embassy in Lithuania using the name Taiwan, a significant diplomatic departure that defied a pressure campaign by Beijing, on Nov. 18 ,2021. (Petras Malukas/AFP via Getty Images)
Europe-China Relations

The latest figure shows Lithuania’s exports hit a ten-year high in 2021. The data came as the Chinese regime imposed trade restrictions on the country over its friendly stance towards Taiwan.

“Their operating results were among the best in a decade. … Lithuanian exporters have adapted to the challenging geopolitical and economic environment,” said Jonė Kalendienė, head of Enterprise Lithuania’s Research and Analysis Division, in a press release.

She added that exports of Lithuanian-origin goods had the greatest impact on the overall growth of goods, with the annual growth rate of manufactured goods exports at 25.9 percent and processed goods re-exports at 12.7 percent. These two figures do not include petroleum products.

Lithuania allowed the Taiwan Representative Office, the de facto embassy of “Taiwan” instead of using the city name of “Taipei,” to open in Vilnius in November 2021, which means Lithuania recognizes in practice Taiwan as a self-ruled state other than a territory of China.

This move caused strong discontent of the Chinese communist regime and it downgraded the diplomatic relationship with Lithuania and curbed Lithuanian exports. Subsequently, a number of Lithuanian companies with ties to China found that they were facing various trade restrictions, Lithuanian officials called China’s actions tantamount to “undeclared sanctions.”

Tada Povilauskas, the chief economist at Skandinaviska Enskilda Banken, Lithuania’s largest bank, said that despite China’s trade retaliation over the Taiwan issue, Lithuania’s economic growth has not been affected at all, because Lithuania’s exports to China account for only 1 percent of total exports. According to EurActiv, a news media focus on the EU, in January.

According to LRT, In 2021, Lithuania’s main exporting countries are Germany, the United States, Poland, Latvia, and the Netherlands, accounting for 40 percent of total exports. Its main markets for processing and re-export are Russia, Latvia, Poland, Estonia, and Belarus, accounting for about 60 percent of total exports. And Lithuania plans to open its own trade office in Taiwan in the first months of 2022.

Tensions in eastern Lithuania did not have a significant impact on Lithuania’s export performance either as the share of Belarus, Russia, Kazakhstan, and China in Lithuania’s exports of origin is very trivial, with the first three countries accounting for 2.5 percent of exports and China for 0.8 percent.

Meanwhile, exports of Lithuanian-made goods to China fell by 30 percent, with the largest drop (excluding agricultural products) of 36.1 percent in the fourth quarter of last year, LRT said.

On Feb. 9, China’s General Administration of Customs notified Lithuania that Lithuania’s beef, dairy products, and beer are not permitted to be imported into China.

Prime Minister Ingrida Šimonytė responded on Feb. 11 that the decision to suspend imports of certain products from Lithuania would not cause any problems and that Lithuanian companies had stopped exporting to China several months ago and had found new markets.

China is the world’s largest importer of beef, but data by Chinese customs shows in 2021 China imported 2.36 million tons of beef and only 775 tons from Lithuania.

According to the European Commission, Lithuania’s exports to China in December 2021 fell by 91 percent compared to the same period in 2020.

To resist China’s diplomatic pressure, Taiwan announced in January to set up a $200 million fund to invest in Lithuanian industry and promote bilateral trade, Lithuania also plans to open its own trade office in Taiwan in the first months of 2022, Reuters reported on Jan. 11.

In May 2021, Lithuania withdrew from China’s “17+1” group and call on other EU countries to drop out of the group. “17+1” is China’s initiative to engage Central and Eastern European countries, most of which are from the ex-Soviet bloc, according to POLITICO on May 21, 2021.