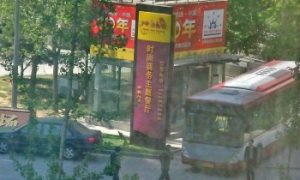 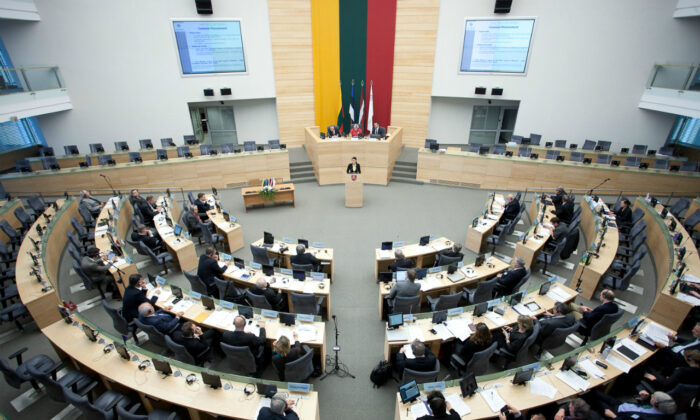 Lithuanian Parliament (Seimas) Hall. Members of the Parliament participate in the 31st Session of the Baltic Assembly in Vilnius, the capital of Lithuania on Nov. 9, 2012. (Saeima [CC BY-SA 2.0] https://creativecommons.org/licenses/by-sa/2.0)
China Human Rights

A group of 29 members of parliament (MPs) from the unicameral Lithuanian Parliament and one Lithuanian Member of the European Parliament (EPP—European People’s Party) sent a letter to Chinese leader Xi Jinping condemning and expressing their concerns over the religious persecution currently taking place in China, and called on Xi to end it.

In the Dec. 10 letter published on Facebook, author MP Mantas Adomėnas and the signatories expressed their concern about “the violent ‘sinicization’ of religions conducted by the Chinese Communist Party,” stating that “placing Communist ideology and obedience to the Communist state above the imperatives of faith and conscience” is a violation of “freedom of religion and conscience, one of the fundamental human rights.”

They expressed their outrage over the horrible persecution of Uyghur Muslims, the incarceration “more than one million Uyghurs in prison camps,” and putting them under “total surveillance.”

The signatories also protested against the oppression of Tibetans and the deliberate efforts of the Chinese Communist Party to “obliterate [their] traditional faith, way of life, and national identity.”

The lawmakers who signed the letter also condemned “the persecution, incarceration, torture and barbarous killing for the sake of organ harvesting of the adherents of Falun Gong.”

They condemned the persecution, incarceration, and prohibition of other religious practices, including the Catholic Church, the Church of Almighty God, and even practices privately performed.

Falun Gong is a traditional spiritual practice that consists of gentle meditative exercises and a moral philosophy centered on the tenets of truthfulness, compassion, and tolerance. The practice became widely popular in China and abroad during the 1990s and by 1999, according to official accounts, there were 70 to 100 million people practicing Falun Gong in China. Furthermore, as The Washington Post reported in 1999, many influential people in the party, the government, and the military practiced Falun Gong.

Yet in the summer of 1999, former Communist Party leader Jiang Zemin ordered the Falun Gong practice to be eliminated.

As a result, hundreds of thousands—possibly millions—of Falun Gong practitioners have been detained illegally in labor camps, detention centers, black jails, and state-run prisons, where torture, abuse, and death occurs routinely. According to the U.S. State Department and Congressional-Executive Commission on China reports, Falun Gong practitioners constitute the largest population of prisoners of conscience in China and are often the worst treated group.

Multiple independent investigators estimate that possibly hundreds of thousands of Falun Gong practitioners have been killed so that their vital organs could be extracted and sold for organ transplantation—a lucrative business in China.

In June 2019, an independent tribunal in London, chaired by Sir Geoffrey Nice QC (Queen’s Counsel), who worked at the International Criminal Tribunal and led the prosecution of Slobodan Milosevic, concluded in its final judgment that “Forced organ harvesting has been committed for years throughout China on a significant scale and that Falun Gong practitioners have been one—and probably the main—source of organ supply,” and the practice continues today.

Independent investigators David Kilgour, Ethan Gutmann, and David Matas concluded in their report that Falun Gong practitioners are not the only victims of this state-sanctioned forced organ harvesting.

“The Chinese Communist Party has engaged the State in the mass killings of innocents, primarily practitioners of the spiritually-based set of exercises, Falun Gong, but also Uyghurs, Tibetans, and select House Christians, in order to obtain organs for transplants,” the report says.

The legislators call on Xi Jinping to recognize the right to freedom of religion as asserted by the UN Universal Declaration of Human Rights, and to immediately end the persecution of all religions and “release the prisoners of conscience of all religions.”

The letter was presented to the Embassy of the People’s Republic of China in Vilnius, Lithuania, on Dec. 11.