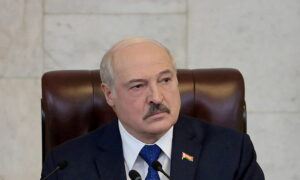 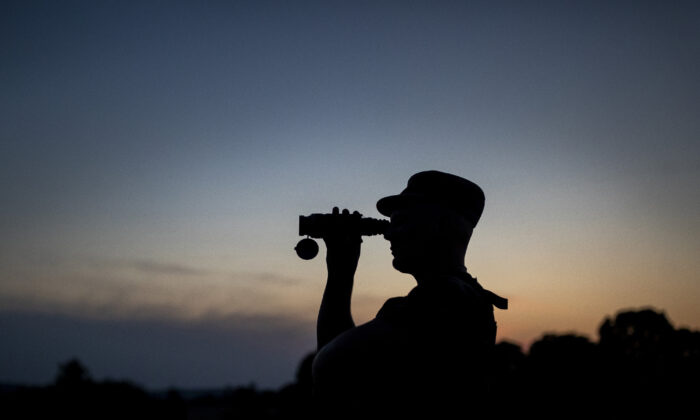 A member of the Lithuania State Border Guard Service looks through binoculars as he patrols on the border with Belarus, near the village of Purvenai, Lithuania, on July 9, 2021. (Mindaugas Kulbis/AP Photo)
Europe

Lithuania to Turn Migrants Crossing in From Belarus Away

VILNIUS, Lithuania—Lithuania has ordered its border guards to turn away, by force if needed, migrants attempting to enter the Baltic country as the rapidly growing number of immigrants illegally crossing from neighboring Belarus has emerged as a major foreign policy issue to the small European Union nation.

The Interior Ministry distributed a video footage shot from a helicopter as proof that large groups of immigrants were being escorted to the European Union border by vehicles belonging to Belarus’ border guard authority. Lithuania says the migrant influx in the past months is an act of retaliation by Belarus’ authoritarian President Alexander Lukashenko to increased sanctions by the EU toward his country over an air piracy incident.

Lithuania’s Interior Ministry said Tuesday that at least three large migrant groups were stopped in thick woods in the border area between the two countries, and Lithuanian border guards commanded them to return back to Belarus.

“First of all, [Lithuanian border] officers tell them [migrants] that they are lost; that they have arrived in the beautiful country of Belarus and got the wrong way while enjoying its nature but now they must continue the tourist track back into that country,” Vice Interior Minister Arnoldas Abramavicius told reporters.

If that method proved unsuccessful, he said Lithuania has reserved the right to use force to keep migrants away but “use of force depends on circumstances.”

“It can not be ruled out that [border guard] officers will face aggression” from migrants, Abramavicius said, adding the measures were necessary as crossing state border in such a way is an illegal act. “Lithuania can not accept this influx that grows day by day.”

Some 4,026 migrants, most of them from Iraq, crossed from Belarus into Lithuania, an EU and NATO nation of slightly less than 3 million, this year.

Lithuania officials estimate that more than 10,000 more migrants might try to arrive this year as the number of direct flights from Iraq to Minsk tripled in August and the country has no physical barriers for its almost 679-kilometer (420-mile) long border with Belarus.