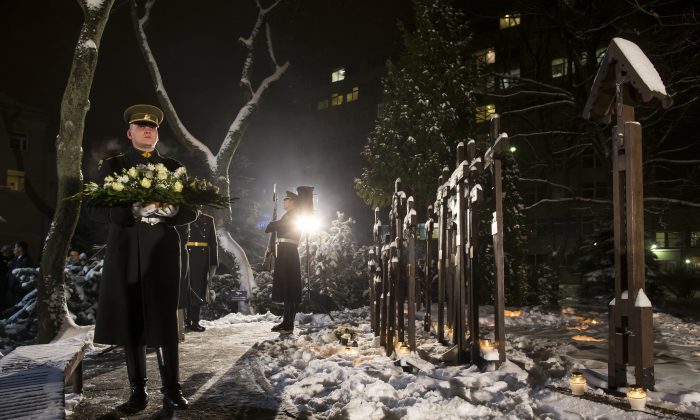 Lithuanian Army solders take part in a wreath laying ceremony on the eve of the 25th anniversary of the Day of the Defenders of Freedom "Battle for the Freedom of Nations" in Vilnius, Lithuania, Tuesday, Jan. 12, 2016. (AP Photo/Mindaugas Kulbis)
Europe

VILNIUS, Lithuania—With flowers and solemn speeches, Lithuanians on Wednesday marked the 25th anniversary of a deadly Soviet crackdown that failed to quash the Baltic country’s quest for independence.

Hundreds of people gathered in Vilnius in freezing temperatures to honor the 14 people killed when Soviet troops and tanks moved into a crowd of protesters outside a TV tower on Jan. 13, 1991.

The attacks only emboldened Lithuanians to demand freedom, which they gained later that year.

President Dalia Grybauskaite drew parallels between those events and Ukraine’s conflict with Moscow, saying “we feel a bond of unity with the people of Ukraine whose representatives are among us today.”

It was the first of a series of events planned this year in the Baltic countries to commemorate the end of the Soviet occupation.

The attack on the TV tower in Vilnius and another in neighboring Latvia a week later that left five dead was a last show of force for Soviet troops that had occupied the Baltic countries since World War II.

The bravery and defiance shown by unarmed Lithuanians in the face of Soviet guns and tanks remains a huge source of pride for the country of 3 million. More than 1,000 people were injured in the crackdown.

“We will never forget what happened then,” said Julius Kazlauskas, a 32-year-old engineer, who came to Parliament with his toddler son.

“I was just a kid back them, but remember my parents were scared,” he said. “It was people, not some army, who defended their country and right to be free. And look at us now: We are members of the EU and NATO, our economy is among fastest growing in Europe.”