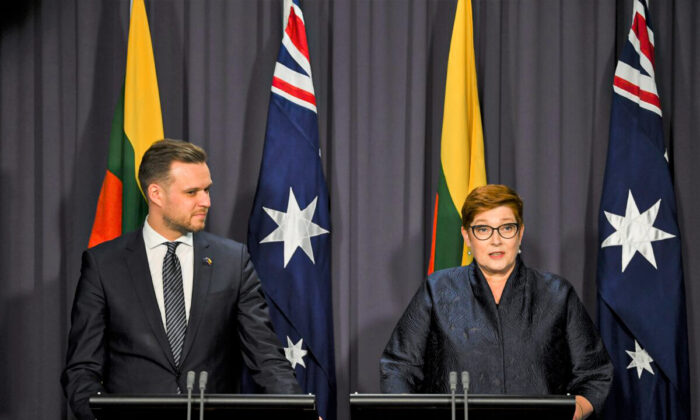 Lithuania’s foreign minister has called on democratic allies to band together against the “disruptors” of the global rules-based order—Russia and China.

Foreign Minister Gabrielius Landsbergis is currently on a three-day visit to Australia to strengthen trade ties and help establish the Baltic nation’s embassy in the country.

Australia and Lithuania have both been on the receiving end of extensive trade sanctions by the Chinese Communist Party (CCP) because of perceived slights toward Beijing.

Landsbergis told the Australian Financial Review that the decision for an official visit was struck when he met with Australia’s Foreign Minister Marise Payne at the U.N. General Assembly in New York in September 2021, when they “immediately understood” the need for more dialogue in response to Beijing’s actions.

“For quite a while, Australia was one of the main examples when China was using economy and trade as a political instrument or one might say even as a political weapon,” Landsbergis said during a press conference with the Australian foreign minister in Canberra on Feb. 9.

“Now, Lithuania joins this exclusive club. But it is apparent that we are definitely not the last ones, especially if these practices are not stopped with the instruments that we have.”

The CCP’s move was carried out in response to Lithuania’s decision to permit Taiwan to open a diplomatic office in its capital, Vilnius, using the word “Taiwan” rather than “Taipei”—a practice commonly adopted to avoid offending Beijing’s One China policy.

“I think we need to remind countries like China, or any other country that would wish to use trade as a weapon, that the like-minded countries across the globe have tools and regulations that help to withstand the coercion and not to give in to political and economic pressures,” Landsbergis said.

He called Russia and China “disruptors of the global rules-based order.”

“It’s not just an Indo-Pacific regional issue or European regional issue,” he said. “They are global players that are acting disruptively.

“We have to ask, act ‘counter-disruptively’—that means reassuring and strengthening our ties.”

The foreign minister has also backed a free trade deal between Australia and the European Union—an agenda that stalled late last year after French leaders reacted negatively to Australia’s decision to sign on to the AUKUS deal with the UK and the United States.

Meanwhile, Payne said it was “really significant” that Landsbergis went ahead with the trip to Australia amid “increasing tensions in Europe.”

“We are standing here with a European foreign minister who has made the trip in the face of very difficult, and increasingly difficult circumstances in Europe and that is, in political parlance, voting with your feet,” she said.

Payne wouldn’t be drawn on when or how Australia would react to any conflict on the Ukrainian border.

“I’m not going to speculate on what red lines are—I would prefer to deal in the reality of events, and I hope that they are not right,” she said.

“I hope that the diplomatic efforts which are being made by a number of leaders, in engaging with President Putin and the Russian administration, are able to persuade Russia that this is not a step that they should take.”

Landsbergis said he has “all the trust” in Australia to act if a conflict erupts along the Ukrainian border.

“Recent events show that all the like-minded countries have a similar reaction towards what’s happening on the Ukrainian border,” he said.

This is the first of a full week of meetings for Payne, who will be hosting a “Quad” dialogue in Melbourne in the coming days, with U.S. Secretary of State Antony Blinken arriving for the talks between the leaders of the United States, India, Japan, and Australia.