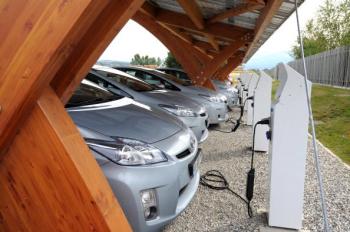 PLUGGED IN: Hybrid cars are plugged in as part of a research effort at the National Institute of Solar Energy (INES) in Chambery, France. Last month, the French Atomic Energy and Alternative Energies Commission (CEA) took some 100 researchers to work on new lithium-based batteries for electric cars.(Jean-Pierre Clatot/Gettty Images )
Business & Economy

Heide B. Malhotra
View profile
Follow
biggersmaller
Print
Lithium, a soft silver-white metal, is predicted to turn into the most sought after chemical element by the world’s industry sectors.

Lithium is the first member of the alkali metal family and is in high demand. It is used in all types of batteries (25 percent of world production in 2008), added in small quantity to glass and ceramics to make them stronger (18 percent), is in industrial grease used by the automotive, aircraft, and marine industries (12 percent), and is also used to treat bipolar disorder (7 percent). Other uses for the commodity include aluminum production, air-conditioning systems, chemical processes, as well as other industrial uses.

Lithium “lies under a windswept sea of sand 50 times drier than Death Valley” and “has become the most sought-after—and fought-over—commodity on the planet,” according to an article on Money Morning, an investment research website.

Spot Price Versus Cost of Metals
An investor could easily find the market prices for commodities such as gold and silver, but a spot price for lithium remains elusive despite the metal’s popularity.

“There is no international lithium spot price,” according to a report on Rare Metal Mining’s website.

According to the report, researchers contacted George Sandor, sales and marketing director at FMS Corp., who said that his company trades 90 different types of lithium and each is valued differently.

“It is important to note that the market could easily absorb a significant increase in lithium price, many multiples its current pricing, without negatively impacting the cost of batteries as the actual raw cost of the lithium in vehicle batteries is currently less than 3% as a proportion of cost,” according to the report.

When looking at lithium from a pure cost point view, this chemical element should be one of the cheapest commodities. Every piece of the earth’s crust contains traces of lithium.

In May 2010, the spot price for lithium used in batteries was $70 per pound, according to Rare Metal Mining.

Talison Lithium Ltd., located in Western Australia, is known to produce the purest lithium in the world. Talison is followed by Orocobre Ltd., another producer based in Australia.

The companies selected for the Byron Lithium Index “are exploring for, or producing lithium properties as primary business” and must be listed on five stock exchanges, including the New York Stock Exchange and the Australian Securities Exchange.

Claiming a Stake in Lithium Production
“The world’s biggest players are wasting no time staking their claims to control the Third Element [lithium]. Just look at the first steps being taken in this race,” said the report on the Money Morning website.

The report stated that Korea, Japan, and other Asian nations had stockpiled 150,000 tons of lithium produced in Western Australia. China revealed that it would increase its 2011 production of lithium by almost 500 percent over its production in 2010. The present U.S. administration has allocated $25 billion and already distributed $8 billion for the production of electric cars, which require lithium batteries, to the Ford Motor Co., Nissan Motor Co. Ltd., and Tesla Motors Inc.

General Motor’s electric hybrid car Volt, the Mercedes S400 hybrid sedan, and most other electric and hybrid vehicles will run on a lithium-ion battery pack.

“Interest and demand in lithium minerals has increased significantly, driven by the increased importance and production of lithium-ion batteries as the next generation power source,” according to Rare Metal Mining.

But, as predictions go, no one can truly predict if lithium is going to be a high volume traded item, or if new technology will be discovered that could make the metal obsolete in battery production.

“The problem with predicting the demand for the future use of lithium in transportation as a preferred medium of energy storage is that no one actually knows just how enthusiastic the trend will be,” according to the Rare Metal Mining website.

“Recently, Bolivia has become the nerve center of Latin America, attracting the interest of several multinational companies. The reason: the world’s largest reserves of lithium are in this country, in the Salar (Salt Flats) de Uyuni,” according to a study published by Knowledge@Wharton (KW).

Automobile companies have been lining up to contract for lithium. Evo Morales, president of Bolivia, has offered joint ventures with global companies, including Mitsubishi Motors Corp., Nissan Motor Co. Ltd., Ford Motor Co., BMW AG, and others, but companies are having second thoughts, given the past nationalization of Bolivian petroleum and natural gas firms.