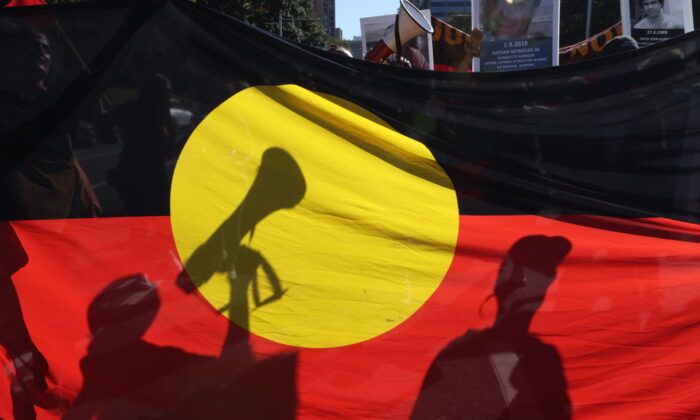 Protesters are seen through an Aboriginal flag during a rally in Sydney, Australia, on April 10, 2021. (David Gray/Getty Images)
Viewpoints

Listening to the Voice

In 1967, 55 years ago, a referendum was held in Australia to allow a change to the Constitution that would remove the last impediment to the recognition of our Aboriginal people as full citizens.

Australians are slow to accept constitutional changes: we have held 44 referenda since federation, but only eight of them returned a positive result.

Yet the 1967 referendum succeeded dramatically—90.77 percent voted YES. It was an extraordinary outcome. It’s a matter of lasting pride to me that I was among those of the voting public who voted in favour.

Of course, 1967 was the era of the student revolution worldwide. Young people were in ferment. Demonstrations demanding change were frequent and often violent. Everywhere policies were changed and governments fell in response to passionate radicalism.

Some will remember the old cry: “One two three four. We don’t want your [expletive] war!”

So was the 1967 constitutional change just a consequence of youthful zeal? Of course not. A 90 percent YES vote can only be explained by a huge cross-generational shift in thinking. Those of us who were young at the time agreed with the shift, but we hadn’t initiated it. It was the fruit of many years of reflection, of the good intentions of a society that wanted to be just and fair.

Half a century later, this has mostly been forgotten. In our modern pessimistic world, few can imagine, and few could even bring themselves to believe that their grandparents actually felt strongly about the Indigenous cause.

Isn’t it common knowledge that my generation were vicious racists? Hey, Gough Whitlam didn’t even become prime minister till 1972! How could we have done anything half-decent before his visionary leadership woke us all up?

But the fact is that we did. And you can meet many older people (if you try) who went to school with Aboriginal mates and played sports with them.

They’ll often tell you now that things have changed since those times. The two communities are actually growing further apart, not closer together as we hoped they would. That was just the dream some of us had.

In my personal experience, I can recall no ill will towards Aboriginals in early schooling.

Those who taught us about them did so with respect, warmth, and not a little sadness. We all knew that we had taken their land, but we also realised that, in the cities at least, their dispossession had been complete and that there was no way back—especially at a time when immigration into Australia was further enriching the mix and changing our understanding of what it meant to be Australian.

From the 50s onwards, “New Australians” were living side by side with us and with the oldest Australians of all; our agreed common goal was integration.

Since these exciting events two generations ago, relations between the ethnic groups have worsened. Billions have been spent, millions have been wasted, interracial discord has grown more bitter, Aboriginals continue to feel neglected, and poorer white people are becoming increasingly resentful of financial advantages going to fellow citizens who identify as Indigenous.

On top of this, the far-from-clarion call for an Indigenous Voice, ill-defined as it is, feeds the disquiet. Fifty percent of the land area of the continent has now been ceded to Indigenous owners. Talk of “treaties” strongly suggests that we must look forward to a future of further alienation of large tracts of our country from the majority of its citizens, of bargaining and bartering, of endless disputes over compensation and requital.

It’s not a pretty picture, and it can’t end well. I predict that the government’s proposed referendum, unlike the one that preceded it half a century earlier, will fail.

You would have to be foolishly naive to imagine that the lead-up to the referendum will not give rise to a great deal of straight talking about the nature and definition of Aboriginality, much of which will be castigated as “hate speech” by those who disagree with it.

It will be unpleasant but necessary. People will demand clarity on the definition of Aboriginality. There is ample evidence already that Indigenous elders are seriously embarrassed by the rising numbers of people claiming to be Indigenous on the basis of the most tenuous family connections.

People with strong ties to their Indigenous heritage rightly fear that unfounded claims, particularly when used to substantiate applications for funding and other benefits, can hijack their cause.

Government Duty to All

If the referendum fails, enormous and bitter disappointment will follow: a defeat would be a deeply sad psychological blow to those honest and honourable members of the Aboriginal community who have been led to set their hearts upon a new victory. It is hard to see harmony emerging from an emotional morass of dashed hopes and shattered dreams.

Our best hope is that we can avert this tragedy by side-stepping and looking for other ways of defining ourselves.

Fortunately, some high-profile Aboriginals, such as Jacinta Price, newly-elected Senator for the Northern Territory, show us a way forward. When race is the chief criterion for making judgements about spending public monies, the result is race-based paternalism, otherwise known as apartheid.

By a strange and horrible irony, what we seek to avoid will be what we’ll get unless we can step back and recognise that governments have a duty and obligation to all people in need, without regard to race or background.