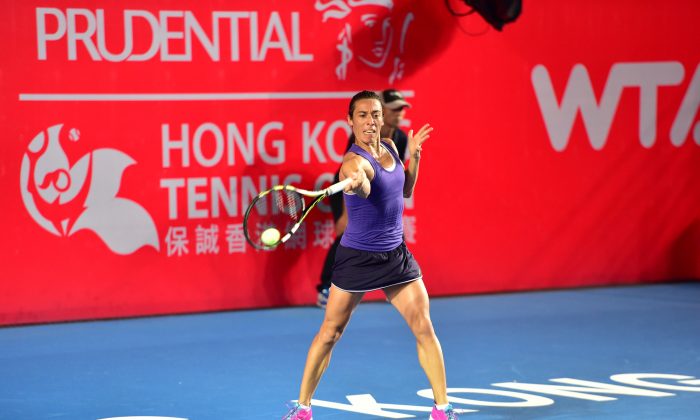 Looking fit and in good shape Schiavone performed in Hong Kong’s heat and humidity throughout the week seemingly with little difficulty, matching younger players and winning through to the later stages of this first WTA accredited Open tournament in Hong Kong for 20 years.

Schiavone surprised Christine Mchale of the United States in the first round of the competition hitting back after losing a tough second set 5-7, to take the 3rd set and win the match 6-4, 5-7, 6-2. In the 2nd round she progressed with a win against Kimiko Date-Krumm of Japan and then to beat Jane Ceelova of Slovakia in her Quarter Final.

In the Semi-final Lisicki took the 1st set 6-3 and things looked like they would progress in orderly fashion through the rest of the match but Schiavone now 34 years old and with a WTA Rankings of No. 74, had other ideas.

After losing the 1st set 3-6, Schiavone returned the compliment by taking the 2nd set by the same margin with her traditional brand of shot variety, grit and determination.

The enthusiastic crowd got fully involved and were loving the encounter, encouraging both players and delighted that the entertaining match progressed to a 3rd set.

Naturally pleased with her performance in the 2nd set, Schiavone was in full flow and continued in the same vein in the early stage of the 3rd set, edging ahead 2-1.

But Lisicki was in no mood to surrender the match, she regrouped, upped her game and the aces started to flow taking the next 5 games to win the match 6-3, 3-6, 6-2. Although in control, it was by no means an easy set for Lisicki. Schiavone, with good crowd support, waiting for the chance to hit back but Lisicki continued the pressure to win the contest.

The enthralled crowd gave long applause of appreciation to both players as they left the arena.

Earlier in the afternoon, Karolina Pliskova of Czech Republic beat Alison Van Uytvanck6-1, 4-6, 6-4 in the other Semi-final to set up a Final clash with Lisicki to be played on Sunday Sept 14.