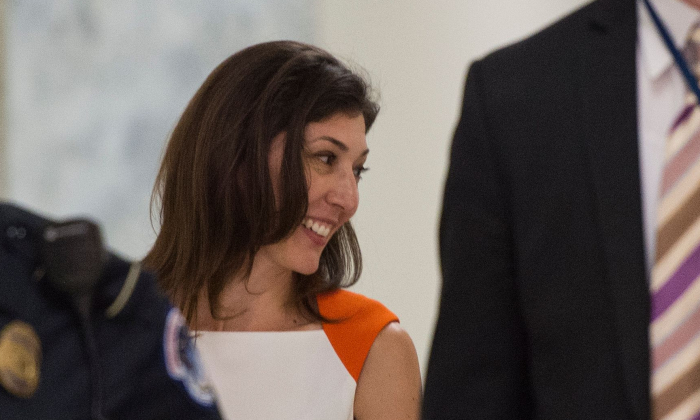 Lisa Page Testimony: FBI Had No Proof of Collusion at Time of Mueller Appointment

At the time that Robert Mueller was appointed special counsel in May 2017, the FBI didn’t have evidence to determine whether the Trump campaign had colluded with Russia, according to excerpts of a closed-door interview between congressional investigators and former FBI attorney Lisa Page obtained by The Hill and Fox News.

Page became one of the faces of the FBI’s probe of the Trump campaign after the public release of her biased text messages with then-FBI Deputy Assistant Director Peter Strzok.

When Page testified before on Capitol Hill in mid-July, lawmakers pressed her on the meaning of a text message, in which Strzok spoke of joining Mueller’s team. Strzok sent the message on May 18, 2017, the day after Deputy Attorney General Rod Rosenstein appointed Mueller to take over the FBI’s investigation of the Trump campaign.

“Who gives a [expletive], one more [assistant director]…[versus an] investigation leading to impeachment? … You and I both know the odds are nothing,” Strzok wrote. “If I thought it was likely, I’d be there no question. I hesitate in part because of my gut sense and concern there’s no big there there.”

Page told lawmakers that she took the message to mean that the FBI didn’t know if the Trump campaign colluded with Russia.

“I think this represents that even as far as May 2017, we still couldn’t answer the question,” Page said.

Page’s admission is a blow to the foundation of the special counsel investigation because Mueller took over the FBI probe upon appointment.

The bureau had officially investigated the Trump team for more than nine months by May 2017. The bureau used, among other tools, a highly intrusive surveillance warrant to spy on former Trump campaign volunteer Carter Page.

Rep. Jim Jordan (R-Ohio) told The Hill that throughout her testimony, Lisa Page seemed to indicate that there was no real evidence of collusion all the way until Mueller’s appointment. Jordan said the admission isn’t a surprise, considering the fruits of Mueller’s work to date. The special counsel hasn’t produced any evidence or indictments related to coordination between the Trump campaign and Russia.

Lawmakers pressed Page about the same text message on several occasions. Rep. John Ratcliffe (R-Texas) asked Page if Strzok believed “the odds were nothing and that he had a concern that there was no big there there regarding any collusion.”

“No, I don’t think so,” Page replied. “I think it’s a reflection of us still not knowing… It still existed in the scope of possibility that there would be literally nothing, probably not nothing nothing, as we probably knew more than that by that point.

“But in the scheme of the possible outcomes, the most serious one obviously being crimes serious enough to warrant impeachment; but on the other scale that, you know, maybe an unwitting person was, in fact, involved in the release of information, but it didn’t ultimately touch any senior, you know, people in the administration or on the campaign. And so the text just sort of reflects that spectrum,” she said.

Page’s testimony isn’t the first time that lawmakers learned about the lack of evidence of collusion in the days leading up to Mueller’s appointment. Former FBI Director James Comey told Congress that shortly after he was fired on May 9, 2017, the FBI “did not have an investigation focused on President Trump.”

Inspector General (IG) Michael Horowitz questioned Strzok about the “no big there there” text message as part of the IG probe into the FBI’s handling of the Clinton-email investigation. According to the final IG report (pdf), Strzok told the IG that the text meant that he was still not sure if the there really was “a broad, coordinated effort” between the Trump campaign and Russia or if what the agents have dug up was “simply” the work of “a bunch of opportunists seeking to advance their own or individual agendas.”

The combined doubts by Strzok, Page, and Comey in May 2017 add up to an alternate reality compared to the media reporting on the Russia-collusion narrative at the time. Headline after headline implied that Trump associates were in cahoots with Moscow. Congressional investigators have since learned that Strzok, Page, and scores of FBI officials were in regular contact with the media and appear to have leaked information potentially damaging to the Trump administration.

The leaking preceded the Mueller appointment and continued after it. In December 2016, Strzok wrote to Page that the FBI’s sister agencies were “leaking like mad” and in April 2017, Strzok told Page of a “media leak strategy.”