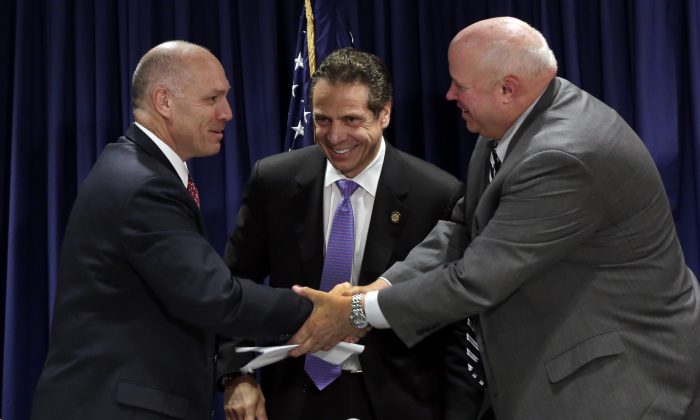 NEW YORK—The Metropolitan Transportation Authority reached a contract agreement on Thursday with unions representing workers on the Long Island Rail Road, averting a strike that would lead to nightmare commutes for many of the railroad’s 300,000 daily riders.

Gov. Andrew Cuomo announced the deal in Manhattan in the early afternoon. Under the contract, the workers would get 17 percent raises over six-and-a-half years and will contribute a portion of their salaries towards health insurance costs. The contract’s term is midway between the six years asked for by the unions and the seven years sought by the authority.

Specifics of the agreement will not be released to the public until they are presented to the union’s rank-and-file-members. The final contract will take weeks to draft, according to Kevin Ortiz, a spokesman with the MTA. It will be subject to approval from eight of the railroad’s unions and the authority’s boards.

Cuomo said that the final agreement was a compromise, striking a balance between employee benefits and the fiscal needs of the MTA, a public entity funded by taxpayers and commuter fares.

“We wanted fair compensation for valued employees and we wanted to make sure that the MTA didn’t need to raise fares and had the funds needed to maintain the system long-term and I believe that we did that,” Cuomo said.

United Transportation Union Chairman Anthony Simon, a negotiator representing the LIRR unions, said that the agreement is “ratifiable and fair.” According to Cuomo, the settlement is based on the recommendations of the two Presidential Emergency Boards appointed by President Barack Obama. Both boards recommended 17 percent increases over six years and that union members pay a portion of their salaries for health insurance, with average monthly costs rising to $152 by 2015.

The MTA wanted new employees to contribute more towards healthcare than current workers to offset the costs of the raises, but the unions rejected that offer. Though the terms of the compromise are not clear, Cuomo said that new employees will indeed contribute to savings for the MTA through health and pension contributions, and wage progressions different from current workers.

Another Notch for Cuomo

The governor kept out of the negotiations until Wednesday morning, when he called on the parties to return to the bargaining table. When the conversations didn’t bear fruit, the governor joined the talks directly.

The negotiations proceeded late into the night, with Cuomo calling to reconvene at his Manhattan office on Thursday morning. Early Thursday afternoon a smiling Cuomo announced an agreement alongside Simon and MTA Chairman Tom Prendergast.

In April, Cuomo sealed a deal with the Transportation Workers Union, which represents 34,000 bus and subway employees. Late last year, he reached an agreement with Con Edison to freeze base electricity and gas rates.

“It’s classic Cuomo to jump in and take credit for the MTA deal, when only a couple of days ago he was telling affected Long Island commuters and businesses that a strike wouldn’t be a big deal and it wasn’t his problem,” Astorino said in a statement.

The state’s comptroller Tom DiNapoli said that a strike would be “a devastating blow” to the region with estimated economic costs of $50 million per day.

“All riders feel relief at the announcement of this settlement,” said Mark Epstein, chairman of the Long Island Rail Road Commuter Council, an advocacy group. “We are encouraged by Gov. Cuomo’s assurances on fares and the MTA’s ability to fund its capital program, and look forward to reviewing additional details on the settlement and the way in which it will be funded.”

A Sigh of Relief

Commuters at Penn Station in Manhattan expressed relief that they would not have to seek transportation alternatives.

“I was really concerned,” said Sibel Aras of Port Washington. “It’s really good news. I’m happy for them. They deserve it.”

“His taking last minute efforts to avert what could be a crisis is good, whatever it takes,” Bartner said. “It got done. I hope the terms are fair to employees.”