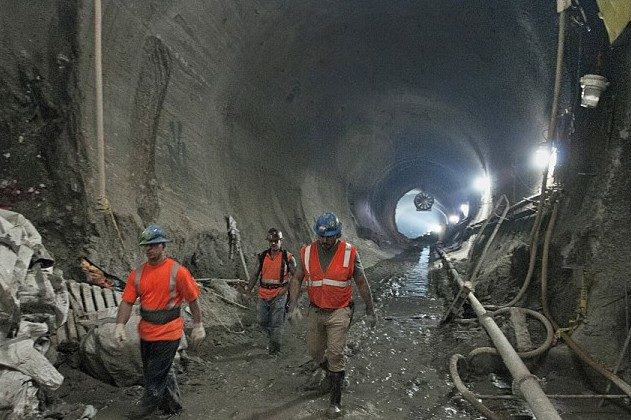 Workers walk through the East Side Access under Grand Central Station in January of 2012.(Photos Courtesy MTA/Patrick Cashin)
US

NEW YORK—Long Island Railroad passengers looking forward to hearing the words “next stop Grand Central Station” may have to wait until 2019, adding another year to the already heavily delayed East Side Access project.

“We were originally looking at 2018, but the most recent analyses puts the opening at 2019. I don’t want to see it go past 2019,” MTA Chairman and CEO Joseph Lhota said to the Long Island Association (LIA) on Tuesday, according to libn.com.

The issues stem from the Queens side of the project near a rail yard in Jamaica. Contaminated soil that needs to be disposed of properly and soft ground are part of the reason for the delays. Lhota also said that LIA workers have discovered springs and brooks in their underground digging that have proven to be an obstacle.

Experts from Europe have been brought in to assist with a new plan, according to libn.com.

A spokesperson with the MTA issued a statement Tuesday evening saying they were in the process of re-evaluating the construction schedule and would be presenting their findings to the Capital Program Oversight Committee later this month.

“The analysis is not complete, and the MTA is identifying ways to mitigate those risk factors to allow the project to be completed as early as possible,” the statement reads.