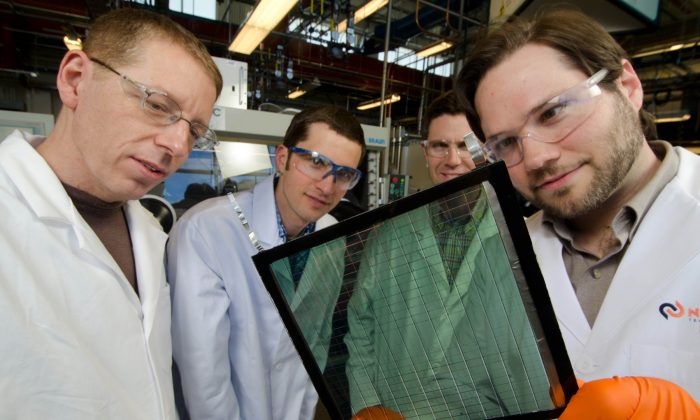 “After years of research and development we are heading toward the finish line in the next 28 months predicated on raising capital,” Conklin said. “There’s still a lot of commercial development to complete but the tinkering is over!”

Conklin says he’s not making any promises he can’t keep. The success of the commercialization plan relies upon the company’s team keeping a “laser focus” on achieving certain goals and on investors remaining engaged and interactive.

The technology is a combination of organic polymers, carbon, and hydrogen, which convert the sun or artificial light sources into electricity when applied as a film layer to windows, Conklin told the Epoch Times in a July interview. Its makers have said it’s engineered to outperform rooftop panels by 50-fold, and at a fraction of the cost with only a one-year payback.

“Our technology is an industry breakthrough and it does work,” said Conklin.

Patrick Sargent, owner of Corona Solar Group and a former leader at AGC Flat Glass North America, said in the webcast the most impressive feature of the technology is how it’s being developed to integrate with glass.

Currently an adviser at Solar Window Technologies with past experience in glass manufacturing, Sargent has seen many different solar technologies, but credits SolarWindow for its manufacturability, calling it one of the most compelling features.

The coatings are applied to the inside of the glass and not the outside surfaces to prevent breakdown from harsh weather conditions and washings.

“SolarWindow production can be done very easily without disrupting existing processes because it can be applied after the window making process is done,” he said.

He estimates the cost to install a SolarWindow is almost the same as it costs to install regular skyscraper windows today, with the added cost for an electrician to make the electrical connection.

But these goals can’t be met without achieving the goal of raising more capital.

Conklin said the company is privileged to have a principal investor, the founder of Solar Window Technologies, Harmel Rayat, who the company has primarily relied upon for a long time. “He knows the technology, he knows the staff, and he believes in its huge commercial ability,” Conklin said.

The confident CEO made clear that other investors do approach the company, “a lot,” but the key is to ensure they have the best interests of the company at heart, he said. “We’re looking for long-term repeat investors.”

The company is hoping to generate revenue through licensing and sales, but Conklin recognizes that in order to build the brand, investors need to be involved.

In a message to investors, Conklin said: “Thank you. You are the owners of our business. I want every owner to act like owners and spread our news; talk about SolarWindows, interact and act favorably as any owner would.”